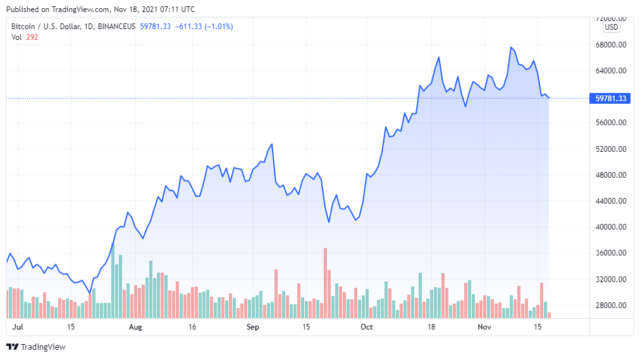 Was it irresponsible of us to state that Taproot would “enable smart contract deployment”? Maybe it was. Bitcoin received its first major network upgrade since 2012, and users and publications alike are still trying to figure out what Taproot means for the ecosystem. To complicate the picture even further, Layer 1 received the changes and new tools. However, the upgrade will benefit wallets, other services, and Layer 2 solutions like the Lightning Network. And the changes will come gradually, as developers experiment with these new tools.

Related Reading | Bitcoin Taproot Is Around The Corner

Over the weekend Udi Wertheimer, Ethereum supporter and professional troll, send shockwaves through Bitcoin-Twitter as he called Taproot a scam and claimed it wouldn’t bring any benefits to the average user. His claim was that, even with Taproot, Bitcoin can’t deploy expressive smart contracts like Ethereum or Solana. And he might be right.

honest tldr on the benefits taproot brings to the average bitcoin user: there are none

That tweet received replies from Bitcoin luminaries like Adam Back, Jameson Loop, and Alex Gladstein. So, of course, Wertheimer exploited the topic over the weekend. He did this a poll, and a third of the people seem to think that Taproot will bring expressive smart contracts to Bitcoin.

and you’re telling me there’s no misinformation problem

a’ight i’m done talking about this for a while do whatever you want pic.twitter.com/hKzYNHZwaK

Are they all wrong? Is there a misinformation problem? Or is a mix-up of concepts causing the confusion? Let’s get to the bottom of this by consulting the experts.

According to security expert Brian Trollz, Bitcoin is able to run smart contracts because every transaction in the network is a smart contract. He goes beyond and says that Bitcoin can do expressive smart contracts.“The term you’re looking for is “fully expressive” I.e. Turing complete,” Trollz says establishing what Bitcoin can’t do. “Thats a feature not a bug,” he adds.

And to all the people saying Bitcoin can't do "expressive" smart contracts, yes it can. The term you're looking for is "fully expressive" I.e. Turing complete. Thats a feature not a bug. Cope harder.

He also provides the official definition of smart contract by Nick Szabo, the person who coined the term.

Its what the term means. Learn your history: pic.twitter.com/ynCOYUB2zN

The creator of Stacks, a layer 2 platform for smart contracts, clarifies that Taproot doesn’t bring “fully expressive smart contracts. You are still limited by Bitcoin Script, i.e, limited contracts.” Muneeb Ali adds that “Taproot is in-line with the Bitcoin design philosophy to keep the base layer simple.” And feels like fully expressive contracts don’t belong on Bitcoin’s Layer one.

Taproot is in-line with the Bitcoin design philosophy to keep the base layer simple, and I fully support that design.

Taproot achieves that goal. Let’s not confuse it with expressive contracts; you don’t want them at Bitcoin base layer.

In a recent interview with Bitcoinist, Antoni Trenchev clarifies the limitations of Taproot contracts. He also tells us the reasons why those limitations are a good thing for the network.

“Although Bitcoin is capable of smart contract deployment after the upgrade. The aim of enabling smart contracts is to increase the efficiency and flexibility of the Bitcoin payment function, not to support Dapps. Therefore, it might be impractical to deploy the same scale of smart contracts on Bitcoin as on Ethereum and is also dangerous for the bitcoin network in terms of network security and speed. It will fundamentally harm the basic function of bitcoin as a digital payment system.”

In their report on Taproot, the research team at Coinshares elaborates on the smart contract’s subject.

“To be clear, Taproot will not enable the same fully expressive and recursive smart contracts that exist in alternative blockchain systems (Ethereum, Solana etc.) and this will almost certainly never happen as recursive smart contracts are widely considered to be unacceptably risky for Bitcoin. That said, with Taproot the programmability of Bitcoin transactions will increase to a higher level than what was previously possible, all with the expectation that the improvements will not introduce any security vulnerabilities.”

Ok, we’ve already established what Taproot contracts can and cannot do. A pseudonymous Twitter user who’s been studying the subject gave us a new way to look at the problem. He or she thinks that Taproot IS the foundation for smart contracts. That “greater expressive abilities” on layer 1 are not a priority, because “Smart contracts are spending decisions between a group of participants who value privacy. Enabling this efficiently should be the goal.”

using this as a foundational base layer, the expressiveness is delegated to a layer 2, above the #bitcoin mainchain

Leaving this open lets everyone else figure out how to enable expressiveness while retaining privacy, efficiency and the core requirement of a contract: decisions

By leaving the expressiveness of the contract to layer 2, the network retains “privacy, efficiency and the core requirement of a contract: decisions” in layer 1. He concludes that “Taproot is very likely the best upgrade to bitcoin so far and we will see an explosion of taproot powered contracts once this becomes obvious.”

Even though Udi Wertheimer was trolling, he accused the Bitcoin community of deliberately not making the limitations of Taproot contracts clear. As we clearly demonstrated, the information was abundant and out there all along.

Featured Image by Thomas Gamstaetter on Unsplash – Charts by TradingView