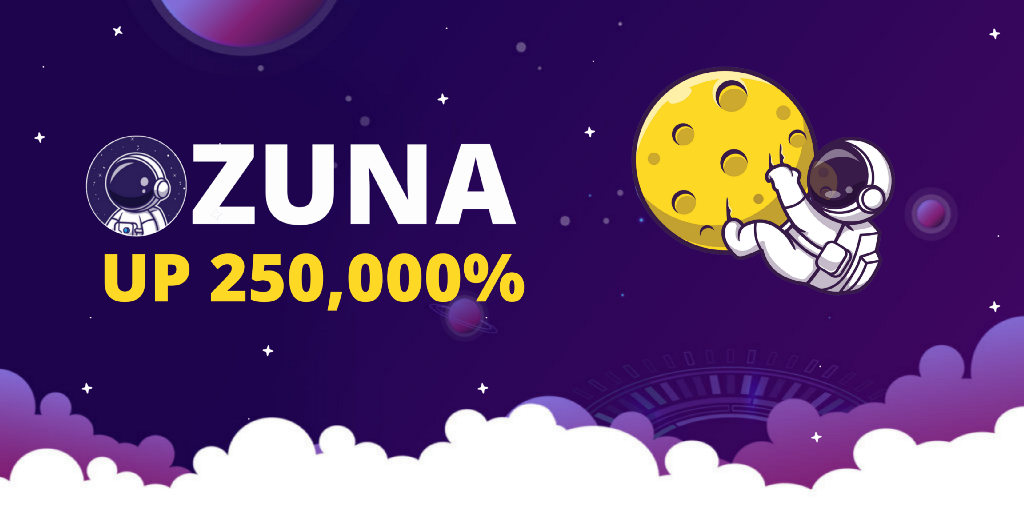 ZUNA, a deflationary token built for several future projects, is happy to announce that its project was among the top gainers in the crypto market in the last three days. ZUNA has hit the market and gained exponential popularity in the crypto community.

ZUNA coin was recently listed on coinmarketcap and coingecko, the top crypto trackers in the space. Since then, its price shot up abruptly by 250,000% and gained 14,000 more holders in less than a month with no sign of slowing.

With an official launch roughly two weeks ago, ZUNA is already gaining massive traction. The main mission of the ZUNA project is to progress its growing community and reach out to more people. The platform has rapidly climbed up in the coinmarketcap rankings from position 6000 to around 3000 in less than two weeks.

ZUNA boasts some unique features that are built to reward investors. 5% of every transaction is redistributed to all existing hodlers.

In addition to rewarding ZUNA investors, according to their official website, ZUNA’s liquidity pool (LP) is vital in stabilizing its prices. In every transaction, ZUNA takes 5%, which is automatically locked for stability.

This project is still new and has plenty of room for growth. With a growing community behind them, ZUNA will begin working on their exclusive NFT collection drop scheduled for January of 2022.

According to ZUNA’s roadmap, the team will follow up their NFT collection drop with plans on building an NFT marketplace where artists can create and sell their artwork. ZUNA also has future plans to introduce a crowdshare feature where multiple investors can own and sell a fraction of highly valued NFT’s.

Exchange listing is an essential step in the roadmap of ZUNA that the team project will boost its adoption status in the crypto community. Currently, PancakeSwap is the exclusive exchange offering ZUNA. However, ZUNA plans to launch an all-around exchange suitable for both beginners and expert traders. The exchange will be accessible via mobile, where users can securely store the assets.

ZUNA is community-oriented and invites early investors to be part of its innovative trajectory. With everything they have planned it is clear that ZUNA is a project to keep your eyes on in the coming months.

Please connect with the platform’s team by joining their Telegram Group or following them on Twitter for more information.

Disclaimer: This article is not intended to be a source of investment, financial, technical, tax, or legal advice. All of this content is for informational purposes only. Readers should do their own research. The Capital is not responsible, directly or indirectly, for any damage or loss caused or alleged to be caused by reliance on any information mentioned in this article.

ZUNA Coin Listed on Coinmarketcap and Coingecko, Price Rises by 250,000% was originally published in The Capital on Medium, where people are continuing the conversation by highlighting and responding to this story.