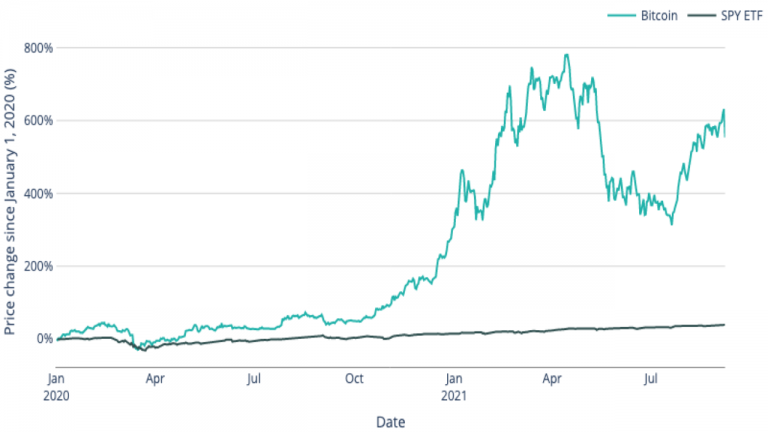 Since the beginning of the COVID-19 pandemic and after an initial dip, the stock market has performed exceptionally well for such an economically uncertain time. The SPDR S&P 500 electronically traded fund (ETF), which provides a good indicator of the stock market’s overall performance, has increased in value by 32% year-over-year (YoY) and 39% since the beginning of January 2020.

While these returns are impressive, the performance of Bitcoin has surpassed expectations and greatly exceeded the performance of the S&P 500. Bitcoin’s value has drastically increased by 554% since the beginning of 2020 and by 352% YoY. As Figure 1 highlights, these are far beyond those of the stock market and most any other asset class. Bitcoin’s price during this time rose from $7,175 and $10,382, respectively, to $46,898.

For the past 4 years, Cash2Bitcoin has helped new investors across the United States gain access to this asset by providing physical locations where Bitcoin can be purchased, in the form of ATMs. Ubiquitous access to these ATMs has enabled investors at all levels to reap the benefits of this growing asset. 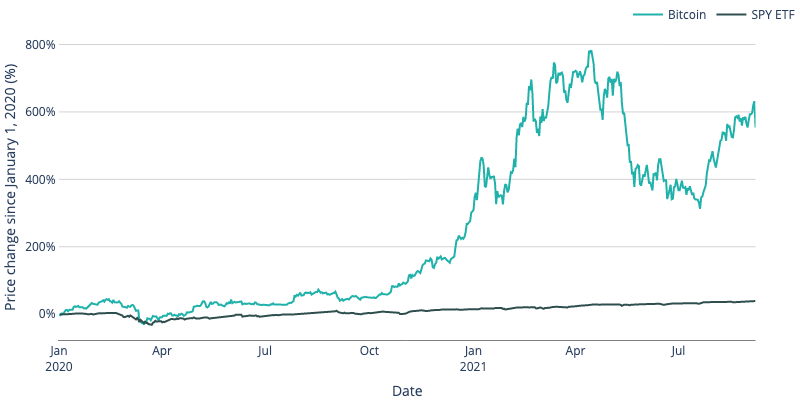 Investors rewarded throughout the pandemic 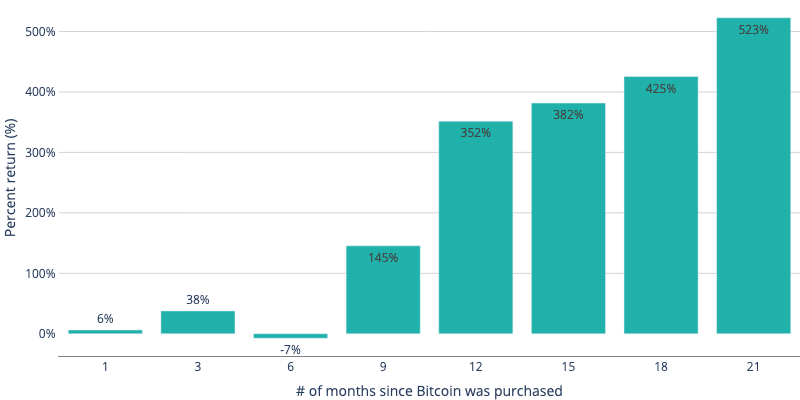 Excluding the period of six months ago, individuals who purchased Bitcoin at any of these periods made gains averaging 267%. Although the prices decreased approximately six months ago, hence the return of -7% if it was purchased then, the price has been steadily rising and may reach its peak again soon.

Even before the pandemic began, Bitcoin started finding its way into the portfolios of retail and institutional investors. Bitcoin’s performance during the past year and a half has created a positive feedback loop, with its price skyrocketing from $7,175 to just above $63,000 at its peak—a price it may very well reach again soon. Cash2Bitcoin is a key enabler of this uptick in the United States, having deployed over 470 Bitcoin/crypto ATMs across the country. Cash2Bitcoin also supports hundreds of other independent operators by providing customer support services, monitoring machines, and purchasing and exchanging Bitcoin on their behalf.

Unlike acquiring Bitcoin through online exchanges, using Cash2Bitcoin ATMs requires no more technical savvy than using a traditional ATM. Individuals simply deposit their cash and have Bitcoin directly deposited to their virtual wallets or can print a temporary QR code that can be used to deposit the Bitcoin into a digital wallet later on. This has reduced barriers to entry for retail investors at all socioeconomic levels, and therefore has allowed many more individuals to profit from this investment. Full details on how purchasing Bitcoin at these ATMs works are available on Cash2Bitcoin’s site.

As highlighted in the map below, Cash2Bitcoin provides ATMs across the United States and continues to expand its footprint. Its ATMs are located everywhere from small-town gas stations to corner markets in cities such as Dallas, Jacksonville, Detroit, and Indianapolis. The number of ATMs that Cash2Bitcoin installs each month has grown exponentially, mirroring the price increases of the currencies they provide and further bolstering Bitcoin’s value and demand. 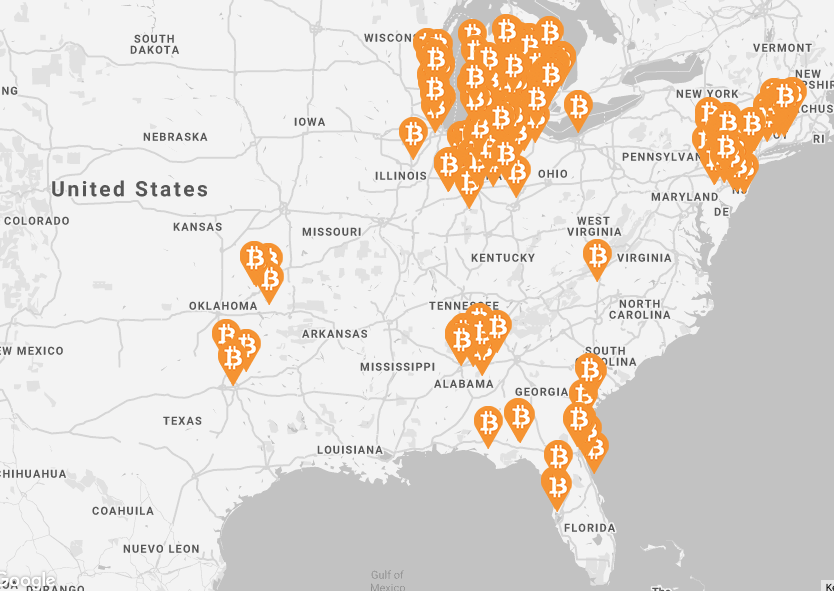 Figure 4: Number of transactions and unique customers per month performed at all Cash2Bitcoin ATMs 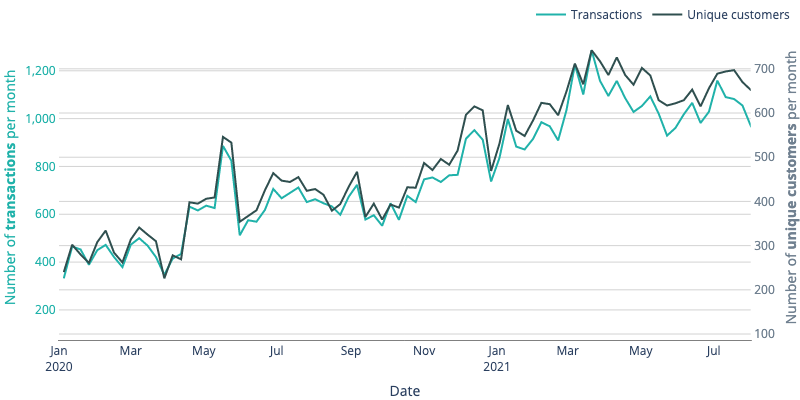 To meet this rising customer demand, Cash2Bitcoin quickly expanded its operation. On January 1, 2020, Cash2Bitcoin operated under 100 Bitcoin ATMs. This number will have ballooned to over 470 by the time this paper is published. This rapid expansion has led to a relatively consistent average number of transactions per month per ATM; however, this ratio is likely to increase as internal analysis has shown that even successful ATMs often have slow starts in terms of attracting users after initial placement.

Due to the proprietary nature of the data, this paper cannot delve into the specific figures relating to the average number of transactions per month per ATM. Irrespective of whether this ratio continues to rise, a stable number of average customers per month per machine suggests demand exists, at the very least, in untapped markets. This demand has risen, at least in part, because of a positive feedback loop. As the price of Bitcoin rises, it gains the attention of new investors, creating more demand and raising prices further. This type of loop is common for other assets and is commonly seen in the stock market. At times, the price of Bitcoin has decreased and demand has followed suit, but each time the price has returned to then surpassed the previous high. As long as this demand exists, Cash2Bitcoin will continue to expand into new markets. Figure 5 compares the price of Bitcoin with the number of transactions across all of Cash2Bitcoin’s ATMs. 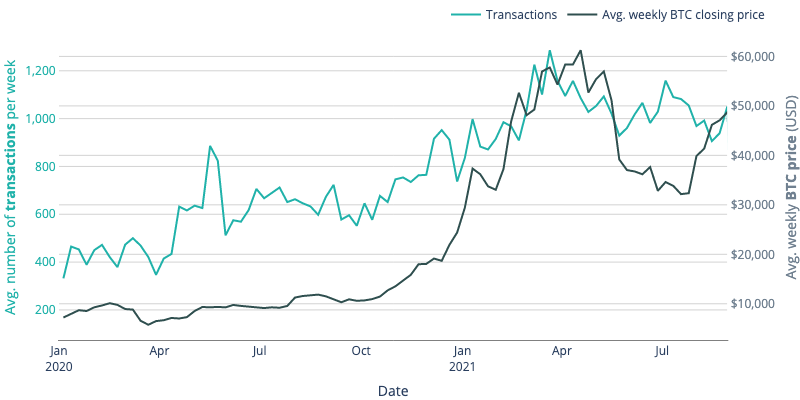 As highlighted earlier in Figure 2, many individuals who purchased Bitcoin throughout the pandemic earned profits averaging over 200%. Put in more tangible terms, the Table 1 provides examples of potential profits made if users purchased Bitcoin on January 1, 2020, and sold it now.

Note: “Present value” and “Potential profit” based on price of Bitcoin on Sept. 7, 2021

Such profits and the convenience of using physical locations significantly outweigh the nominal ATM fees Cash2Bitcoin charges customers. In essence, these are convenience fees for bringing Bitcoin purchases to the physical world.

Investing $5,000 or more in Bitcoin by purchasing it at ATMs is relatively common. Approximately 10% of individuals who obtained Bitcoin through Cash2Bitcoin’s machines purchased a total of $5,000 worth or more during the period under review. Even more importantly, 6% purchased a total of $10,000 or more during this time. People investing higher amounts may be drawn to ATMs because they purchase smaller amounts consistently over time, have a significant amount of cash on hand and prefer to quickly exchange it for a growing asset, or find the registration process for ATMs more convenient than the process for online exchanges.

Analysts attribute Bitcoin’s price increase to a wide variety of factors. Particularly during the pandemic, as inflation with many traditional currencies has crept in, investors have sought currencies and assets that cannot increase in supply, thereby dropping in value. Bitcoin, for instance, has a maximum supply of 21 million coins, just as the supply of gold is limited to what can be mined. Furthermore, many companies have begun holding Bitcoin on their balance sheets and/or accepting it as a form of payment, such as Tesla, Newegg, Microsoft, AMC Theatres, and Square. To keep up with this demand, some payment processors, such as Paypal, have announced or already enacted plans to facilitate payments between customers and vendors using Bitcoin.

With interest in Bitcoin showing few signs of slowing, many expect the price to continue increasing and passing its previous record of $63,000 because of its uptake by large companies, increased use cases, and the positive feedback loop mentioned above. To keep up with demand, both for the currency itself and ways of acquiring it, Cash2Bitcoin will continue to install ATMs across the country, ultimately making it easier for retail investors, such as yourself, to purchase it.