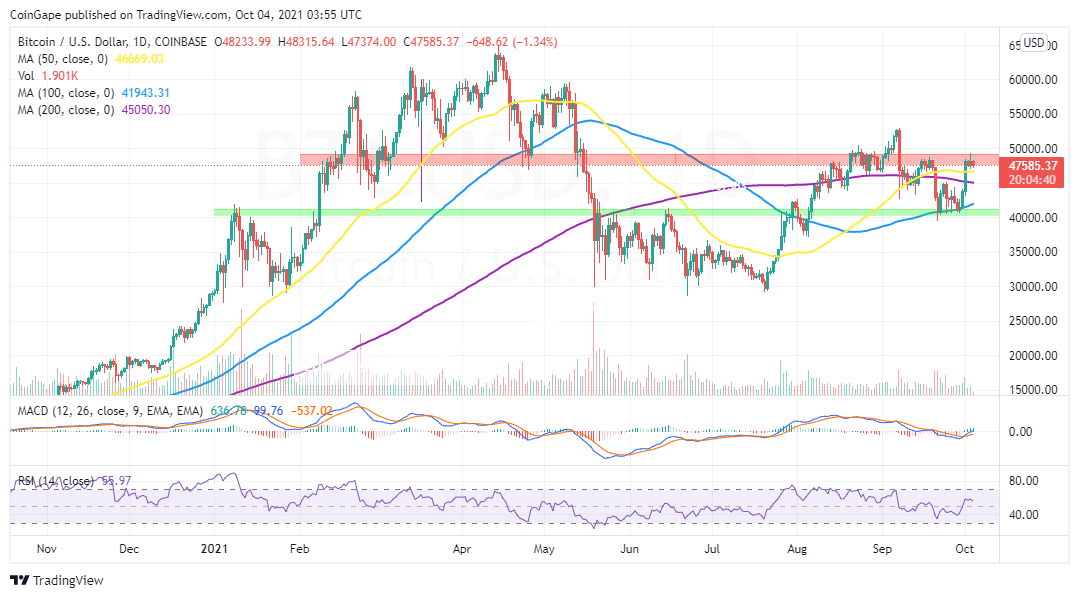 Bitcoin flipped green last Friday and added more than $5,000 to its value to trade roughly above $48,000. Before this, the bellwether cryptocurrency had for more than a week sought and defended support at $48,000.

The entire market gained traction alongside Bitcoin, with Ethereum breaking above $3,200 and closing the gap to $3,400. At the time of writing, Ethereum is trading at $3,352. Cardano, the third-largest cryptocurrency, holds marginally above $2.8 while Binance Coin trades at $415. The rest of the market is painted red due to the corrections that occurred during the weekend.

The largest cryptocurrency gained more ground as soon as it flipped $44,000 into support on Friday, a move that we had predicted and explored several times. The upswing to $48,000 was sharp and quick, with BTC growing in value by more than 10% in a few hours.

Nonetheless, Bitcoin lost steam marginally above $48,000, within the supply zone marked in red. This area houses many sellers who keep trying to break even, thus reducing the bull’s impact.

The resistance also explains the minor correction under $48,000, whereby BTC is teetering at $47,760. It is worth mentioning that buyers have substantial influence; hence, the retracement seems healthy and controlled.

BTC’s daily chart highlights immediate support provided by the 50 Simple Moving Average (SMA). As long this buyer concentration zone remains intact, we expect Bitcoin to keep up with the uptrend, aiming for $52,000 in the near term.

In addition to the crucial support, the Moving Average Convergence Divergence (MACD) has a bullish outlook based on the daily chart. This technical index sent a buy signal on September 30, for the first time since July.

The post Bitcoin Price Prediction: BTC Falters At $48,000 As Bulls Regroup For The Next Run-up To $52,000 appeared first on Coingape.