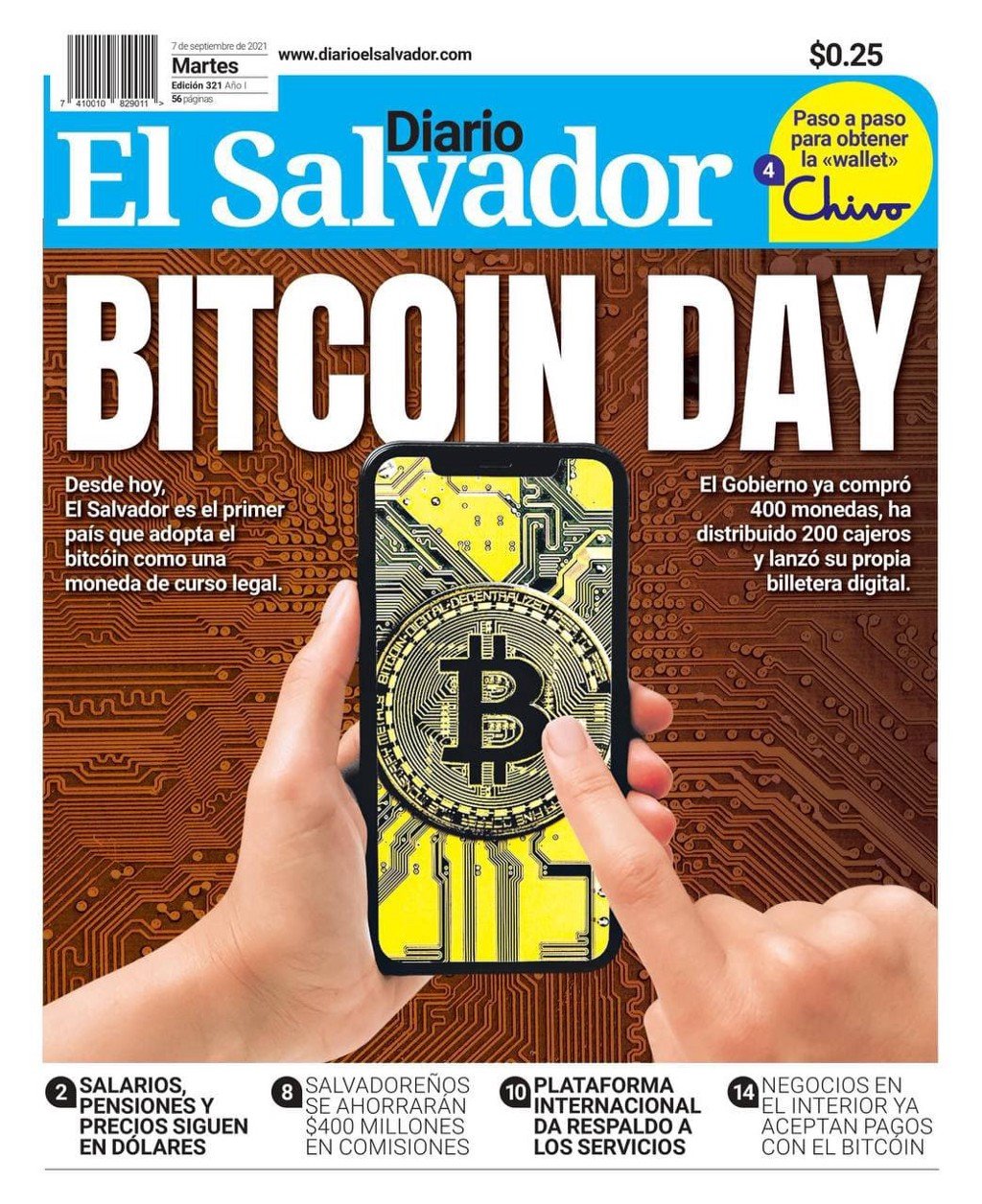 The historical day when Bitcoin became an official currency in El Salvador and official foreign currency for the rest of the world started with Bitcoin price correction. Correction is never a new thing for the crypto community. However, this time majority of crypto people took it as a personal offense and an orchestrated attack on Bitcoin.

Nayib Bukele, a president of El Salvador, said on his Twitter, “El Salvador just bought 200 new coins. We now hold 400 #Bitcoin,” referring to a discount on the market in his follow-up posts. On Tuesday (8th), they were already holding 550 Bitcoins.

The whole global crypto community was watching El Salvador on this historical day. On the 7th and during the following days, people were going to large chains like Starbucks, McDonald’s, and different local shops to pay with Bitcoin and post it on their social media. The Crypto community was filled with excitement, I could see it from my Twitter.

There were also some opposed movements before and after Bitcoin officially became a legal tender. Some people were claiming that they will be paying for this reform with their taxes. There were multiple protests happening in the country.

Volatility is a relative term

I always say that volatility is a relative term. Currency can’t be volatile if we don’t compare it to anything else. Imagine if all world prices, salaries, and settlements were in Bitcoin. Would it be volatile then? However, when it comes to the global market, purchasing goods from outside of the country, and conducting business in foreign currencies, the volatility of the national currency can cause a harmful effect on the businesses. Especially when it comes to small businesses and micro-merchants.

Dual currency system and what comes with it?

Until now, Bitcoin is not the only official currency in El Salvador, as the US dollar remains in place as well. Bitcoin helps the country to minimize dependency on the US dollar and to have enormous long-term benefits for the economy. However, having a dual currency system brings us back to the volatility discussion. If all merchants and businesses are doing settlements in US dollar, then accepting Bitcoin can come with the price depending on the day and the market conditions. If all settlements are being done in Bitcoin, then the businesses and micro-merchants would be less sensitive to the price fluctuations on the daily basis. Additionally, considering the deflationary nature of Bitcoin, they might also enjoy currency appreciation in the long term.

When we talk about innovative financial solutions in the developed world, it’s never the same as in developing countries. El Salvador, according to Findex 2017 data, had only 30% of adults with access to a formal account, making 70% of the population unbanked. Internet penetration forecast (Statista) is set at 49%, making half of the people without access to the Internet. It’s already a larger fraction of the population that can get access to financial services through the crypto market compared to people with access to formal financial products.

El Salvador also introduced a Chivo (slang for “cool”) app for Bitcoin payments that experienced some tech glitches when people tried to log in or pay at cafes/restaurants. Like any app launch, there were people who had a negative experience because of some tech issues and people being extremely excited to use the lightning network and pay with Bitcoin in seconds in Starbucks or local cafes.

Financial literacy, inclusion, and why people choose crypto over banking?

It’s important to understand that El Salvador is the country with one of the lowest income-per-capita in Latin America. The majority of people didn’t use formal financial products and remained unbanked. The financial literacy rate was marked at 21% in 2017 (World Bank) compared to developed economies that have 37% — 60% of financially literate people. For example, Argentina, where the crypto adoption rate is one of the highest in Latin America, had a 28% financial literacy rate.

I had been working with financial products for the underserved population in South East Asia during my time in the UN, and introducing something new without proper education and explanation always comes with lots of difficulties. At the same time, I always believed that cryptocurrencies are the cure for financial inclusion and underserved population. People in rural areas in Myanmar, for example, don’t have access to ATMs. All the machines are miles away. Imagine how difficult it is to get money from an ATM when you have to walk miles during the rainy and typhoon season through the mud. It’s not a daily experience, and therefore a major part of the formal economy turns into the Cash Economy. At the same time, I realized that each household has an access to at least one phone that is connected to the Internet. That makes it extremely easy to access the crypto market without the necessity to walk anywhere.

In my previous articles, I’ve been discussing Bitcoin and cryptocurrency use cases in Latin America within the Cash Economy and outside of the public sector. People choose Bitcoin over their national currencies for different reasons, including protection against inflation, getting access to financial services, remittances, loans, etc. Making Bitcoin a legal tender only brings it to the public sector and including all this unofficial economy official.

Going back to the case of El Salvador, in my opinion, it’s one of the most exciting experiments on the government level that can improve people’s lives and increase financial inclusion. The whole crypto community watching it with pure excitement. Nayib Bukele brought the unofficial economy to the public sector opening more opportunities for the unbanked and for the country’s economy in general.

Not all great ideas work in practice, and the major part of success is always execution. The launch day didn’t go as smoothly as everyone was expected, but when did we ever have a smooth launch day for something? El Salvador’s GDP is $27 Billion, let’s compare it to Apple and its $ 2.46 Trillion market cap. Apple’s new products are not always perfect, why do we expect Chivo to go as smooth?

At the end of the day, the most essential puzzles that El Salvador would need to sort out are:

1) Financial education and literacy. It’s crucial to explain to people what Bitcoin actually is and how it can help them with remittances, daily transactions, and getting access to financial products.

2) Settlements. I already mentioned that using a dual national currency system can come with a cost, not for the government and rich, but for the poor. Micro-merchants, small vendors, and individuals will be exposed to currency fluctuations and will bear the risk of the Bitcoin price going down when they need to do a settlement in the US dollar.

3) Framework for cryptocurrency payments, transfers, settlements, and accounting. It should be easy, accessible, and smoothly working.

The real history is being made today and it’s exciting for the whole crypto space. I will keep watching how the situation will be evolving and share more updates and insights later. Also planning to visit El Salvador personally in the upcoming months.

I’m crypto and blockchain enthusiasts and constantly work with startups and SMEs from this emerging field. I try to keep my “doors open” for exciting projects that are willing to grow and to scale. You can reach out to me on LinkedIn.

A Week After Bitcoin Became an Official Currency was originally published in The Capital on Medium, where people are continuing the conversation by highlighting and responding to this story.