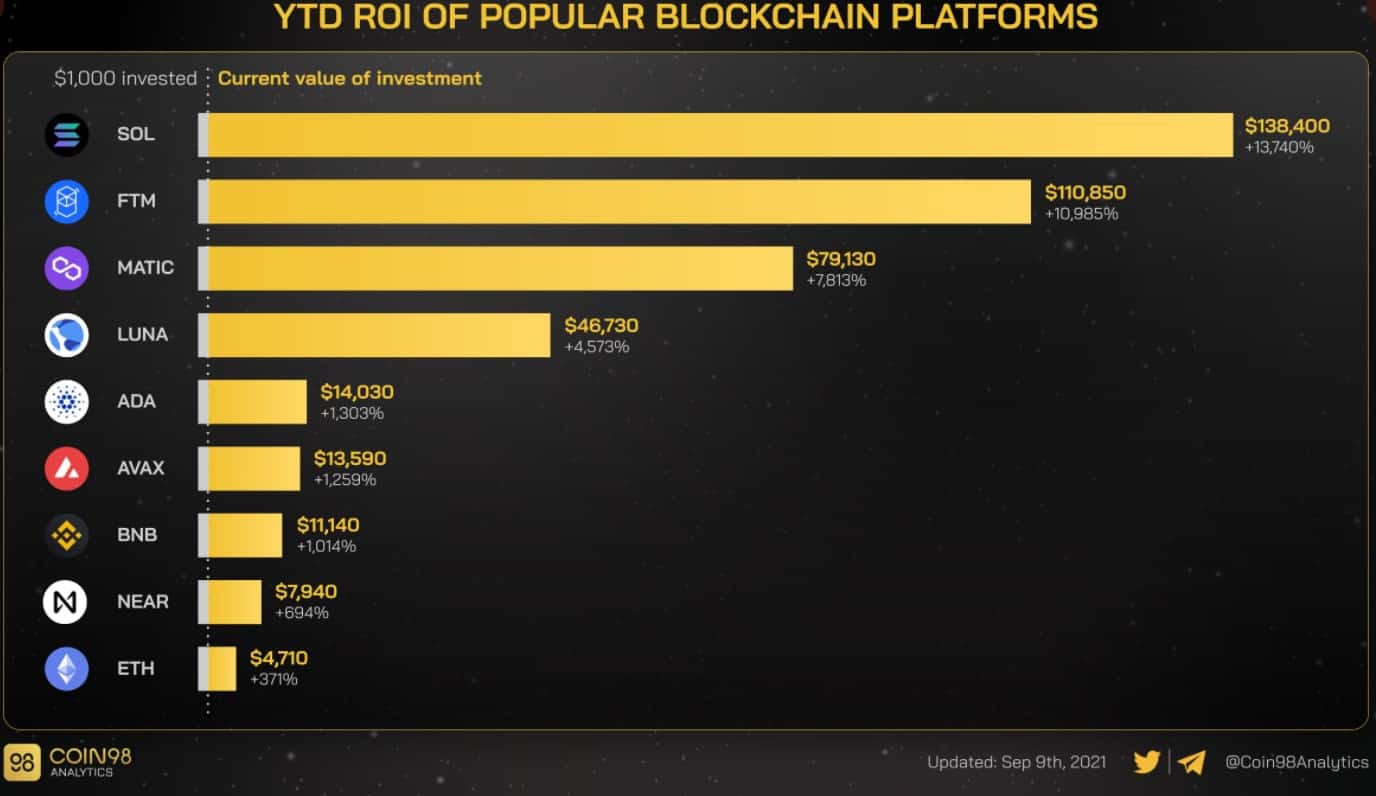 Playing “what if” is a dangerous game, especially when it comes down to investing. Sometimes, however, it could be rather intriguing to review what could have happened if investors made a particular investment. The highly volatile cryptocurrency market could produce some impressive scenarios. For example, putting $1,000 in Solana on January 1st, 2021, would have resulted in nearly $140,000 today.

The Cryptocurrency Landscape Change in a Year

It’s safe to say that the past year or so has been wildly bullish for the cryptocurrency industry. A brief look at the landscape in September last year shows that the entire market capitalization was roughly $300 billion. Today, it’s in excess of $2 trillion even after the recent market crash that wiped out billions – in fact, it evaporated in just a few hours more than what the capitalization was one year ago.

Bitcoin, the largest digital asset, has seen its value skyrocket to new highs as adoption comes from various sides. Earlier this year, it surpassed $60,000 per coin, and its own market capitalization was well above $1 trillion.

While BTC has indeed led the charge in terms of gains, some other – less known altcoins (until recently, at least) – have significantly outperformed their leader. Looking on a year-to-date scale, some alts have charted mind-blowing returns.

Such is the case with tokens like Solana (SOL), Fantom (FTM), Polygon (MATIC), Terra (Luna), Cardano (ADA), and many more. Consequently, it’s worth reviewing what a potential investment in any of these coins could be worth today – a little over nine months later.

“What If” in Crypto

Ethereum entered this year at just over $700. Being the home of many DeFi and NFT projects, as well as numerous stablecoins, increased the appetite for its native cryptocurrency. Let’s not forget the upcoming transition to ETH 2.0. As a result, ether’s price skyrocketed to above $4,400 for a new ATH just five months after the start of the year.

Two of the tokens listed would have had an ROI of more than 100x – FTM and SOL. The infographic shows that Solana, which has taken full advantage of the NFT craze, would have returned nearly $140,000 for the lucky investors that put $1,000 in the token on January 1st.