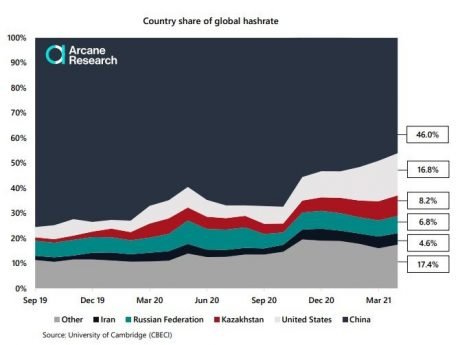 Shocker! According to the latest CBECI update, China’s control over Bitcoin mining was already waning. The Cambridge Bitcoin Electricity Consumption Index shows that and much more, it “provides an up-to-date estimate of the Bitcoin network’s daily electricity load.” However, China is the headline. The government’s recent ban on Bitcoin mining left the world speechless, and this feels like another piece to solve that puzzle.

It doesn’t quite fit, though. According to Arcane Research, CBECI numbers say that:

China’s share of total Bitcoin mining power has declined from 75.5% in September 2019 to 46% in April 2021 — before the restrictions on Chinese miners were even imposed. That figure is much lower than the older estimate of 65%.

That’s a sharp decline. Why did China’s miners lose so much ground before the ban? Did the Chinese government turn off the machines that they reportedly own? Why would they do that? Is everyone missing an obvious explanation for all of this? It’s also very interesting that the CBECI shows that the United States and Kazakhstan were growing at a tremendous rate before the ban. 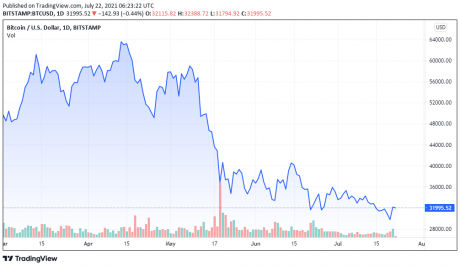 Bitcoin Mining In The United States And Kazakhstan

Over the same period, the United States’ share of total Bitcoin hashrate increased from 4.1% to 16.8%, making it the second-largest Bitcoin mining location.

That ‘s curious. After the government ban came into effect and the miners turned off their machines, we worried about the Bitcoin hash rate going into a death spiral. The great miner’s migration was on its way, and guess who were the forecasted big winners:

Tons and tons of mining equipment are currently traveling to their new homes. There are reports of a huge operation in Kazhakstan, a neighboring nation of China. There are also rumors of equipment and personnel already settling down in Texas. The US state is making a push to become a Bitcoin mining capital, and apparently, the efforts already bore fruit.

Remember, though, everything the CBECI numbers show happened before the ban.

Is there something we’re missing?

How Do They Get The CBECI Numbers?

The Cambridge Bitcoin Electricity Consumption Index explains the methodology they use:

The underlying techno-economic model is based on a bottom-up approach initially developed by Marc Bevand  in 2017 that uses the profitability threshold of different types of mining equipment as the starting point.

So, it’s a very elaborate educated guess. However, it’s based on real data and a range of estimations. Does it tell us anything about the curious results they got? Is the data telling a story that we’re missing?

Last month, we posed a theory about the Chinese government trying to get rid of small hydroelectric plants. The whole situation is perplexing, so, we asked the following questions:

It’s possible that the government is trying to get rid of those plants. That would explain the article’s tone, it seems like it was trying to get investors to stay away from those hydropower stations. In light of this, China’s ban on Bitcoin mining could just be part of an even bigger play. They’re serious and methodically shaking things up over there.

What could be their end-game? Is China just trying to go carbon neutral and repair the original flow of the rivers? Or is there something else at play here?

Everything the CBECI shows seems to relate to the answer to all of these questions. However, there’s at least one piece missing. The mystery persists.