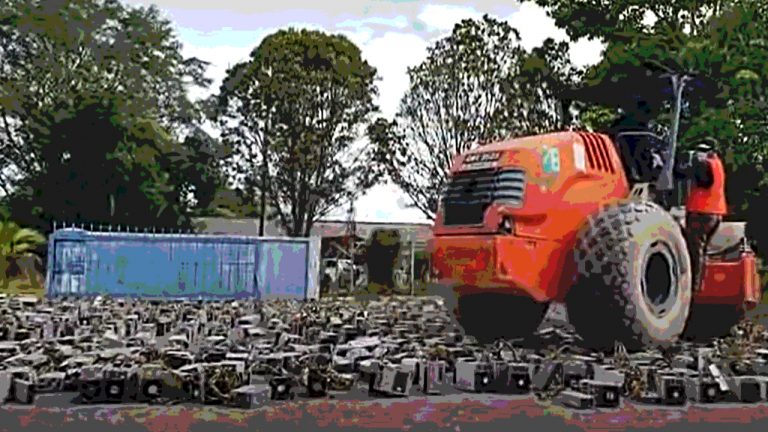 Over 1,000 bitcoin mining machines have been totally destroyed in Malaysia after they were seized for illegally mining the cryptocurrency using stolen electricity. The mining machines, worth about $1.26 million, were steamrolled in the Malaysian city of Miri and eight people have been arrested so far.

Over a Thousand Bitcoin Mining Machines Demolished in Malaysia

The mining machines were seized in a joint operation carried out by police and Sarawak Energy Berhad (SEB) in Miri, a Malaysian city on the northwest coast of the island of Borneo. They are estimated to be worth 5.3 million Malaysian ringgits ($1.26 million). All seizures that had been settled in court were disposed of at the Miri district police headquarters Friday.

A total of six people have been successfully charged under Section 379 of the Penal Code for electricity theft and have been fined up to RM8,000 and jailed for up to eight months.

The authorities said that the mining machines used electricity stolen from SEB’s electricity supply lines to mine bitcoin.

According to the police chief, SEB suffered a loss of 8.4 million Malaysian ringgits due to electricity theft from the bitcoin mining activities. He further detailed:

The electricity theft for mining bitcoin activities has caused frequent power outages and in 2021, three houses were razed due to illegal electricity supply connections.

What do you think about Malaysian authorities destroying bitcoin mining machines with a steamroller? Let us know in the comments section below.