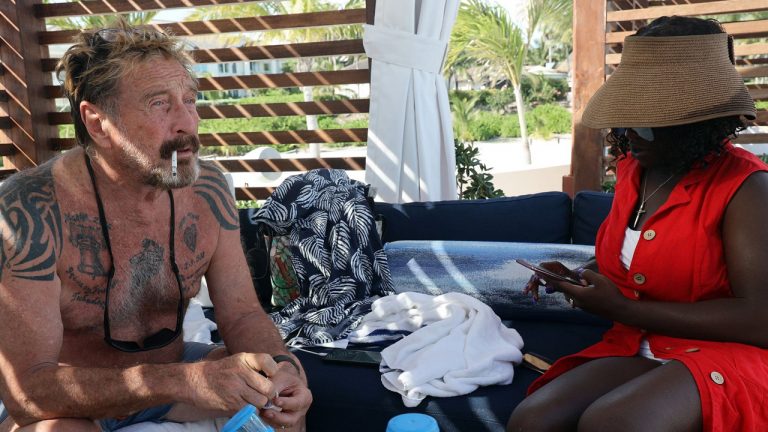 Just before the antivirus tycoon John McAfee was found dead in Spain, he told the public from prison that U.S. federal authorities seized all of his assets and he had “nothing.” Now a biographer who is writing a McAfee-based biography has corroborated McAfee’s story. The author Mark Eglinton says that McAfee was also unable to pay for the requested biography.

In 1987, John McAfee wrote the first commercial-grade antivirus software and by 1994 he sold his stake in the company and resigned. By 2007, reports show that McAfee’s net wealth peaked at $100 million but allegedly his funds quickly evaporated in the 2008 financial crisis.

McAfee started close to ten companies after leaving the antivirus software firm and he resided in Belize for a number of years. In 2013, McAfee came back to the U.S. when it was discovered he was being questioned for murder by the authorities in Belize.

Speaking with the publication the dailymail.co.uk, Mark Eglinton, an author who was working on McAfee’s biography said the former antivirus tycoon was broke. The author’s book is called “No Domain: The John McAfee Tapes” and it contains a large quantity of interviews with McAfee.

I built this house in 1993, for a cost, including land and outbuildings, of over $37 million. I sold it in 2005 for less than $5 million. The man who bought it could not afford the $3 million per year to maintain it and went bankrupt. 50+ bedrooms. 75 bathrooms. WTF? #Getreal pic.twitter.com/eLlzgI1djv

Eglinton explained to Dailymail this week that toward the end, McAfee wasn’t able to pay for the requested biography’s expenses. “I don’t doubt that if he could have helped he would have,” Eglinton insisted. McAfee told him at the time:

I can’t do it, my financial situation is worse than yours.

Reports have noted on countless occasions that McAfee lost his fortune during the financial crisis in 2008 but Eglinton rebuffed this theory. “We got a lot into where he spent his money over the years,” Eglinton said during his interview. “He had his money in very safe investments, but he built houses, absolutely bizarre properties. Some of them, he never slept a night in the property,” the biographer added. Because of the Great Recession, some of McAfee’s properties were sold at significant losses.

For instance, the report notes that McAfee once owned a Woodland Park, Colorado compound, which was once valued at $25 million when he purchased the property. The property was later auctioned in 2007 to a commodities trader for $5.72 million. The Dailymail reporter Keith Griffith asked Eglinton about McAfee’s last tweet from prison when he told people the U.S. seized all of his wealth.

“The U.S. believes I have hidden crypto,” McAfee tweeted before he passed. “I wish I did but it has dissolved through the many hands of Team McAfee (your belief is not required), and my remaining assets are all seized. My friends evaporated through fear of association. I have nothing. Yet, I regret nothing.”

Eglinton told Griffith that McAfee liked to brag about being wealthy rather than admitting he was broke. Before McAfee’s final tweet and his issues with U.S. law enforcement, one could assume McAfee still had lots of money at his disposal.

“Rather than pretend he didn’t have it, I think he was pretending he did,” Eglinton said. The biographer further noted that the book will showcase a side of McAfee people haven’t really seen. “What will surprise people about this book is the deep philosophy of John McAfee,” Eglinton’s interview concluded.