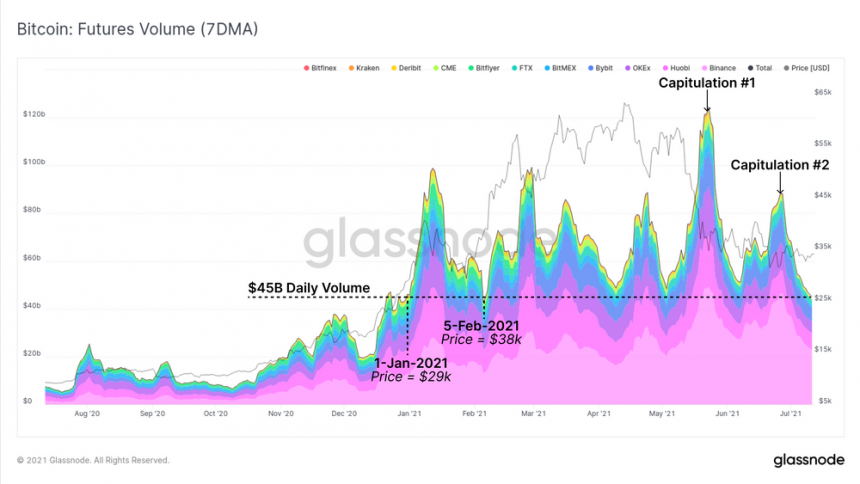 Bitcoin could retest the lows of its current range as its price trends to the downside. At the time of writing, BTC’s trades at $32,277 with a 2.3% loss in the daily chart. Investors and traders wonder if these levels will hold as bulls seem to lack conviction in lower timeframes.

Trader Josh Rager highlighted that Bitcoin has been moving sideways lately. The cryptocurrency has experienced less volatility than previous months with continual compression, at least, in the daily and weekly charts.

Rager set $36,000 as a critical price mark for the market to regain confidence. At the same time, other traders expect $31,000 to be a critical area of support that could prevent further downside.

Analyst Allen Au has noted a pattern in Bitcoin’s bull phases for 2013, 2017, and the current price action. The analyst believes that after a 60-day period, BTC’s price volatility has reduced from V1 to V2, as seen in the chart below.

Au expects this phenomenon has repeated in this bull phase. Thus, as in the past, the analyst expects BTC’s price to increase. In 2013 and 2017, this upwards movement led Bitcoin to its previous highs and marked the end of those years’ bull cycles.

Second time getting a 4h Supertrend rejection. With volume this low and lower volatility it tends to favor more downside. Higher volume and volatility favors upside.

Bitcoin, Calm Before The Storm?

Many experts believe Bitcoin is setting the stage for a big move either up to previous highs or down below its yearly open. Analyst Checkmate from Glassnode Insights has recorded an increase in activity in the spot and derivatives market and on-chain metrics.

Combined with a change in the number of BTC deposited into exchange platforms, the first cryptocurrency by market cap might come out of its current range. In May, exchanges saw a rise in their BTC reserves, as selling pressure increase.

According to Glassnode’s Net Transfer Volume from Exchanges for the past two weeks, this trend could be reversing. During this period, there have been more “positive” exchange outflows with around 2,000 BTC leaving these platforms every day.

Since the sell-off in May, futures open interest has remained bound between $10.7B and $13.0B with only a handful of notable builds or declines within that range. Open interest remains 57% below the ATH set in April as Coinbase went public.

In addition, volume in the derivates sector has been on a decline. Thus, Bitcoin could have more room to recover, as there is less leverage at play to impact the market. Experts are yet divided on future price actions, but they agreed that a big move is forming.