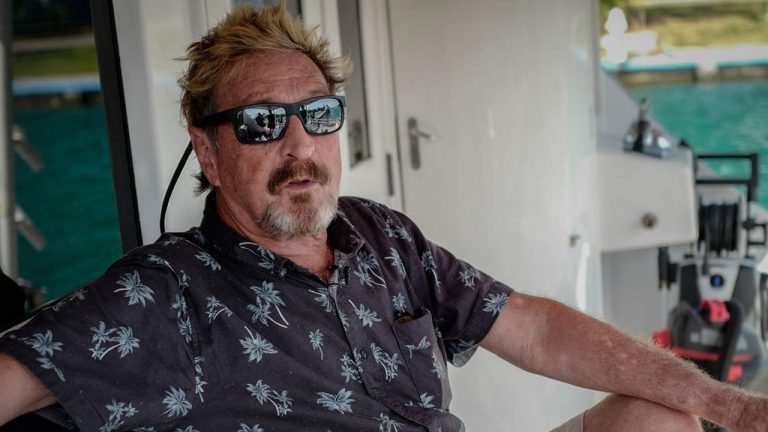 At age 75, the former antivirus tycoon and cryptocurrency advocate, John McAfee, passed away by reported suicide. McAfee was a wild and charismatic man but prior to his death, he was facing tax-related charges and extradition to the United States. For the last few days, the internet has seen myriad theories and assessments of McAfee’s wild rollercoaster of life and death.

Three days ago, Bitcoin.com News reported on the death of John McAfee after the Catalan justice department in Spain announced his alleged suicide. Prior to McAfee’s reported death, the Spanish high court ruled in favor of the U.S. government’s attempt to extradite him. Spanish officials told the newspaper, El Pais, that “everything pointed to suicide.”

However, when the news went viral on the web, many said they believe McAfee would never take his own life, and speculation about a ‘dead man’s switch’ conspiracy began to circulate. Basically, a dead man’s switch is a switch that is activated when the human operator is either dead or incapacitated in some way.

One theory spreading around various circles is that McAfee had evidence against the U.S. government and a number of global bureaucrats. On October 15, 2020, from a Barcelona jail, McAfee tweeted: “I am content in here. I have friends. The food is good. All is well. Know that if I hang myself, a la Epstein, it will be no fault of mine.”

McAfee’s Epstein reference refers to the convicted sex offender Jeffrey Epstein who ostensibly took his own life in a New York jail cell. McAfee’s cryptic statements have been the primers for most of the wild speculation surrounding his death. An hour after the news of McAfee’s death spread across the internet, McAfee’s official Instagram posted an image of a bold letter “Q.”

Still, McAfee had said in the past that the Instagram account was not run by him, and he claimed the person running the account was a “troll who trolled me for years.” The “Q” Instagram post still made people think about the group Qanon, an organization that believes the world is run by a “deep state.” The post has since been deleted on Instagram, but several Qanon members said that the image contained metadata that leads to “31+ terabytes of incriminating data” against the U.S. government, the CIA, and two Bahamian officials. However, others claim the “Q” picture merely held standard Facebook metadata. 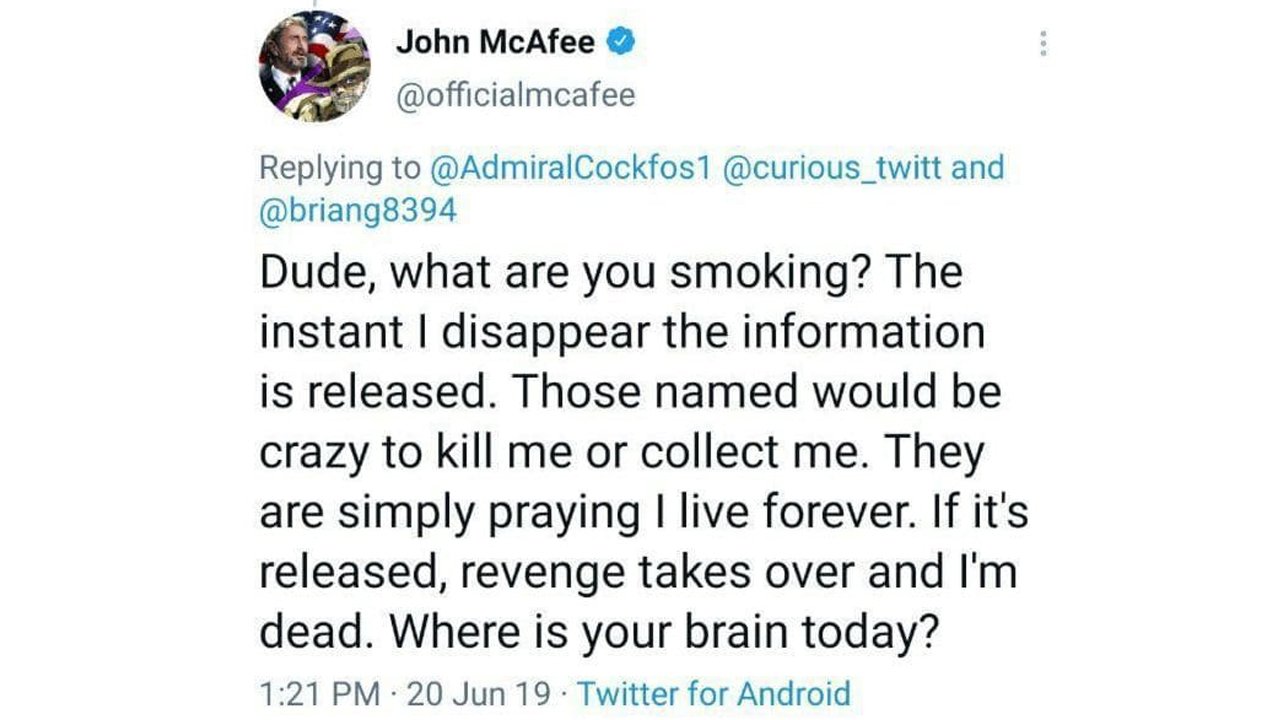 People have also been discussing an Ethereum-based token that was associated with McAfee at one time. For instance, people said Instagram’s metadata led them to an Ethereum smart contract called “Epstein,” which shows an ERC20 token called “whackd (WHACKD).” Because the Epstein smart contract and whackd tokens have been seeing some onchain movement, people believe these coins are directly connected to McAfee. There’s a number of 4chan posts claiming that the “Q” Instagram post and the whackd ERC20s are connected.

The Whackd Tattoo and Alleged 31 Terabytes of Incriminating Data

The theory also discusses McAfee’s prior statements and his arm tattoo that says “whackd.” McAfee explained at one time that he knew the government was coming for him.

“Getting subtle messages from U.S. officials saying, in effect: ‘We’re coming for you McAfee! We’re going to kill yourself.’ I got a tattoo today just in case. If I suicide myself, I didn’t. I was whackd. Check my right arm. $WHACKD available only on McAfeedex.com,” McAfee explained in November 2019. In the summer, months before he got the tattoo, he also said:

I’ve collected files on corruption in governments. For the first time, I’m naming names and specifics. I’ll begin with a corrupt CIA agent and two Bahamian officials. Coming today. If I’m arrested or disappear, 31+ terabytes of incriminating data will be released to the press. 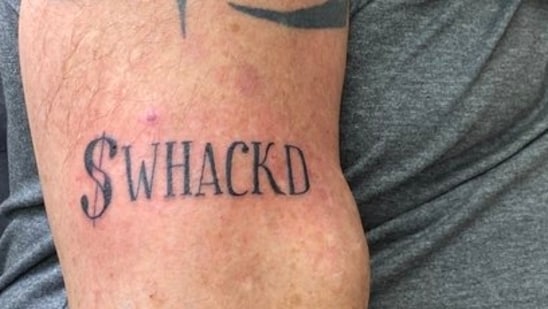 A week after that tweet, McAfee wrote: “The instant I disappear the information is released. Those named would be crazy to kill me or collect me. They are simply praying I live forever. If it’s released, revenge takes over and I’m dead.”

Adding to the speculation, a former 8kun administrator associated with Q Anon told Newsweek this week that McAfee may be leveraging a dead man’s switch.

“Regarding John McAfee: He was in jail. He has a dead man switch. He ‘died’. His dead man switch has not (yet) activated,” the former 8kun administrator said on Telegram. “We will know soon if he is really dead, or managed to escape from prison under the guise of a ‘suicide’ [i.e. Epstein.]”

Most of the theories and evidence behind the dead man’s switch theory stem from mere speculation, the controversial Q Anon group, and very little evidence at all. The reasons being, the Instagram post has been contested because McAfee said he didn’t operate the account in the past. And as mentioned above, metadata from the Instagram post is standard Facebook photograph metadata.

Further, the ERC20 tokens could be moved by anyone who owns the tokens, and these coins show no direct connection to John McAfee or “31+ terabytes” of so-called hidden data. For now, the story is wildly speculative and considered a conspiracy theory that doesn’t hold much water.

John McAfee’s wife Janice and John’s close associates, however, believe he was not suicidal. Speaking with the press on Friday, Janice McAfee’s lawyer, Javier Villalba said the official autopsy was taking place and the family wants an independent second autopsy done as well.

“I blame the U.S. authorities for this tragedy. Because of these politically motivated charges against him. My husband is now dead,” Janice told the press at a conference. “His last words to me were: I love you and I will call you in the evening” Janice said. “He would have never quit this way, he would never take his life in this way, ever. Those words are not words of somebody who is suicidal,” she added.

Janice McAfee wants a “thorough” investigation and she highlighted during her statements that American politics would not allow John to be a free man in the United States.

“Even though he was born in England, America was his home,” Janice said. “He came there when he was a child. He had his first girlfriend there, his first case, you know, his first job. He made his first millions there and he wanted to be there. But, you know, politics just wouldn’t allow for that to happen.”