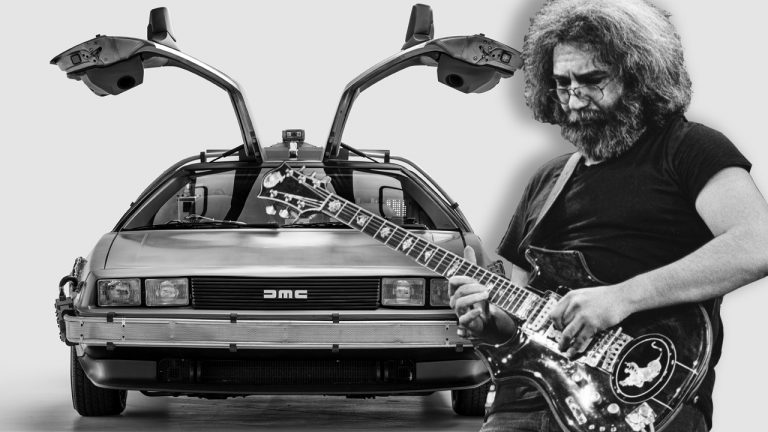 Over the last seven days, there have been close to 18,000 non-fungible token (NFT) primary sales worth over $12.7 million. This week also saw a great number of non-fungible token (NFT) announcements surrounding big names like DeLorean Motor Company, the renowned NFT artist Beeple, the Grateful Dead’s Jerry Garcia, USA Today and more, as the NFT ecosystem continues to swell.

The we.new platform is “a curator and provisioner of iconic moments as non-fungible tokens (NFTs),” according to the announcement. Beeple’s we.new project has partnered with well known companies like Wasserman, Endeavor, Universal Music Group, and Warner Music Group. 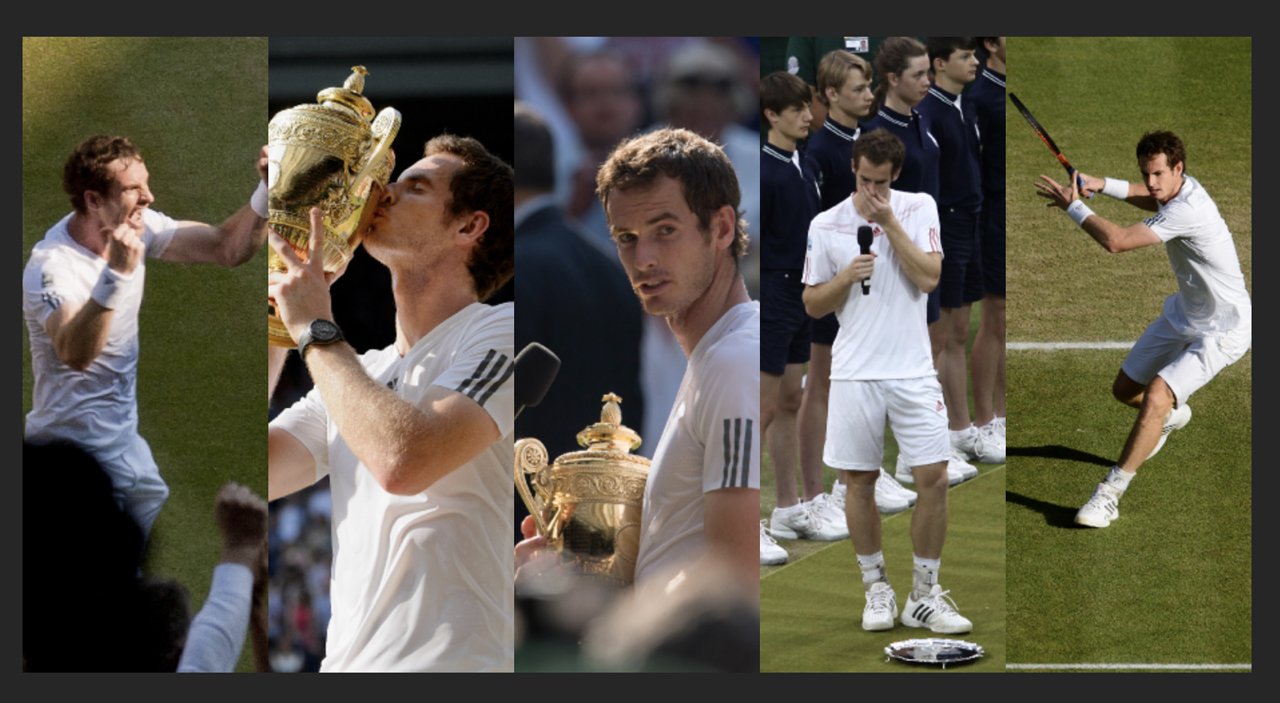 By working with Endeavor’s IMG, the web portal’s first release celebrates Andy Murray’s historic victory at Wimbledon in 2013. “NFTs represent a new paradigm, not just in how people can invest their money but in how we conceive of our shared experience and how we celebrate remarkable achievements,” Beeple said in a statement.

According to an announcement from DeLorean Motor Company (DMC), the firm’s iconic DeLorean DMC-12 will be turned into a series of 40 unique DeLorean 1-of-1 NFTs created by the acclaimed street artist Madsteez.

The DMC announcement details that the collection offers a “year-by-year history of the car, highlighting notable years with accompanying one-of-a-kind physical items.” 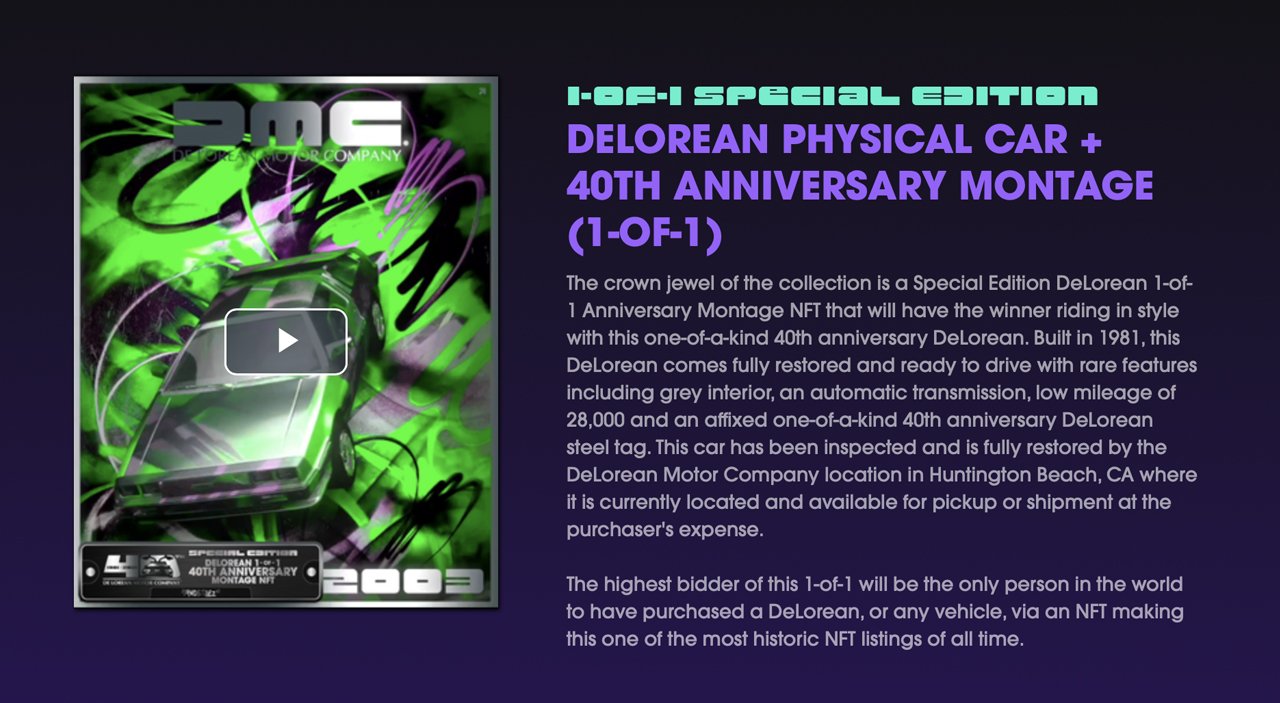 The classic DeLorean DMC-12 has its own fan clubs all around the world, and the car is well known for being featured in the film series “Back to the Future.” The website delorean40nft.com showcases the entire collection and the series comes with two special edition items.

“The crown jewel of the collection is a Special Edition DeLorean 1-of-1 Anniversary Montage NFT that comes with a fully restored original DeLorean,” the announcement reveals. Moreover, the Special Edition 1981 DeLorean NFT adds the owner’s name to the top spot on the waitlist for the all-new DMC vehicle launching soon.

The well known artist Sam Cox, more commonly referred to as Mr Doodle, is launching a series of NFTs via the marketplace Nifty Gateway. The series is called “ESC” and it will be the first of a five-part NFT collection with “CTRL,” “ALT,” “DELETE,” and “SHIFT” to be released at a later date.

Mr Doodle is taking the art to a new format as he traditionally focuses on live hand-drawn pieces on canvas, large-scale installations, and fashion collaborations and shares them with his 2.7 million followers on Instagram. Mr Doodle’s 2019 Spring canvas sold for close to $1 million at the Tokyo Chuo Auction back in 2020. 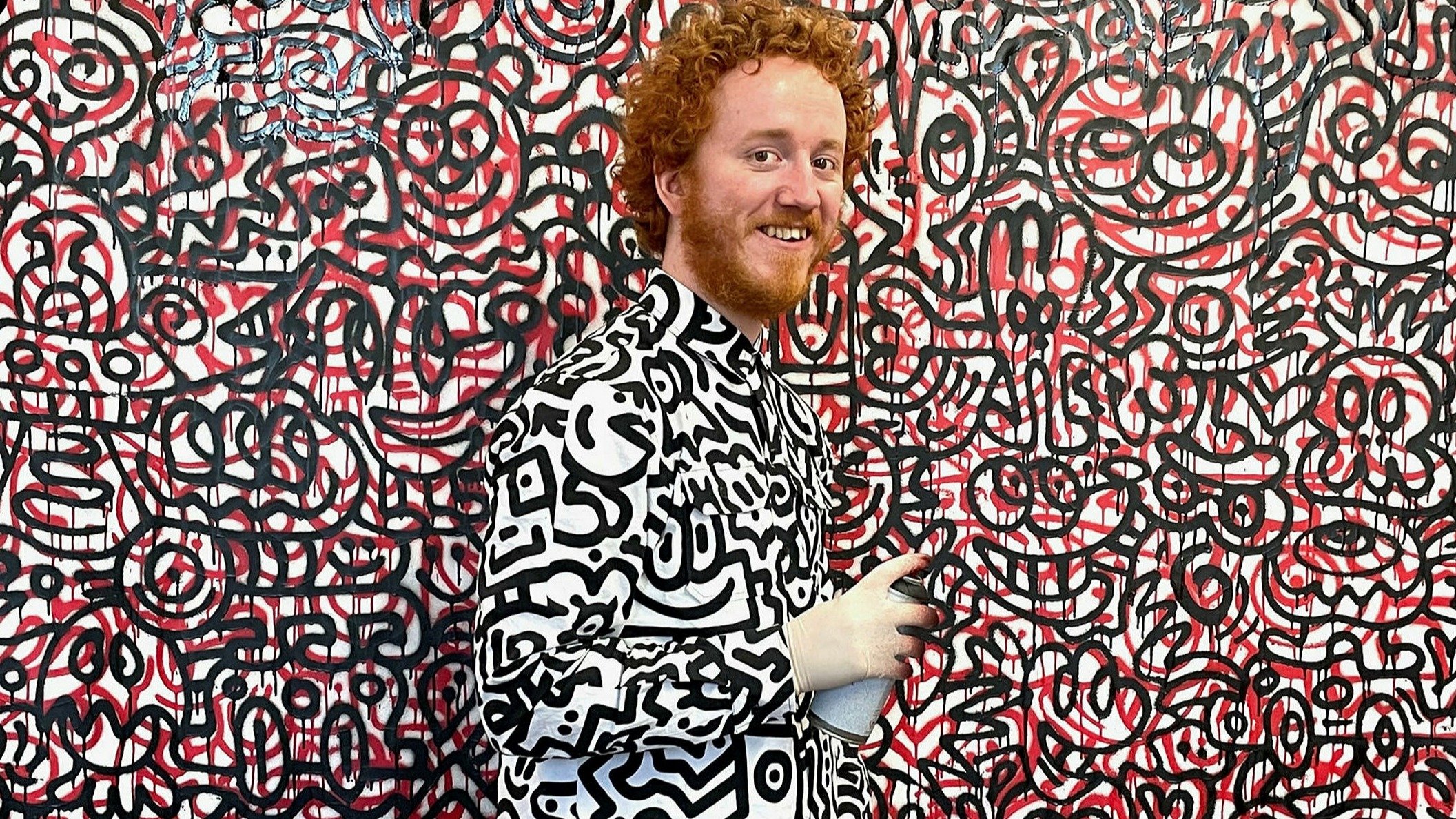 The ESC NFT will be released as an open edition and available for purchase during a 12-minute window. The announcement details Mr Doodle’s first NFT auction will start at 10 a.m. (EST) on July 1.

“Layers and dense imagery are some things that inspire me recently,” Mr Doodle said in a statement. “I chose the title ESC from the keyboard as I feel the digital world can be an escape from the real world. I love seeing how doodle characters overlay each other, creating completely new scenery. Each layer can live individually, but if you put them all together you get this fulfilling sense of completeness.”

This week Jerry Garcia Music Arts (JGMA) label revealed the release of the rock legend’s first-ever music art NFT. Bitcoin.com News recently reported on the last Garcia non-fungible token art collectible called the “Gift,” which was sold by JGMA with a portion of the proceeds given to the Jerry Garcia Foundation (JGF). Garcia’s next music art NFT will be issued via the ecological NFT platform Aerial and auctioned on the marketplace superrare.com. According to the announcement, the title of the one-of a-kind piece will be announced upon its release. 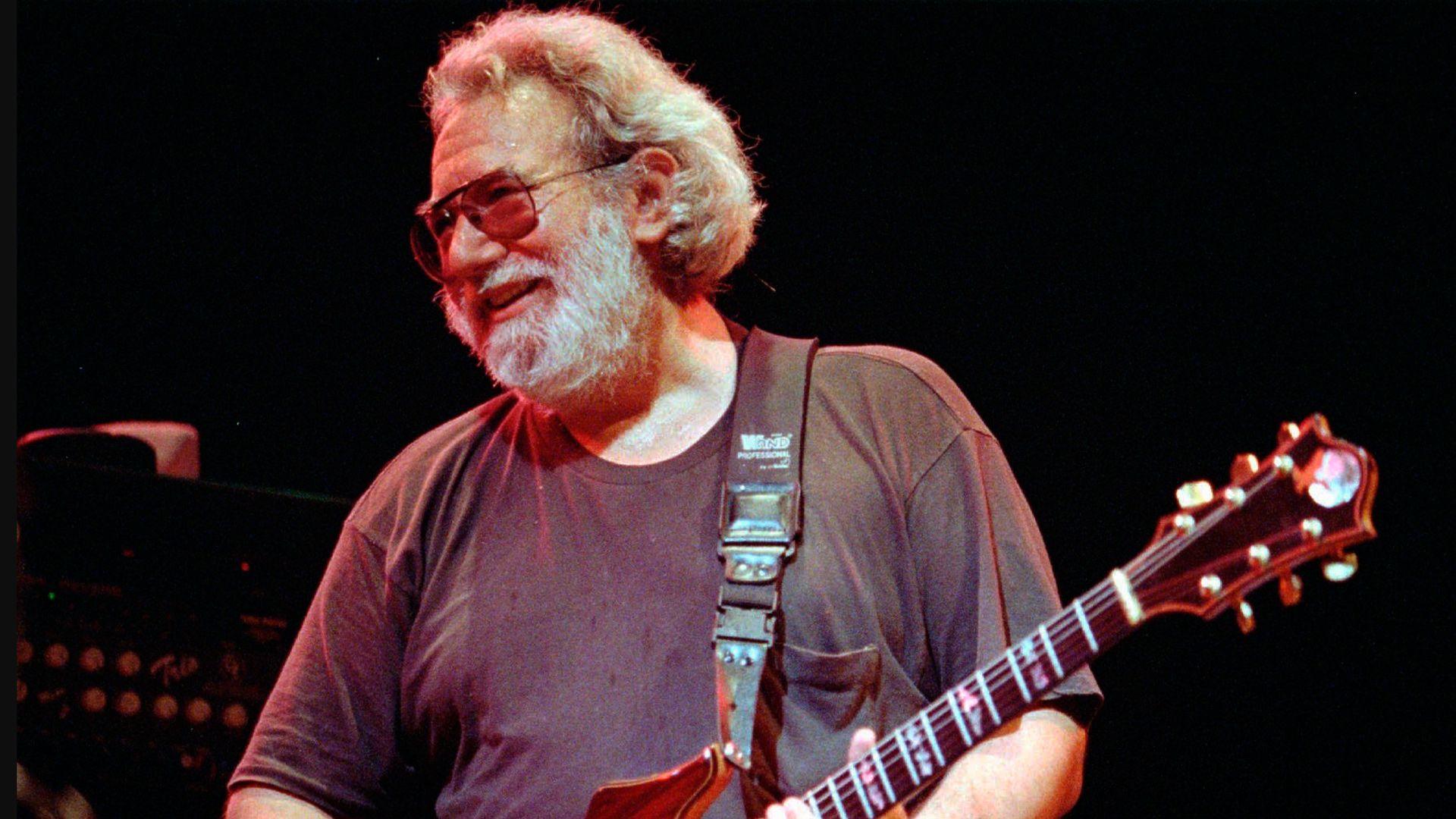 Similar to the last auction, a portion of the upcoming NFT auction proceeds will go to the JGF and the funds will be allocated to help support Jorma Kaukonen’s Psylodelic Gallery located in Pomeroy, Ohio. Furthermore, funds will also help JGF’s ocean preservation fund. Garcia loved visiting Hawaii frequently and the ocean preservation fund is dedicated to his spirit.

“I tend to think my dad would love the concept of NFTs,” Jerry Garcia’s youngest daughter Keelin said in a statement. “This feels like a new, revolutionary space where artists and collectors can interact in a more meaningful way, and NFTs are so unique and unlike anything we have ever seen. I like to imagine the ethos of this movement would resonate with my dad’s philosophical views.”

The Largest US Newspaper Publisher Gannett Launches Its First NFT

The internationally distributed American media network USA Today, the flagship publication of its owner, Gannett (NYSE: GCI), has announced its inaugural non-fungible token (NFT) on June 22. The non-fungible token was inspired by the first newspaper delivered to space in 1971.

The NFT will be a mosaic that features approximately 300 images from space travel over the last 50 years. All the proceeds from the Gannett NFT auction will go to The Gannett Foundation and the Air Force Space & Missile Museum Foundation. The company chose to leverage Origin’s NFT Launchpad and USA Today launched its own NFT web portal, nft.usatoday.com, as well.

“Space travel was an inspired theme for our first NFT because it tells the story of innovation and advancement that has been a positive unifying force in American culture, which is also the aim of Gannett’s storytelling,” Kris Barton, chief product officer at Gannett detailed. “Our digital subscriber growth can be attributed to our unique content and our ability to use technology – like an NFT – as we find meaningful ways to bring communities together and engage new audiences.”

In addition to Gannett, Garcia, DMC, Mr Doodle, and Beeple’s new market, Bitcoin.com News reported on Binance launching an NFT market with art from Dali, Warhol, and more. Rarible announced its NFT marketplace raised over $14 million this week and the Chinese payment giant Alipay launched an NFT market this week as well.

There are now close to two dozen NFT marketplaces and some of them are capturing million-dollar sales frequently. NFTs have seen a downturn in sales, but many are still selling with Art Blocks, Cryptopunks, and Sorare selling more than $2 million each over the last week, data from nonfungible.com shows. Further, a project called Wicked Craniums saw $4 million in NFTs sold in two days this week.