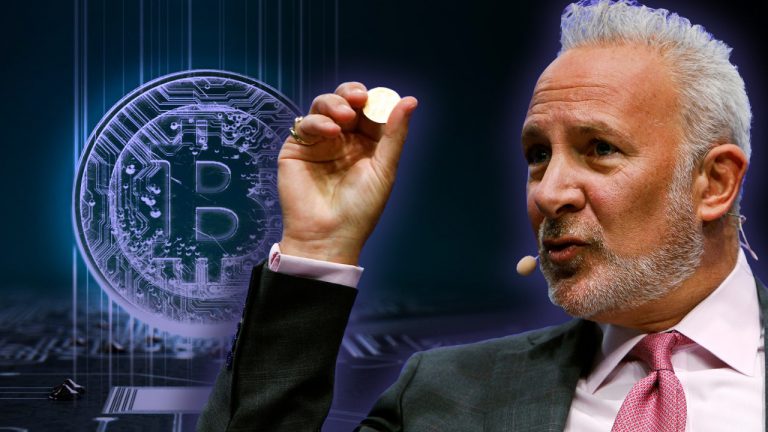 The American economist, financial commentator, and gold bug Peter Schiff had a lot to say about bitcoin’s price sliding on Tuesday. Schiff has always claimed bitcoin’s value will one day drop to nothing. This week he insists bitcoin’s chart shows a head and shoulders top pattern with a “neckline around $30K the pattern measures a move to zero.”

After bitcoin (BTC) dropped 10% Monday during the overnight and into the morning sessions on Tuesday, Peter Schiff took to his soapbox on Twitter and hammered the leading crypto asset. Schiff often has nothing good to say about bitcoin but on Tuesday, a great majority of his tweets (close to ten in total) were dedicated to bitcoin. The financial commentator talked about his favorite investment, gold, as well, and discussed how the precious metal dipped 6% last week.

“Over the weekend bitcoin bugs made fun of gold’s 6% drop last week, which was about twice bitcoin’s 3% decline,” Schiff said. “But while gold recovered some of those losses today, bitcoin crashed by another 9%. Also, while gold is down 9% from its 2021 high, bitcoin is down a whopping 50%,” he added.

If you really want to buy bitcoin, wait until Microstrategy sells its last satoshi. If MSTR keeps selling stock and borrowing money to buy into a falling market, existing or new shareholders will be forced to liquidate. [Michael Saylor’s] diamond hands are really made of glass.

One individual defended Microstrategy’s CEO and told Schiff to debate Saylor or stop criticizing a “technology that you don’t understand.” Others stated in the Twitter thread that Schiff has already offered to debate Saylor, but the Microstrategy executive allegedly “has not taken him up on it.”

In another tweet on Tuesday, Schiff went after Digital Currency Group’s CEO Barry Silbert. “In Mar. [Barry Silbert] promised GBTC investors he’d close the 10% discount to NAV by buying back $250 million of shares,” Schiff wrote. “And then in early May he promised to increase the buy to $750 million. So far he’s purchased less than a third of that amount. What are you waiting for Barry?” Schiff asked the Digital Currency Group executive.

“As bitcoin crashed below $30K, CNBC invited [Mike Novogratz] to try to pump it back up,” Schiff remarked after his many anti-bitcoin tweet bombs on Tuesday. “Novogratz claims Bitcoin can’t keep falling as there is all this new institutional demand. Assuming some institutions were getting interested above $60K, I’m sure they’ve lost interest below $30K.”

Of course, Schiff’s son Spencer Schiff got in on the action after his father tweeted about bitcoin doing a dead cat bounce.

“Don’t get excited about bitcoin’s dead cat bounce from an intra-day low of around $28.6K to near $32K,” Schiff’s tweet scathed on Tuesday. “Nothing drops in a straight line, [especially] a token as highly manipulated as bitcoin. As this bear market grinds on, about 55% so far, better to sell the rips than buy the dips,” the economist added. Spencer, however, snarkily snapped back at his father and said:

The Bitcoin forecasting wizard has spoken.

However, in terms of likes and retweet ratio, Spencer’s father had more likes and retweets. Others defended Spencer Schiff’s statement and said that Peter has been “spectacularly wrong about Bitcoin multiple times over a decade. If he’s right this time it will be purely a broken clock situation.”

Besides the dead cat bounce commentary, Schiff also described an alleged head and shoulders pattern in the BTC/USD chart. As usual, Schiff declared that the leading crypto asset’s fiat value was on its way to zero.

“The most ominous thing about bitcoin’s head and shoulders top pattern is that with a head near $65K and a neckline around $30K the pattern measures a move to zero,” Schiff wrote. “That’s because the pattern projects a move below the next line that equals the move from the neckline to the head.”

“Funny how you’ll apply low probability TA (technical analysis) to BTC, but you won’t even consider the annualized returns of bitcoin over the last 10 years,” an individual responded to Schiff’s head and shoulders tweet.