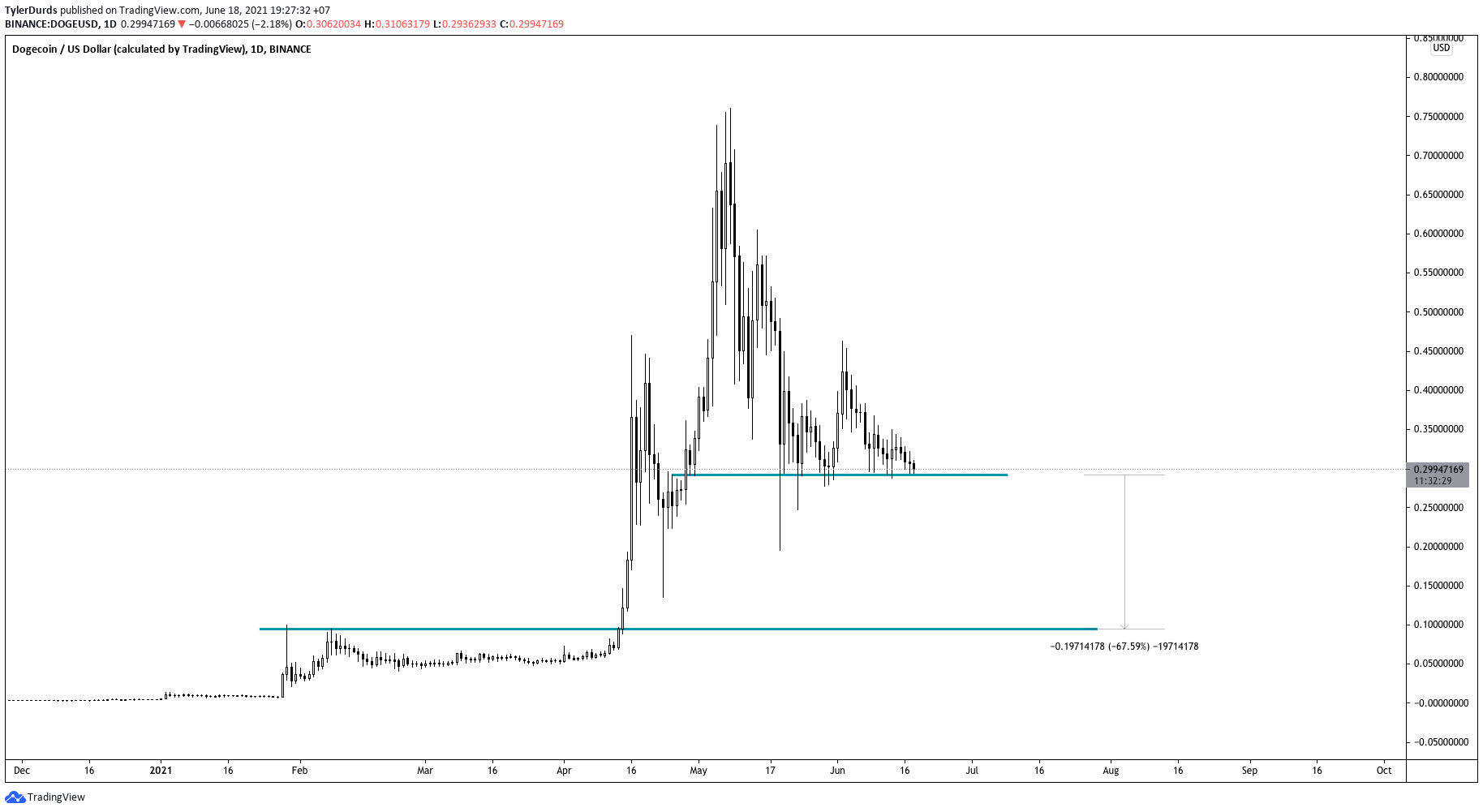 Since Elon Musk appeared on SNL in May, Dogecoin has crashed more than 75%. On Tuesday, the meme coin became the worst performing digital currency as investors fled.

Dogecoin Unholy Romance With The Dogefather

Earlier in the year, Elon Musk began tweeting about Dogecoin. His tweets served as a good signal for crypto investors as investors flocked to the coin as the price skyrocketed. Musk helped to put the meme coin on a pedestal, making it one of the top ten cryptocurrency.

However, this wasn’t going to last.

Dogecoin plunged over 75% from its ATH 45 days ago. The meme cryptocurrency lost 24% over 24 hours to hit $0.17413, according to CoinGecko. That was around 76% lower than its record high of more than $0.70, reached in May amid expectations that Elon Musk would use his “Saturday Night Live” performance to pump the token.

The market cap of the coin also fell to a whopping $23 billion on Tuesday from a peak of $94 billion, a loss of $71 billion.

Since the Tesla CEO’s appearance on Saturday Night Live (SNL), Dogecoin price has been in southward movement. The $1 promise land the Dogecoiners expected continued to slip, yesterday’s crash capped it.

“Many expected Elon Musk’s SNL appearance to send the already-soaring dogecoin even higher,” Michael Kamerman, CEO of crypto firm Skilling, said. “It had the opposite effect.”

Cryptocurrencies have fallen dramatically since May after Elon Musk halted payments for Tesla in bitcoin, citing its “insane” energy use, and China started cracking down on crypto “mining.”

Many eyes turned to the Dogefather during this price drop. Former Bitrefill CEO John Carvalho quipped about Musk’s absence:

Carvalho went on to criticize Elon:

“To lazy passers-by, I’m not a dogecoiner, I’m asking him (Elon Musk) to own up to being a colossal dou*** nozzle.”

Musk’s disappearance from the DOGE plunge, however, was not protracted, as he was seen Tweeting about ecosystem developments relating to the meme-coin, much to the relief of the Dogearmy. In response to Dogecoin creator Ross Nicoll’s Tweet regarding the fee reduction code and a probable live demonstration of it on the coin testnet, Elon praised it as “an important improvement.”

This is an important improvement

Recently, pseudonymous analyst Tyler Durden highlighted a “Head and Shoulder” pattern and hinted that the alt’s price has a tendency to crash once it breaks below the $0.299 support level (which it did). He further claimed this time even the Tesla CEO can’t save DOGE:

“Even Elon can’t save this with his tweets. He’s tried and each time he just created another lower high. 0.05 is programmed.”

In addition, analysts have long warned that the meme-coin is a case of speculative mania, with the price influenced more by celebrity-induced buzz than anything fundamental.

“In this climate, it’s not a surprise that dogecoin, which began its crypto journey as a joke, has suffered one of the steepest declines in recent days,” said Susannah Streeter, senior markets analyst at broker Hargreaves Lansdown.