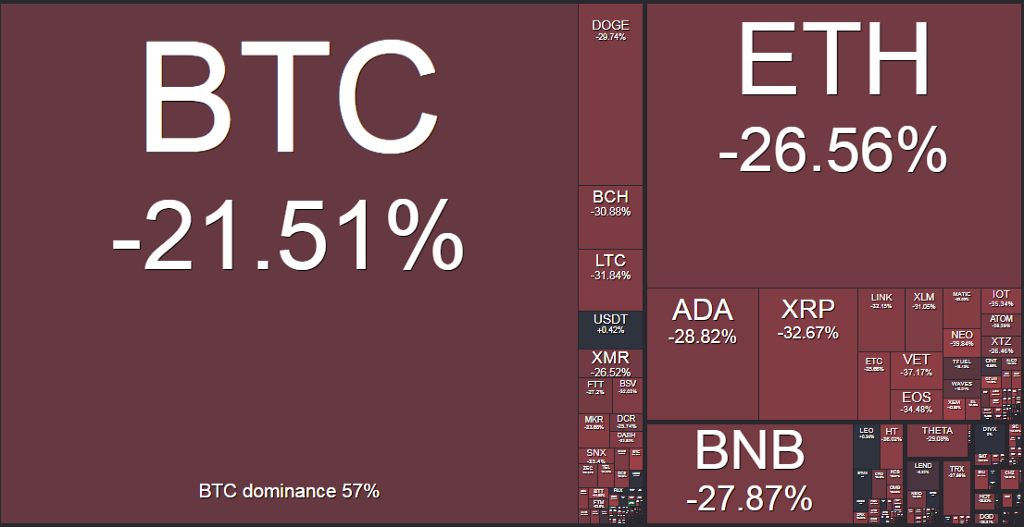 The recurring ‘China bans Bitcoin’ story that we have all become familiar with over the years appeared to hold greater weight recently.

This week in Crypto

A long-held bearish narrative of Bitcoin skeptics and often a key reason why many conservative investors have held back from taking on exposure to crypto is the dominant role that the People’s Republic of China has held in the crypto markets and especially the Proof of Work mining industry of Bitcoin. In the first decade of Bitcoin’s existence, this concern was justifiably valid, with a majority of hash rate concentrated in two main provinces in China. Xinjiang, where the energy mix for producing electricity is predominantly coal, and Sichuan, where hydropower dominates. For years Chinese miners would move with the summer rainy season between the two provinces, constantly seeking out the cheapest cost of electricity and even incentivized by the Chinese government with the establishment in 2019 of Hydro-electricity Consumption Industrial Demonstration Zones in Sichuan. These special ‘demo zones’ provided cheap surplus electricity to numerous energy-intensive industries at discounted rates and tackled the problem of oversupply of electricity production during the summer rainy season in Sichuan. The CCP estimated that in 2016 there was a staggering 14.2 billion kWh going to waste, enough to power ~1.3million US homes. At first glance, these proactive measures seemed to be a positive step in the direction towards China accepting Bitcoin mining whilst simultaneously solving the problem of energy wastage when their hydro dams were full. This incentive program also significantly enhanced the global renewable energy mix globally for the Bitcoin network, which in recent months has been an intense focus point of mainstream media, politicians, and institutional investors.

Alongside recent ESG concerns, a key apprehension with investors and China is that with such concentration of mining in one country, the risk is that China’s miners could, perhaps under the instruction of the CCP, coordinate a 51% attack on the network. This has been a long-standing risk and attack vector, albeit with a lower probability of success as the network matures and decentralizes over time.

Despite China’s leading share of global hash-rate, the recurring ‘China bans Bitcoin’ story that we have all become familiar with over the years appeared to hold greater weight recently as instructions came down from the most senior CCP official to date, Vice Premier of the CCP Liu He.

The second is to resolutely prevent and control financial risks…. strengthen the supervision of platform enterprises’ financial activities, crack down on Bitcoin mining and trading behavior, and resolutely prevent the transmission of individual risks to the social field — Vice Premier of the CCP Liu He

It is always challenging to interpret how these signals in China will affect markets, but now a month or so later, it is becoming clear that the Bitcoin mining industry in China is being forced out for good. ASIC miners are turning off and looking to migrate out of China, which is reflected in the steady drop off of hash-rate across the network since May’s statement from Liu He. Taking things further and following He’s statement, last Friday, the Sichuan Energy Bureau and the Sichuan Development and Reformation Commission ordered the complete shut down of all the mining facilities that were previously incentivized to locate into the demo zones, a painful u-turn by the Chinese authorities and a permanent blow to any remaining confidence that Bitcoin mining investors had when deploying capital in China.

The order also addressed the grey market for bitcoin miners, where many unofficial mines operate outside of the government-controlled so-called demo zones and instead hold bilateral agreements with privately-owned energy producers. State-initiated inspections across this sector of the market have been ordered, and closure of miners found operating will occur if found.

The news last month created intense selling pressure from speculators and Chinese miners who, based on on-chain metrics, appeared to be liquidating holdings on the Chinese exchanges. Much of this news story should already be priced in, however, like many complex developments in China, it is likely to throw up some unexpected consequences in the months ahead as miners close and migrate to more reliable and favorable jurisdictions. Watch this space.

This is a key moment in the history of Bitcoin mining, and over the next 6 months or more, new mining locations will be sought across the globe, with would-be crypto progressive jurisdictions competing for the technology, jobs, and peripheral industries associated with the $15-$20bn per year (in revenue) industry.

Bitmain, the largest producer of mining hardware, was quick to take a proactive lead in shaping this new reality for Chinese miners and held a conference last week which in part explored the options now available to many of Bitmain’s Chinese customers of the ASICs they manufacture.

Impressively, Bitmain has sourced and secured potential locations for companies to relocate to and, in doing so, protecting their customers and Bitmain’s bottom line. The above example slide from the conference is showcasing energy prices in multiple states within the US where miners could theoretically reestablish themselves and secure Bitmain’s order books. They had even arranged video links with celebratory investor and commentator Kevin O’Leary and the Governor of Texas, Gregg Abbot who both promoted the USA, specifically Texas in Abbot’s case, as reliable, secure, and friendly locations to establish long term businesses away from China.

This seismic shift in global hash rate distribution may alleviate the centralized concerns of the mining industry and will, in time, hopefully, result in a more decentralized, robust, and secure network. Perhaps market manipulation concerns from regulators will be eased somewhat, increasing the likelihood of the approval for a long-anticipated US-listed ETF. Every way you look at it, in the medium to long term, the actual banning of mining in China is a net positive for the entire industry, not just Bitcoin.

Chinese centralization aside, there is still a long way to go to alleviate all the concerns associated with Proof of Work mining. It will be fascinating to track how Ethereum’s migration to Proof of Stake plays out and how the market interprets the second-largest cryptocurrency’s move from capital asset to yield generating productive asset. Bitcoin is very unlikely to ever follow Ethereum into migrating to the far less energy-intensive Proof of Stake consensus mechanism however it is worth noting that despite the proof of stake Eth2 Beacon Chain yet to be merged with Ethereum mainnet, nearly 5.5m ETH has already been staked. Impressively, this is a value of ~$11.5bn or ~4.5% of the total supply. Clearly, demand for yield is attractive for crypto holders, as evidenced by the rise of DeFi total value locked and an increasing percentage of ETH volume being staked. The ‘productive asset’ narrative is a strong one, and the competition and differences between Proof of Work/Bitcoin and Proof of Stake/Ethereum will become increasingly tense as this year progresses. More on this next week.

Dude where’s my hash? was originally published in The Capital on Medium, where people are continuing the conversation by highlighting and responding to this story.