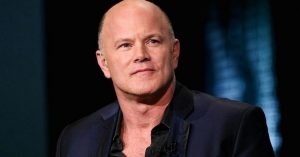 Mike Novogratz, the Chief Executive Officer of cryptocurrency assets management firm, Galaxy Digital, has reiterated his trust in the capabilities of Bitcoin (BTC) and cryptocurrencies as a viable asset class. Speaking in an interview on Bloomberg Live, Novogratz said that he views Bitcoin as a form of digital Gold.

"I look at #Bitcoin in particular as digital gold. It has the same macro tailwinds but it's also very easy in the adoption curve. I'm still a big buyer of Bitcoin." Founder & CEO @GalaxyDigitalHQ @novogratz #QatarEconomicForum pic.twitter.com/DuZHIC0yPY

Novogratz is one of the major Bitcoin bulls helping to shape the perception around the broader cryptocurrency industry. His company, Galaxy Digital is not only fronting the crypto products and services to serve its clients, but Novogratz himself has also hinted that he holds Bitcoin as a store of value. Per the interview, Novogratz noted that the digital asset is still in the early stages of its adoption curve, with more room for increased embraced.

The current trends in the digital currency ecosystem are notably distinguishing those in it for the technology and not just the quick gains. Amidst the general downtrend, Bitcoin flash crashed to its monthly low at $28,893.62, before recovering back to $32,623.99 according to CoinMarketCap. Despite the inherent risks in volatility that the premier digital currency poses, Mike Novogratz said he is still a “big buyer of Bitcoin.”

Just like Mike Novogratz, a number of Bitcoin proponents have remained unmoved amidst the growing clampdown on cryptocurrency mining and other digital assets trading activities in China. Anthony Pompliano, the very vocal Bitcoin evangelist tweeted earlier saying, “Yes, I bought the dip.”

Changpeng Zhao, the CEO of the world’s largest cryptocurrency exchange, Binance also braced his 2.8 million followers on Twitter, saying that “selling on FUD is a sure way to be poor.”

Selling on FUD is a sure way to be poor.

The words of major players in the cryptocurrency ecosystem are seen by many as an anchor at a time when the market looks bleak. Novogratz explained that Bitcoin, decentralized finance, NFTs, and other top crypto innovations are the next major trends shaping the digital economy and the financial world. To help fast-track the embrace of Bitcoin, especially among conservative investors, Galaxy Digital has joined the race in applying to float a Bitcoin ETF product with the Securities and Exchange Commission.

The post Dip or No Dip, Mike Novogratz Says He is “Still a Big Buyer of Bitcoin” appeared first on Coingape.