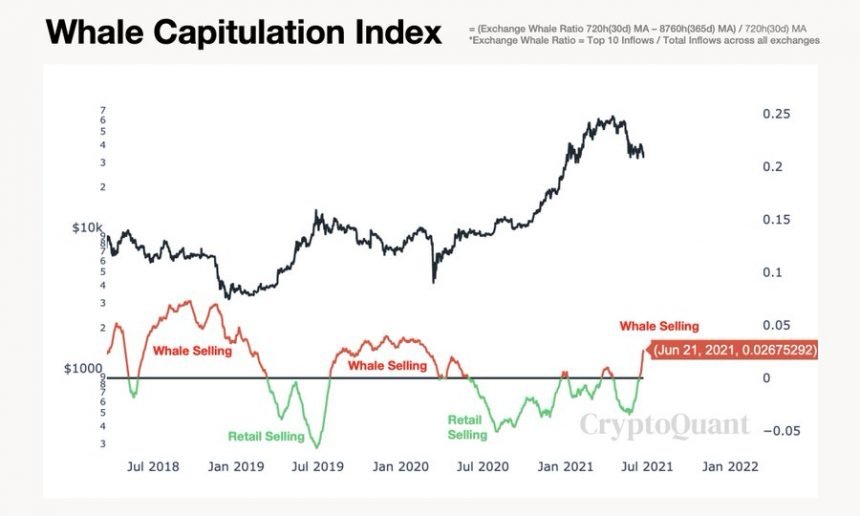 Bitcoin has rebounded from the higher area of the $20,000 price zone. At the time of writing, BTC trades at $32,475 with rising volatility in the past few days.

The bulls have had a hard time during May and June, as the bears took over the price action with an increase in selling pressure across all exchange platforms.

As Bitcoin moved into critical support at $29,000, CryptoQuant recorded a rise in BTC inflows to exchange. As the image below shows, the last time this much BTC entered exchanges was in March 2020, when BTC’s price fell just below $4,000, on the “Black Thursday”.

In addition, CryptoQuant recorded a 7-day moving average of spot exchange net flows turning positive. The last time this metric was at similar levels, Bitcoin experience distribution in the $50,000 range.

Many traders have been questioning the validity of the amount of BTC inflows to exchange as a relevant metric to predict a course in the price action. Some believe Whales can easily manipulate the market by sending BTC to these platforms and benefit from the fear experienced by investors.

However, CryptoQuant CEO Ki-Young Ju believes this type of “psyops is almost impossible”. The platform uses a mechanism to measures exchange flows data by the number of transactions. Thus, they calculate their data by looking at aggregated flows and not a single transaction.

This is why we need to see aggregated flows rather than a single transaction like Whale Alert. Each transaction can be easily manipulated by whales. To ruin our data, whales need to send over 10K+ BTC, but most of the large TXs are internal transfers from exchanges.

The only way for this data to be inaccurate, Young Ju added, is for Whales to coordinate their transactions. In that way, exchanges will receive tens of thousands of BTC inflows, and “the data will be ruined”. Young Ju added:

(…) but it hasn’t happened yet. It’s very expensive and dangerous for security reasons, so I think whales can’t do this orchestrated effort

In a separate tweet, CryptoQuant CEO claimed that Bitcoin has “confirmed” a bear market trend. He based his statement on the high amount of BTC inflows to exchange, as shown in the platform’s Whale Capitulation Index.

Whenever whales have begun to sell BTC in these amounts, the price tends to the downside, CryptoQuant’s chart suggests. However, Young Ju said that investors shouldn’t rely on a single indicator to predict the price action.

Young Ju received some critics for this statement. Economist and crypto analyst Michaël van de Poppe replied the following to this claim: “I see 0 correlation” between a bear market and BTC exchange inflows. Later, the executive clarified:

To be clear, I expect my $BTC bearish bias won’t last long (maybe just a few weeks) because the market looks good in terms of supply/demand in the long term (e.g., Stablecoins ratio(USD) and SSR). So don’t get me wrong, I’m not saying it’s over.