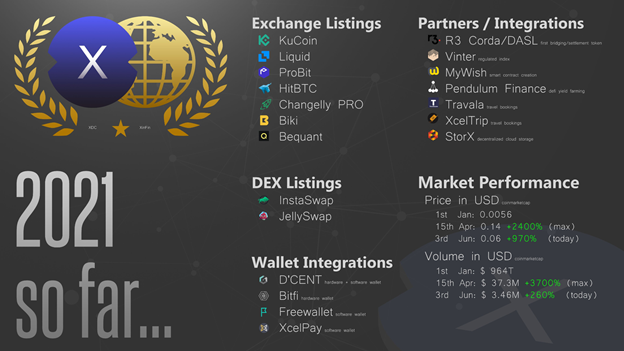 XinFin Network (XDC) is the most prominent, and fast-growing ecosystem. XinFin Network’s XRC20 based token standard now has the support of the biometrics hardware wallet, D’CENT.  In a recent tweet, D’CENT wallet confirmed its support for the XRC20 token, StorX Network (SRX).

We are excited to announce a new partnership with @StorXNetwork and to support a new XRC20 protocol $SRX based on the @XinFin_Official blockchain network. pic.twitter.com/BCpu6UF11R

XinFin and its Achievements

XinFin Digital Contract (XDC) is the digital asset that powers the XDC hybrid blockchain network. The XDC token works as a settlement process for decentralized applications (Dapps) built on the XDC Network, including TradeFinex, a network for trade finance originators to distribute trade assets to the growing class of alternative asset investors.

XinFin’s hybrid blockchain proves to be highly efficient, enables instant transactions and trades, secure to the topmost 1st tier. It becomes the preferred selection for most financial firms due to its maneuverability on liquidation. The gas fees are extremely negligible, accounting for only $0.00001. Another main aspect promoting XinFin XDC is its rated energy consumption of just 0.0000074 Twh making it get the status ‘Green’. The transaction per second speed of XinFin mounts to 2000.

The below chart shows the achievements that XinFin has accomplished for 2021.

XinFin has been listed on the top cryptocurrency exchanges. These include HitBTC, Changelly PRO, WBF Exchange, KuCoin, Liquid, Indodax, Bitfinex, Bitrue and many more. The platform also made fabulous partnerships and also wallet integrations.