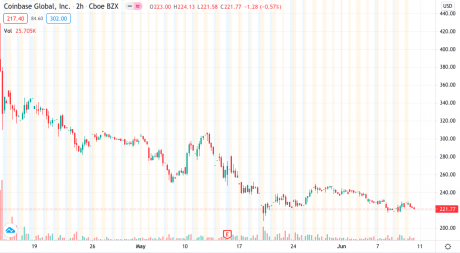 In an interview with CNBC earlier this year, Kraken CEO Jesse Powell shared that the company was considering going public via a direct listing in 2022. Coinbase went public less than a month later, and now just a few months after the Wall Street debut, Powell and company may be having second thoughts.

The IPO… I Don’t Know

Kraken is a top 3 exchange when ranked by volume, and continues to grow. However, Kraken’s future when it comes to a public listing is still a question mark. In a recent appearance on Fortune’s video series “Balancing The Ledger”, Powell stated that the firm was taking a harder look at going public, especially when it comes to a direct listing.

“An IPO is looking a little more attractive in light of the direct listing’s performance”, said Powell. “I would say we’re looking at it more seriously now having the benefit of seeing how the direct public offering played out for Coinbase”.

In just a few short months, Coinbase has seen it’s initial valuation cut by roughly a third, going public at over $68B, to a present day valuation just shy of $48B. The company is nearly ten years deep in operations, and undoubtedly still feeling strong about it’s long-term successes. Additionally, the company is paving the way for other crypto-focused businesses to follow suit. However, the direct listing approach for the firm appears to leaving investors wary, and to Powell’s point, has likely been a “watch and learn” experience for some of the biggest public-facing crypto firms considering going public.

Can Kraken Crack The Code?

Despite the struggles seen from Coinbase shares, bolstered by a less than stellar earnings report debut, CEO Brian Armstrong saw the direct listing route as appropriate. Armstrong told CNBC in April that a direct listing was “more true to the ethos of crypto”.

Kraken’s Powell doesn’t quite see it the same way. “I think [Wall Street] is so tied up in the legacy way of doing things”, Powell said in his recent appearance. Nonetheless, Powell didn’t commit one way or another when it came to direct listing vs. IPO – but he did rule out one ‘hot’ public route: SPACs, or special purpose acquisition companies. SPACs have been an increasing topic and rumor-mill for emerging companies, such as crypto start-up Circle.

It remains to be seen what approach Kraken and other emerging crypto firms will take, but rest assured that they are paying close attention to the market forces at work.