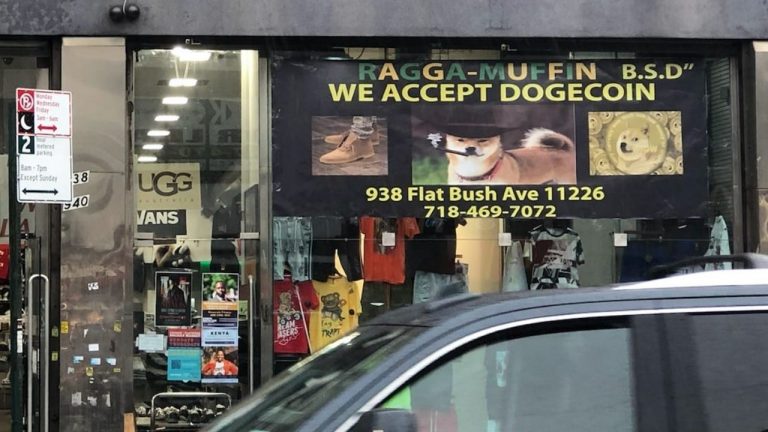 On the heels of the SpaceX announcement that the company accepted dogecoin as payment, an apparel store on Brooklyn’s colorful Flatbush Avenue took the jump as well into the deep, cold Doge waters.

Brick-and-Mortar Is Another Brick in the Crypto Adoption Wall

Crypto adoption has been widely and thoroughly discussed in the media and on social networks, as both an investment vehicle and a payment method. Companies large and small have declared their willingness to accept this or that cryptocurrency in return for their services or products; some companies have even reversed such decisions.

While bitcoin has attracted most of the attention in the adoption debate, not far behind it is turned-serious dogecoin. In Cryptwerk’s Dogecoin Directory there are “1300+ places, stores and services accepting dogecoin” though only a handful are physical stores. Bitcoin cash has quite a few locations around the world where it is accepted as well, including many brick-and-mortar locations.

Still, even among the most enthusiastic advocates of cryptocurrencies, the experience of strolling down the street, entering a store or a cafe and paying with crypto as an everyday occurrence, remains largely unrealized.

Enter Ragga Muffin on Flatbush Avenue in Brooklyn, New York, which recently started accepting dogecoin. The clothing and footwear store that has been open since 1992 has decided to accept the trendy crypto “because young people are all about dogecoin,” says the store owner, who asked to be identified only by his first name, Dan.

Many of our young customers are excited about cryptocurrencies in general and specifically about dogecoin so I wanted to be the first store in Flatbush to accept Doge, to attract more customers.

Dan himself owns dogecoin, and ethereum. His investment philosophy isn’t compatible with the prevailing hodl gospel. He is a hands-on trader, chasing the dips and tips to turn quick profits. As a testament to that, his aspirations for dogecoin weren’t for $1, but rather for $0.35.

Dan was reluctant to disclose sales figures generated from his recent business endeavor, but seemed very pleased with his decision to accept crypto in his store.

A lot of people come in when they see the sign, it creates a hype. Some are asking if we also accept bitcoin. I tell them no – go buy Doge and come back!

Dan didn’t provide a concrete answer as to why he doesn’t accept bitcoin as well.

On the Dogefather himself, Dan had only good words:

Elon Musk did a great service for the Doge community. Before him, who knew about Doge? I sure didn’t. I hope he’ll continue promoting it. I’m waiting for him to say that you can buy a Tesla with Doge, that’ll sure send Doge to the moon!

What would you like to be able to buy with cryptocurrency? Let us know in the comments section below.