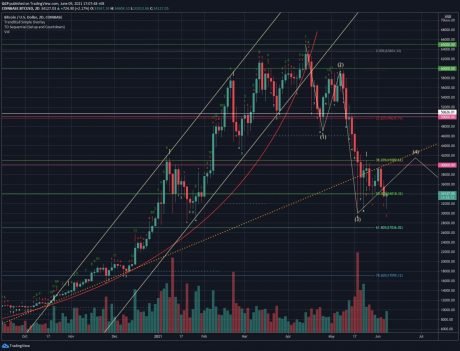 Bitcoin trades at $36,786 and records profits in the 7-day chart, after two consecutive weeks of losses. In the 30-day chart, BTC still has a 32.3% loss. The price action painfully moves higher in the current range, but without conviction from the bulls.

The crypto market seems to be stagnated after BTC’s price crash. The battle has been fought by short-term holders selling their coins to long-term holders, but institutions have been mostly absent during the correction.

Data from CryptoQuant suggest institutional demand for the Grayscale Bitcoin Trust (GBTC) and the Bitcoin Fund launch in Canada by investment fund manager 3iQ is decreasing.

As seen below, the GBTC has seen a negative premium and has been trading at a discount since March 2021. This caused discomfort and concern from their clients and Grayscale’s parent company, Digital Currency Group, was forced to intervene. The company had to buy several million in GBTC shares.

Unlike the Canadian QBTC, the GBTC has been holding its Bitcoin. The QBTC reduced its holdings to 7,980 BTC at the beginning of June. Thus, creating selling pressure in the crypto market, as seen below.

The general sentiment in the market has been negative, despite the news of the adoption by nation-states. At the start of the current week, BTC’s price saw some positive development. This coincides with a decrease in GBTC discount from 12% to 7%.

As Lex Moskovski, CIO at Moskvski Capital, shown in the last 2 days, the number of addresses accumulating BTC saw a leg up after a period of consolidation. However, the selling pressure has not decreased, as the increase in BTC inflows to exchanges suggests.

Will Bitcoin Bulls Managed To Push The Bears Back?

At the moment, Bitcoin’s price could still be dominated by uncertainty and no clear direction. As a report by QCP Capital states the BTC sell-off has been “deeper and sharper” than expected.

The sell-off has come in 3 waves since the beginning of May. The market could see another sell-off, but in the form of consolidation as the firm claims:

it looks like BTC is setting a bottom for the Wave 4 rally higher. This Wave 4 however will most likely be a slow steady consolidation grind.

Bitcoin has two challenges in the short term, it must flip $38,000 from resistance to support and must overcome the “formidable” wall at $40,000. Bitcoin thesis as a store of value seems to be invalidated in the short term, as the low institutional participation suggests. Therefore, there is less demand for the cryptocurrency.

(…) all three of the bull cases for BTC have been invalidated, and it’s hard to make a bullish fundamental argument to buy BTC right now. we continue to expect the downtrend to persist and for the market to be on sell rallies mode in the near-term at least, and if Wave 4 does extend past $40k we expect the $50k to have even larger selling supply.

it was the CPI print last month, coupled with a confluence of some other factors, that started the big BTC decoupling.

The firm sees potential for the price to drop below $30,000 and expects $20,000 to be strong support if this scenario materializes.

11/ BTC price looks likely to remain capped till year end. Market seems to have settled somewhere in between downside fear and a wait and see approach. Retail volumes have thinned out and movements from whales are dominating the price action