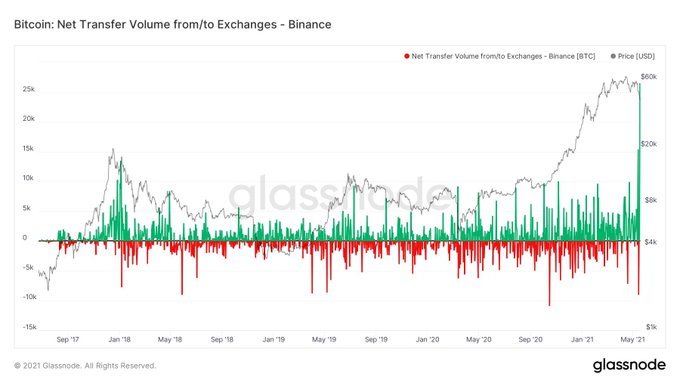 The price of Bitcoin dips below $40k, triggering bearish sentiment. BTC is now down 40% from its highs, making this in line with the worst drops of 2017. Currently, Bitcoin is holding the 200-day moving average, having wicked below it briefly during the early hours.

William Clemente III noted that Bitcoin inflows into Binance have never been higher, at around 27k units. This would suggest sellers are keen to liquidate their holdings, adding to the bear case and denting the narrative around Bitcoin as an institutional-grade store of value.

He signed off by saying now is the time to jump ship.

“CEO’s who followed@michael_saylor‘s asinine advice to plug their balance sheets into #Bitcoin to hedge against an expected annual #inflation rate of 2% are now down as much as 34% on their “hedge” in one month. That’s 17 years of expected inflation losses. Time to pull the plug!”

Saylor has been a prominent figure in promoting Bitcoin for corporations. Earlier this year, MicroStrategy hosted an online event in which he shared MicroStrategy’s playbook on investing in BTC as a treasury strategy. Over 1,400 firms attended the event.

In response, Saylor posted a screenshot showing gold’s return vs. Bitcoin over the last 12 months at -77%. This was triggered a frenzied outburst from Schiff. He called Saylor a coward for not wanting to debate him on the gold vs. Bitcoin argument.

“Also, instead of just posting irrelevent [sic] replies to my tweets, why don’t you agree to debate me? So far you have turned down every opportunity to do so. It’s clear to me that you’re afraid to actually confront me and defend your ridiculous views, so you take the coward’s way out.”

Saylor countered by saying the basis for the debate is unclear as Schiff has a wide scope of recommendations, not just gold. Adding that his caveat of buying “just not too much” of everything fails to give any definitive answers.

MicroStrategy Adds To Its Holdings Again

Undeterred by the bearishness, Saylor announced another Bitcoin buying spree for MicroStrategy – the second since the Elon-FUD of last week.

In a tweet, the MicroStrategy boss said the firm spent $10 million to acquire an additional 229 BTC.

Bitcoin is at a critical juncture. Time will tell if Saylor’s confidence in it is justified.