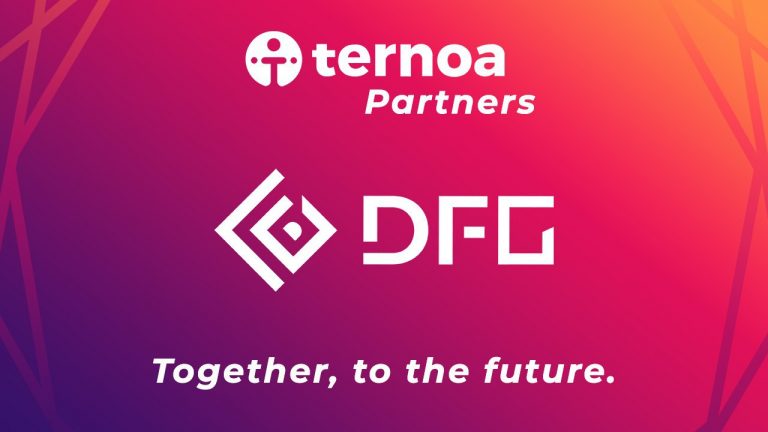 The international investment firm, created in 2015, now manages over $1 billion in assets. Always on the lookout for promising projects, the company was able to detect and invest early on in initiatives such as LedgerX, Brave and Circle.

Their influence within the ecosystem is well known. They are among the main contributors in the creation of the stablecoin USDC and part of the select group that leads investments in the Polkadot ecosystem.

The DFG team includes industry experts such as James Wo, Terry Culver and Joanna Liang, whose skills will accelerate Ternoa‘s development. The investment firm now has dozens of employees worldwide and a team of skilled researchers who identify trends in digital assets.

Ternoa now has an international exhibition

After the announcement of its Initial Dex Offering on DAO Maker and Ignition, the Ternoa project, developed by the French company Capsule Corp, is starting a new phase of its expansion. Such support consolidates the company’s ambitions. Thanks to its influence in the ecosystem and its relational network, DFG will improve the international exposure of the project.

While such a partnership illustrates the confidence that one of the world’s leading crypto players can have in Ternoa, it also expresses their willingness to accompany the French project in the international market. Ternoa‘s blockchain promises to dissipate the barriers of time and DFG will take this ambition beyond borders.

The hard work done by Ternoa‘s teams is now paying off. Major international funds such as Master Ventures, GD10 Ventures, LVT Capital, and DFG will now have the common objective of increasing the visibility of the project and maximising the future value of the CAPS token.

A DFG spokesperson has expressed great enthusiasm for the new Ternoa partnership:

“At DFG, we are convinced that NFTs will be one of the major driving forces for the whole digital assets space. Ternoa is a decentralized data transmission blockchain based on NFTs, able to store, encrypt, and segment data over the long term, allowing users to transmit personally identifiable data according to configurable protocols. The first Dapp will be presented in the form of a mobile app, which will be an encrypted wallet for the transmission of capsules holding data such as photos, videos and private cryptographic wallet keys. We believe that its unique design will be suitable for many application scenarios, such as insurance and legal purposes, among others.

In addition, Ternoa’s decentralized storage (in cooperation with SIA, Filecoin) offers NFT transmission technologies that support the owner’s equity. Its distinctive and innovative features include a multifunctional NFT platform created for the Polkadot ecosystem as well as Intel SGX, providing security for NFT data storage modules.

Finally, Ternoa uses blockchain technology to connect our day-to-day experiences and has above-average social attributes, which is why we look forward to it becoming a “popular” app adopted by millions around the world.”

This new growth phase will be supported by the Initial Dex Offering which will take place at the end of May. DFG’s exposure and expertise will enhance the value of CAPS and democratise its use around the world. New partnerships, key development points, details of the IDO are all communicated on the team’s Twitter. This is currently the project’s preferred channel for announcements.