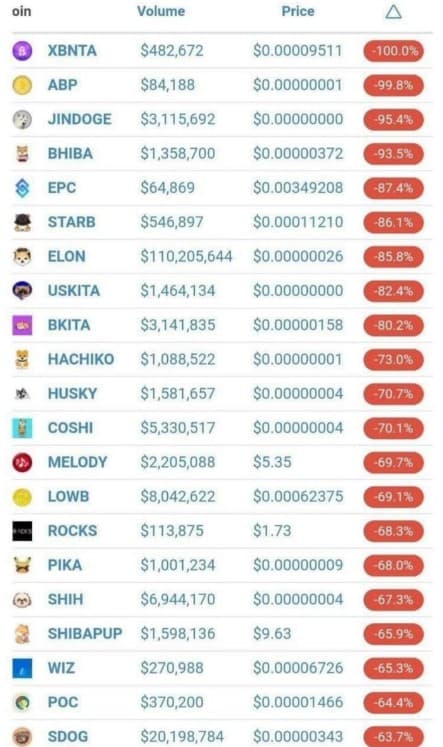 Today, that precedent has been shattered – Vitalik has proven that he has no qualms about selling off his ‘burned coins.’

A Wave of Sell-Offs Across Altcoins

Several small-cap altcoins followed suit after Vitalik dropped his bags – across the board, dog-related altcoins plummeted. SHIB was in freefall on Binance Futures, and KUMA (deployed by the SHIB contract owner) fell over 95% within mere minutes.

After the market-shaking event, Vitalik began making a string of huge donations. He sent over $1B in SHIB to the India Covid-Crypto Relief fund and made several other large donations to organizations such as GiveWell and Charter Cities Institute.

A bit of a backstory: many of the developers of the Dogecoin clones sent the majority of the coin’s circulating supply to Buterin’s public address as a “proof of burn,” banking on the fact that he wouldn’t dump them. Well, they were wrong. This is how the aftermath looks like:

The rise of meme coins during the past few weeks has been stunning to behold – Vitalik’s decision to market dump his coins has proven to be extremely polarizing.

One crowd of people championed Vitalik as the bastion of free-market principles, noting how greedy traders looking to make quick money in the markets got what was coming to them. Effectively, Vitalik took massive amounts of those gains back and put them straight into the hands of charities that will doubtless save thousands of lives. More conservative traders are pleased to see that ultra-risky bets don’t always play out as planned.

On the other hand, swaths of new cryptocurrency traders are enraged at Vitalik’s move that they view as an act of bad faith (seeing that the coins were supposed to be ‘burned,’ and Vitalik ‘should have respected that’).

Traders have lost billions in unrealized gains – one even spent $1.6K in gas to create an ERC-20 token called “F*** Vitalik Buterin.” One thing is certain – projects probably won’t be using Vitalik’s address as a burn wallet ever again.