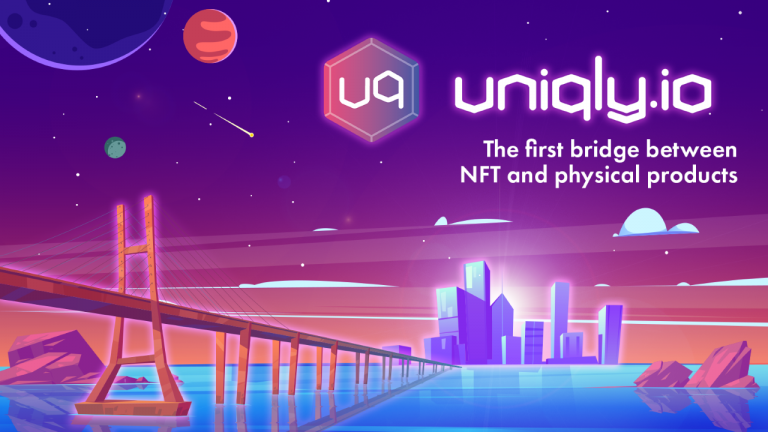 It’s been a while since the crypto market has seen such a promising project, something that has a clear basis on a real market need and a long-term plan to stay relevant and bring value to customers, investors, and users alike. Uniqly.io aims to do exactly that, giving real-world value to digital items.

Veterans of the space already know what non-fungible tokens are, and why they cost so much, but the mainstream market perception of them is poor at best.

Without tangibility and actual “proof” it’s difficult to understand why that particular string of pixels may be worth so much, and as such, even with people like Beeple making millions out of their work, NFT has been already categorized as a fad by a lot of so-called “experts”.

This can’t be further from the truth, as the expansion of the digital market is an unstoppable force, but to see a team recognize how to bridge that last connection between digital and physical goods, and act on it in less than 6 months is quite impressive.

Even more when you consider how the community reacted to this particular project.

You don’t see many projects be in such direct contact with their community. Following the overwhelming response of their user base, the Uniqly team moved up their first item drop, giving birth to the first physical NFT collection ever.

After a whitelist event, the 10 k t-shirt drop is planned to happen on the 12th of May, bringing to everyone the possibility to acquire limited edition NFT art printed on shirts. This will be just the first of many more rewards to come, but its significance can’t be understated, giving the public a perspective on how Uniqly listens actively to its community and tries to tie its project to actual demand from customers and investors alike.

Each design will be unique, just like its digital signature, and given the great success of previous FCFS sales, Uniqly will keep using this format, giving people that got on the whitelist a 30 minutes headstart to buy their favorite selection of shirts from the drop.

While it’s not the first time you see NFT being auctioned, it’s the first time that each item has real-world value, directly correlated to the unicity given by being an NFT item.

This not only ties well into a transition to the mainstream market, but it also gives a real-life example of what Uniqly is doing: filling a gap in the current market.

Looking at a lot of other crypto-based NFT projects, the public perception can get lost. People are riding this Bullrun, trying to quickly profit from a fad, and giving birth to single-purpose tokens with one-trick ponies projects.

Uniqly decided from the start to structure itself as a long-term project, with clear goals in mind, a plan behind them, and the willingness to take the time to perfect each of their steps towards the creation of their ecosystem.

Because just like the big names in crypto, what the people behind UNIQ are developing is a wide-facing marketplace full of high-value features.

While their website offers a full roadmap and a well-structured white paper providing users with detailed information, a mention of their services is still needed.

With the escrow and marketplace, Uniqly plans to have a continuous cash flow on their platform feeding the cycle of organic growth, and gaining in this way both a customer base of their own and develop a connection between peers.

This is crucial for community development and longevity, and seeing it already being implemented in the earlier stages is reassuring.

From the generator and materializator comes the user value: the ability to both create new NFT, or transform physical items in NFT and vice versa is crucial at the moment, taking the entire NFT ecosystem and giving it a funnel into the mainstream market.

The amount of uses a service like this has is staggering, and it’s a scalable service that will just get better as time passes. What is starting as a digital artist’s dream may branch in a lot of directions, each one more profitable than the last.

The staking pools are a treat for investors, closing the ecosystem of Uniqly three-pronged approach: high value to sellers and buyers, high value to artists and consumers, and high value to investors and partners.

All specifics about bonuses, can be found here. By combining some practices from well-established companies with the uniqueness of the NFT world, Uniqly selected method for vesting and staking are some of the most solid found on today’s market.

Weaving a web of connections to ensure a smooth transition to the following phases, the Uniqly team has allocated a sizeable chunk of their timeline to interactions with collaborators, sponsors, private groups, and partners.

During this initial phase, the team also handled some of the most delicate aspects of launching a project: funding, publicity, and community building.

And that’s where the real surprise comes: after the less demanding seed and private sale allocation, both UNIQ public sales crushed all expectations, managing to get to their hard cap in less than 10 minutes for their first sale, and in less than 4 for their second sale, which was also 300k USD higher than the previous one.

All detail can be found on their medium, and even more impressive than the community response was the team answer to such a massive outreach.

The first sale smoothness was praised both by investors and users, the telegram community expressed their satisfaction towards the Uniqly customer service team and the whole staff.

The second sale had a Hiccup in the form of their website crashing due to the massive volume of users, an issue that came as a surprise for a lot of people after the recent website update and its optimization.

The reason for the crash becomes clear when looking at the stats. The user demand was so staggering that 980k USD of UNIQ tokens went out in less than 4 minutes, making the sale even more successful than the last.

Uniqly team swiftly handled the problem, with the deployment of smart contracts via email lists gathered during the whitelisting process of the sale. The community response was also really positive, making it the second consecutive success of the team.

Already delivering on their promises, on April 15th the UNIQ token was officially listed on Uniswap, and despite the technical difficulties that ensued due to the ETH network changes after the Berlin hard fork happened on the 14 of April, Uniqly still did amazingly well, going from the listing price of 0.40 USD to the peak of 5.21 USD per token in the first 20 minutes.

A really important metric, and the reason why everyone is so sure about the potential value of this particular project, is another one, and the Uniqly team can safely say that they aren’t worried about it in the least.

With a staggering increase of more than 120%, the number of UNIQ holders has gone from less than 800 to more than 1.6 k in less than 48 hours.

The planning behind the project, the information available to the users, the transparency and capability of the team coupled with the current market condition are perfect for Uniqly to bloom, and smart investors are recognizing the value in holding the token..

This is a really good sign, and if the team will keep maintaining those standards the current landscape of the NFT world will change drastically once all features are deployed on the uniqly website.

They also don’t seem to slow down, as they kept releasing promising pieces of information. Staking is planned to come to their platform soon, as announced here, so let’s wait for another successful display by Uniqly.

Too Good to Be True

A well-laid plan, clear roadmap explained on their website, a competent and transparent team, various proven successes, great support from the community, all backed by a brilliant idea that exactly fills a real market gap that has become apparent in the NFT space.

While it seems too good to be true, sometimes things are just what they appear to be, and in this case, there are no indicators of the contrary.

For sure, it’s too early to tell, but with such a promising start, expecting great things from Uniqly is not that far off the mark.

To make a more educated decision, waiting for things to develop more and see how the team handles the next few weeks will be crucial, but for now, the future is rosy, assuming the team will be maintaining this level of competence going forward.