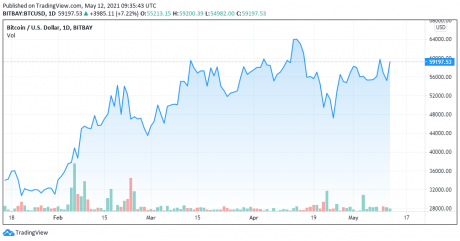 This three-months-and-counting consolidation period Bitcoin is in has many investors with the finger on the trigger. Even though we’re in the middle of an Altseason of sorts, mainly caused by the lack of price fluctuation Bitcoin is exhibiting, the hunters seem to be ready. A recent Arcane Research report shows that, in the last year, a whopping 8.45 million BTC have circulated. That’s 45% of the total circulating supply changing hands or, at least, wallets.

The last active supply circulation peak happened on February 23rd, 2018. At that time, 59% of the total was moving around. That was two months after the peak of the bull market. But, as Arcane Research points out, “We are still far away from the peak of the 2017-2018 era, both in terms of percentage and also in absolute values.” This means we could be on the verge of a new high octane ride. 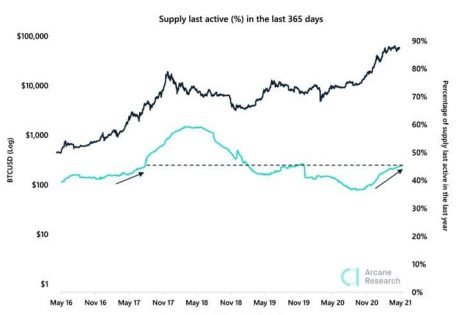 The larger the consolidation period, the bigger the uptrend

On a previous time that Bitcoin’s price flatlined, NewsBTC reported on an analyst’s prediction that came true with a vengeance.

Bitcoin could be on the cusp of seeing some massive momentum in the mid-term.

He is even setting his sights on a move to $40,700, which may act as short-term resistance.

“This consolidation on $btc has given more breathing room for our *allowed* mean reversion cushion. We could pump to 40.7k and still be within the accepted reversion band level above the basis. TLDR: Bullish on more upside for bitcoin soon.”

And over at our sister site Bitcoinist, they reported on a prediction of an imminent long-squeeze that also came true:

Bitcoin’s short-term upside potential is currently being hampered by the high funding rates for leveraged positions.

This could indicate that being long is an incredibly crowded trade and that a Bitcoin long-squeeze is imminent.

“TWAPs & daily opens seem to be really important these days. Funding is getting pretty high again though, so I don’t think there’s a whole lot of room for further upside.”

When the price fell, liquidations were brutal and wiped out Billions worth of contracts. The futures market broke all kinds of liquidation records, as traders were clearly overleveraged. That means that the road is clear. And the fear of inflation is not going anywhere:

The richest individuals in the world are now buying Bitcoin to prevent their wealth from evaporating into thin air. And if inflation expectations are only now breaking out from a ten-year downtrend, Bitcoin’s uptrend might only just be getting started.

Are we being too optimistic?

Despite all those signs, nothing’s guaranteed. The trading range has been thin for months and Bitcoin’s current active supply might be on the move, but other factors might be at play. And, as NewsBTC reported, a “reset” might come sooner than later.

According to cryptocurrency analyst Dave the Wave, who has supplied accurate analysis to the community through his Twitter soapbox for years now, Bitcoin could be looking at a strong “reset.”

Things might have taken off too quickly and too powerfully for Bitcoin price this time around, causing the LMACD to become overextended and brushing up against a long-term trendline.

It should be noted that Dave the Wave thinks that, after the possible reset, we’re “off to the races again.” So, the point is that even though the sea seems calm right now, we’re bound to see incredible action soon. The stage is set for a storm of epic proportions. And Bitcoins are moving around waiting for the right time to… move even more.