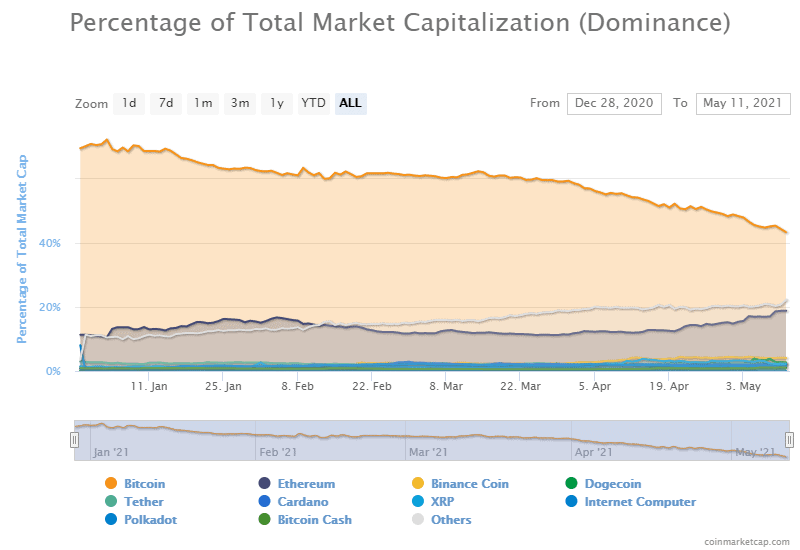 Apparently Bitcoin whales are not as loyal to their tokens as they are to the dollar value they represent. As time goes on and BTC fails to resume its bull run, there are fewer and fewer people with large amounts of Bitcoin in their wallets.

According to data from blockchain analytics firm Glassnode, the number of Bitcoin whales has been in steep decline since the beginning of 2021, going from 2,237 on February 7 to 1,943 earlier this week.

Why Are Bitcoin Whales Dumping Their Coins?

Such decline could have a number of causes, but the main ones could be:

The drop in bitcoin prices —or at least its slower price trend— is discouraging accumulation, making it unattractive to hodl tokens that lose value over time —especially in a manner as volatile as bitcoin does.

Also, expectations around rising interest rates in the United States makes it less attractive to invest in alternative assets like bitcoin. Since keeping money in the bank generates higher returns with less risk, many whales and investors who don’t do much with their BTC other than just hodling it are likely to exit their positions in volatile assets and move into fixed income assets.

And finally, the attractiveness of alternative cryptocurrencies that are reporting higher growth is causing a mass migration of funds. Bitcoin’s dominance is currently below 50%. Its current 42% puts loyalty at levels not seen since 2018, during the famous “Crypto winter”.

The Power of Memes

Assets with established pedigree such as Ethereum and BNB are reporting clear and sustained uptrends, gaining the attention of many investors. However, DeFi projects, NFTs and meme coins are the latest trend right now with ROIs that resemble the 2017 craze.

As Cryptopotato previously reported, CryptoQuant’s CEO believes that many investors could be selling their BTC in order to bet on the price of some Dogecoin clones —like Shina Inu (SHIB) which has spiked 1700% in the last week and a whopping 28600% in the last month.

Of course, this is bad news for Bitcoin. A drop in popularity and a surge in massive sales could put even more downward pressure on prices. Pankaj Balani, co-founder and CEO of the Singapore-based Delta Exchange maintained this thesis in a brief statement to Coindesk.

“The data looks bearish, as it shows a clear trend of whales offloading their holdings,”

However, this is not necessarily an imminent scenario. Bitcoin has still respected key supports within its bullish channel, and expectations around the implementation of Taproot and Schnorr have more than one maximalist excited.