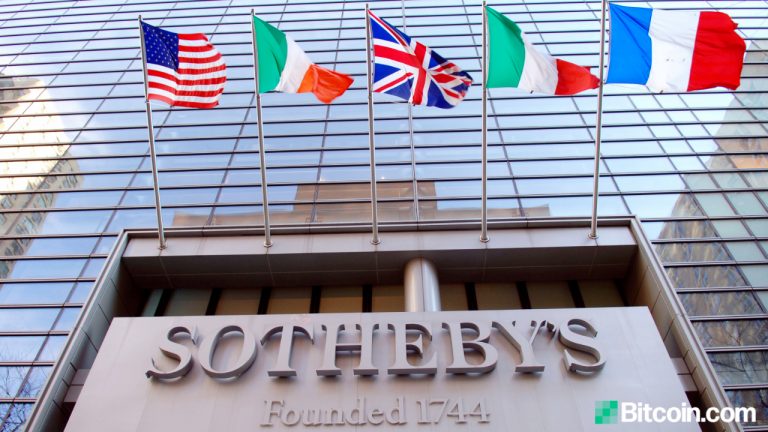 Sotheby’s, the world’s largest auction house, will start accepting cryptocurrencies for physical art. The first auction for which bitcoin and ether will be accepted is Banksy’s Love is in the Air image at the Contemporary Art Evening Auction. The piece is estimated to sell for between $3 million and $5 million.

Sotheby’s announced Tuesday that it will start accepting cryptocurrency via Coinbase. According to the auction house, this is the first time cryptocurrencies will be accepted for payments for physical art.

Established in 1744, Sotheby’s described itself as the world’s largest marketplace for art and luxury. With a network of specialists spanning 40 countries and 44 departments, “we host over 600 auctions annually and offer a cross-category selection of items available for immediate purchase via both digital and physical shopping experiences as well as private sales,” its website details. Artprice.com ranks Sotheby’s as the number one auction house by turnover, followed by Christie’s.

This is the first time cryptocurrencies will be accepted as payments for physical artwork and we’re really excited to make this happen.

He admitted that “It’s something we have been thinking about for quite some time.” The CEO further shared: “we had our first NFT [non-fungible token] sale a few weeks back. We had over 3,000 bidders and participants in that sale series.” Stewart added that the popularity of that sale “made us really think that we need to take this next step and begin to explore accepting crypto as payments for physical art as well.”

Coinbase explained Tuesday that Sotheby’s will accept bitcoin and ethereum for Banksy’s Love is in the Air image at their Contemporary Art Evening Auction and Coinbase Commerce was selected as the integration partner. According to Sotheby’s CEO, the piece is estimated to sell for $3 million to $5 million.

Through a bespoke solution, Coinbase will support payment estimated in the eight-figure range on Sotheby’s website, and in addition will help manage price fluctuations.

“The May 12th auction will be conducted in USD, but the buyer and artist will have the option to transact in either crypto or fiat currencies,” Coinbase clarified.

A digital artwork entitled “Everydays – The First 5000 Days” by American artist Mike Winkelmann, also known as Beeple, sold for $69,346,250 at Christie’s in March. It was the first non-fungible token (NFT) ever offered at Christie’s.

What do you think about Sotheby’s accepting cryptocurrencies? Let us know in the comments section below.