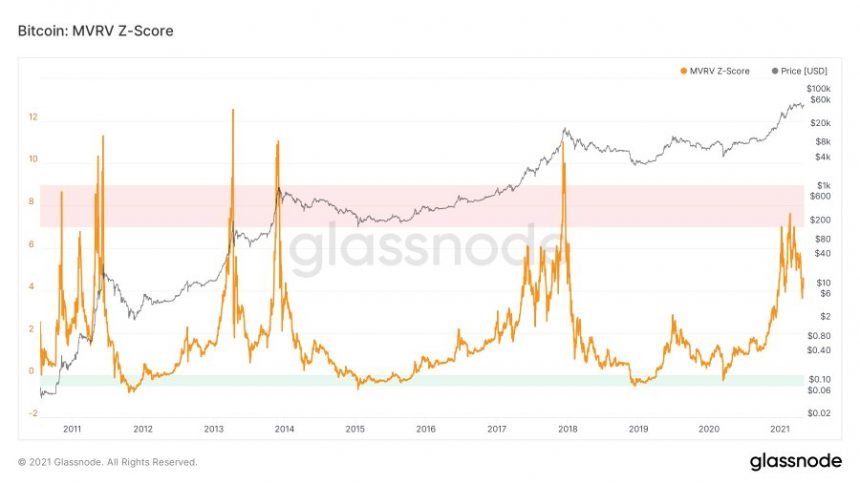 After a few days below the mid-range in the $50,000 zone, Bitcoin has retraced. At the time of writing, BTC trades at $54,137 with sideways movement in the 1-hour chart, approaching correction levels in the 24-hour chart. Certain indicators point to more depreciation, at least, in the short term.

The crypto market appears to be negatively reacting to statements from the U.S. Secretary of Treasury, Janet Yellen. The top 10 cryptocurrencies by market cap are in the red except for Dogecoin (DOGE) with a 30% profit in the daily chart and Litecoin with a 3.1%, at the time of writing. In the traditional market the hit was just as painful, according to Holger Zschhaepitz:

OUCH! Stocks tumble and Fear Index Vix jumps amid Tech Rout on Yellen’s rate remarks. Treasury Secretary Janet Yellen said rates may have to rise at one point to stop an econ overheating.

Yellen’s statements coincide with Bitcoin forming a Doji candle in the higher timeframes (30-day chart). This indicator forms when the price of an asset opens and closes at the same price and usually signals a trend reversal, as anonymous trader CryptoHamster said. The operator added the following:

(…) a doji candle (it usually signals for a trend reversal) matched the highs and/or reversals on all the major indicators. It does not mean that the bull market is over. But it means that it is wise to set the stop-loss order.

On-chain analyst Permatoro Niño claims Bitcoin could set a price floor around $54,000 to $56,000. A retracement to $50,000 “doesn’t look pretty” but could operate as a critical support zone.

According to the Realized Profits metric for the last 3 days, a metric used to measure the amount of BTC converted into profit by investors, there have been large green values around the $40,000 and $60,000, said the analyst.

However, the indicator has been on a downward trend and could support more appreciation if it continues. Permatoro Niño said:

One thing I always need to remind myself is that accumulation / distribution isn’t a single point in time, but moreso an extended period of time. It’s pretty clear that we’ve had one of those periods since the start of 2021.

Analyst William Clemente pointed towards a batch of 3,771 BTC moved to exchange platforms in the last 24 hours. The transaction took place before BTC retracement to current levels. In support of the bulls, the analyst reviewed Bitcoin’s Market Value Realized Value (MVRV), a metric used to measure potential local tops, and said the following:

After resetting over the last few weeks, this bitcoin bull run has a lot of room to run from here.