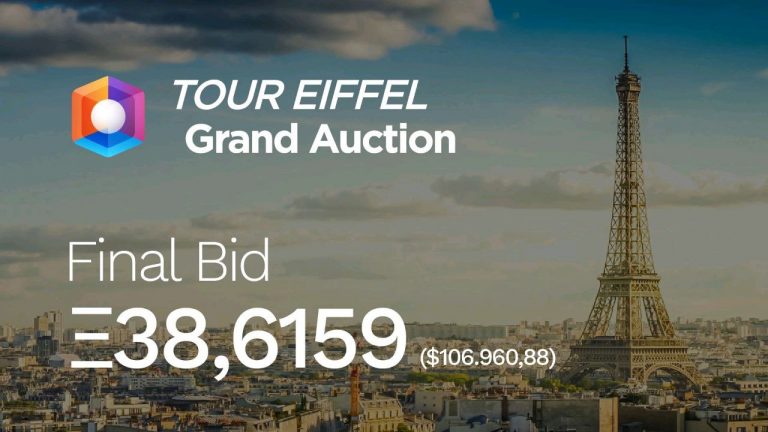 OVR.ai has sold the Eiffel Tower, putting it for sale as Non Fungible Token on OpenSea for about $106.9K USD. In fact, the auction ended a few days ago, reaching a value of 38.6159 ETH.

The Eiffel Tower NFT was a package of 60 OVRLands and it was on sale on Opensea for only a couple of days.

The investor (AKA Camembert) who won the auction of Eiffel Tower is already known in the NFT world, as he’s already bought another famous non fungible token, the one of Cristiano Ronaldo sold by Sorare for $290,000.

“I am very excited about my new NFT acquisition on OVR. I also recently bought some unique football cards such as Cristiano Ronaldo or Zinedine Zidane but this one is very special : Eiffel Tower is a powerful and distinctive symbol of France. Today it welcomes almost 7 million visitors a year making it the most visited monument in the world. I will allow developers to launch virtual projects on the Eiffel Tower, we could organize digital exhibitions for artists or even invite famous DJ such as David Guetta and organize amazing parties. We could even organize concerts. Companies will also be allowed to advertise on the monument. Whereas there are so many limits in Covid world, everything is possible in a digital world!”.

Italian company OVR has divided the globe into 1.6 trillion hexagons called OVRLand, which are NFTs. Owners can create their own virtual worlds on these virtual lands, adding content like on web pages that can be viewed in augmented reality using the OVR app (available on both Android and iOS).

This way, OVR put the Eiffel Tower up for sale, tokenized among the 1.6 trillion hexagons. Who now owns the Eiffel Tower can use this OVRLands to add his own content on that virtual land, that can be potentially seen by thousands of people as the Eiffel Tower is one of the most iconic monuments in Europe.

Overall, the OVR project has sold over 240,000 NFTs of its OVRLand in just 4 months since its launch and the app is getting more than 5000 visitors per day.