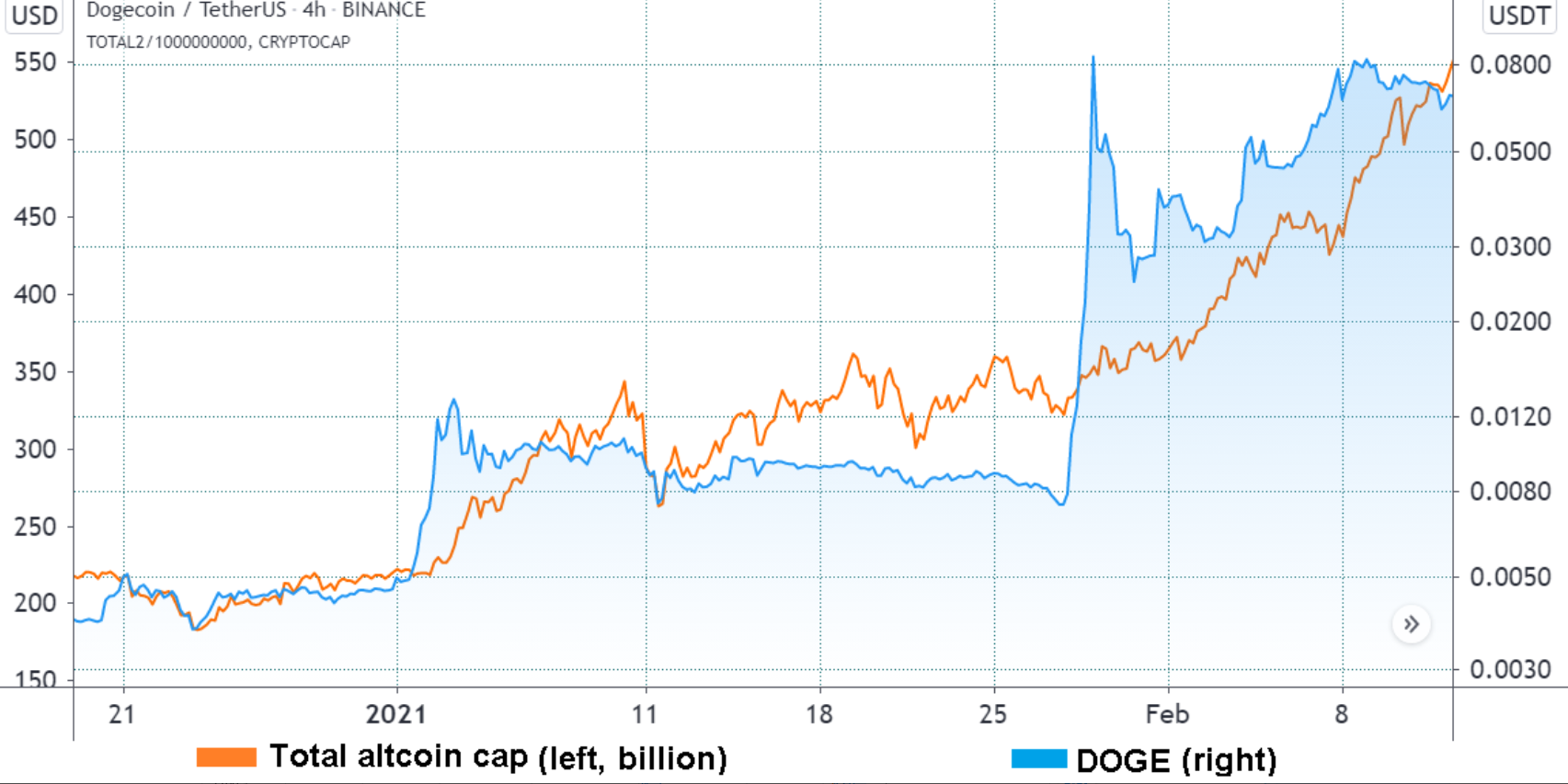 Since its debut in 2013, Dogecoin has continued to grow as the poster child of altcoins. As it gained popularity, it quickly became synonymous with wild price pumps because of its small value and concentrated holdings.

According to Coin Metrics, the price of Dogecoin increased by approximately 40% on Tuesday. After bitcoin, Ethereum, and Binance Coin, Dogecoin now has a market cap of $69 billion, rendering it the fourth-largest cryptocurrency.

The unprecedented rise in the price of the coin has caused some investors and analysts to say that the short-term rallies are strong indicators of the alt Season.

Doge starts altseason by the way in case you’ve forgot.

However, this is most likely correct. After all, Dogecoin is a meme-based cryptocurrency. Over the last few years, there has been little development operation, and few of its users run a complete node. There have been 16 weekly performances higher than 30% and six of those presented 100% or higher gains.

Looking at the chart, the price increase of the coin is the norm. At the end of April, Tesla CEO Elon Musk tweeted: “The Dogefather SNL May 8,” referencing both the coin and his upcoming appearance hosting “Saturday Night Live.” Musk has said that his tweets about dogecoin are meant to be jokes.

At the same time, Mark Cuban, owner of the Dallas Mavericks basketball team, also made several posts in support of dogecoin.

“As long as more companies take doge for products/services, then Doge can be a usable currency because it MAY hold its purchasing value better than a $ in your bank,” Cuban said in a May 2 tweet. “If interest rates skyrocket or the amount spent falls or stagnates, so will Doge. Yes, a joke is now legit.”

The top 693 addresses already control 79.2 percent of all DOGE in circulation. Elon Musk has been vocal in his criticism of this astounding figure. It’s worth noting that the most recent price spikes have been specifically attributed to Musk’s Dogecoin-related memes and tweets.

To argue that Dogecoin is an indicator of altcoin season, proof of such pumps must exist prior to the broader market’s positive results.

DOGE gained 73 percent in less than 36 hours on July 7, 2020. Although the impact only lasted three days, altcoins began to appreciate in value a few weeks later. The market capitalization of altcoins increased by 24% in just ten days, from $105 billion to $130 billion.

In early-2021 incredible, an additional 182% DOGE pump that took place over the course of two days did signal an altseason. Some 36 hours later, the altcoin market cap initiated a 50% rally, boosting it to $340 billion. What was incredible about the first quarter was that on January 18, as the meme-coin hiked over 1,000%. Three days later, the altcoin market cap started a 60% rally to $560 billion.

Before concluding that the meme-driven coin is essentially a strong predictor for alt season, it’s worth noting that such results should be compared to those of other big altcoins. If Dogecoin lives up to its reputation amid a barrage of supportive press, the latest $0.61 all-time high is a sign of altcoin momentum to come.

Related article | Dogecoin (DOGE) Beats Bitcoin, Why It Could Test $0.5