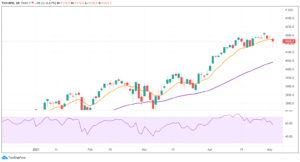 A brief panic episode following a statement by Janet Yellen caused the markets to close the day with red candles all over the place.

In a videoconference with The Atlantic, Janet Yellen, the U.S. Treasury Secretary, signaled that Joe Biden’s administration may be aiming to raise interest rates as a way to save the economy after the imbalance caused by measures to combat the Coronavirus pandemic.

A *Not So* Good Idea

When asked about what actions would be on the table to stimulate the economy in the aftermath of the crisis, Yellen explained that they were considering reallocating some investment and changing some policies, adding that interest rates could rise soon. She was, however, emphatic in pointing out that any change would be modest.

It may be that interest rates will have to rise somewhat to make sure that our economy doesn’t overeat, even though the additional spending is relatively small relative to the size of the economy. So it could cause some very modest increases and interest rates to get that reallocation. But these are investments our economy needs to be competitive and productive.

Generally, when interest rates go up, investments in fixed income products become more attractive. In addition, they tend to absorb more capital from people moving out of alternative assets such as gold or cryptocurrencies because of their low volatility.

Bitcoin and Other Markets Dump After Yellen’s Statements

Reactions to Yellen’s words did not take long to follow. The cryptocurrency market fell from nearly $2.3 trillion to $2.1 trillion in two hours. After a slight recovery, it is currently in the $2.2 trillion zone.

Bitcoin dropped back below $55K, losing $3500 in 6 hours, putting it once again below the 50-period EMA —which could signal bull fatigue— and canceling out the gains of the last 5 days.

The rest of the markets didn’t take the news gracefully either.

The S&P 500 quickly dropped more than 1.3%, but was able to recovery a little bit, closing the day with a red candle of 0.67%. This would be the first time since March 25 that the index closes below the EMA50. Tomorrow wil be key to determine whether the index goes sideways or this was just a panic attack.

The Dow Jones also dropped 1.31% during the day, but was able to recovery and close with a 0.06% increase in the last 24 hours, showing that this could be nothing but an overreaction from the markets.