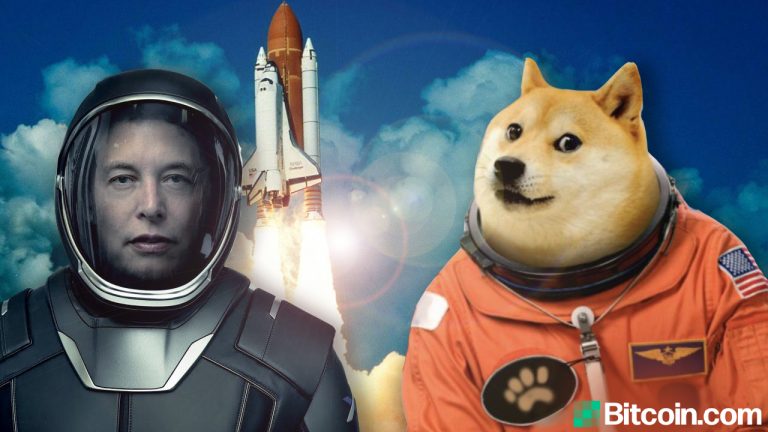 The infamous meme-crypto dogecoin has seen double-digit gains in recent days after Tesla’s Elon Musk tweeted about his upcoming Saturday Night Live appearance on May 8. On Wednesday, Musk tweeted “The Dogefather SNL May 8,” and a great number of people assume dogecoin will be mentioned to some degree on the show.

This weekend, dogecoin (DOGE) has started to surge again, as the token featuring the likeness of the Shiba Inu dog is nearing the asset’s all-time high (ATH). The last dogecoin ATH was two weeks ago when the cryptocurrency reached $0.44 per token.

DOGE has jumped more than 45% during the last seven days, and 30-day stats show dogecoin gained 537.92% against the U.S. dollar. In recent times, Federal Reserve Chair Jerome Powell was asked about dogecoin at a press conference, and Shark Tank star Mark Cuban talked about DOGE with Ellen Degeneres.

Just before the weekend, Tesla’s Elon Musk, who tweets about dogecoin often, mentioned his upcoming SNL appearance scheduled for May 8. In fact, Musk has been fielding Twitter for ideas for certain skits he could do on the show.

A few days prior on April 28, the Tesla executive tweeted “The Dogefather SNL May 8,” which could be a reference to an upcoming DOGE mention on the show. Close to 10,000 people quoted Musk’s tweet on Twitter, it was retweeted more than 72,000 times and has over 422,000 likes at the time of writing.

A great number of people replied to Musk’s tweet that day. “Your words give life and energy to dogecoin,” one woman from India wrote. “I have invested 5k Indian rupees in doge. Bought at 27 INR. Just 184 doge coins. Now in a little dip. This 5k is very very small for big investors. But it’s hard earned money for me,” she added.

Queries for Dogecoin Reach the Highest Score on Google Trends

Of course, members of the Shibe Army helped fuel the dogecoin (DOGE) trends on Twitter as well. “Elon Musk is bringing Scooby Snacks to SNL. I suppose I’ll give in and get a small bag of DOGE,” one individual said.

“Thank you #Dogefather,” another person tweeted. “You made me make back what I lost. Wishing you guys hit that dollar mark.”

Meanwhile, on Google Trends (GT) worldwide statistics, the term “dogecoin” recently tapped a score of 100, which is the highest a search query can get on GT.

Now the term “dogecoin” captured that score on the week of April 11 through the 17th. However, from April 18 to the 24th, the term dipped under the 100 mark to 99 and the platform forecasts an upcoming trend dip. On Saturday evening, the overall dogecoin (DOGE) economy officially captured a $50 billion market valuation.