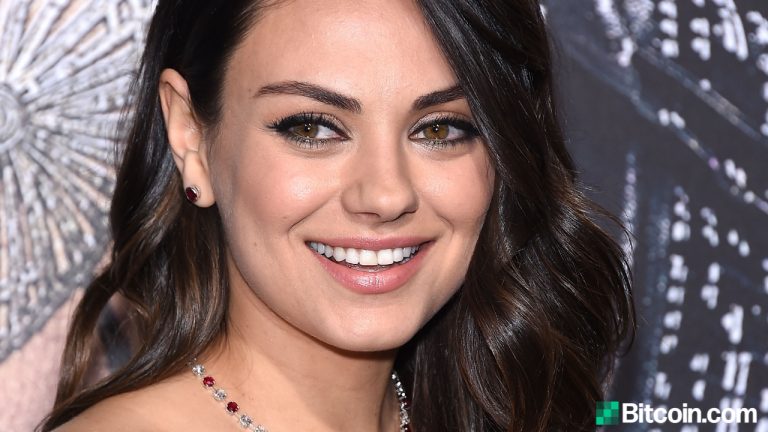 Actress Mila Kunis has revealed that she and her husband, Ashton Kutcher, started investing in bitcoin more than eight years ago. She initially thought that investing in bitcoin was “a horrible idea.” However, now she is using cryptocurrencies and said she has never been happier to be wrong.

Mila Kunis Is Happy to Be Wrong About Bitcoin

Famous film and TV actress Mila Kunis, who is married to actor Ashton Kutcher, talked about bitcoin on The Late Show with Stephen Colbert on Thursday.

She explained that before making an investment, Kutcher would run them by her. “The best part about him is he is really smart about including me in everything and making sure that I am aware of everything that is happening,” Kunis shared. She started dating Kutcher in 2012 and the pair married in July 2015. “He is also really smart at knowing that, sometimes, you shouldn’t listen to your wife,” she opined.

“Early into our dating, two things came up,” Kunis described. They were Uber and Bitcoin. After listening to him explaining that Uber is “like a cab company but anybody can drive the cab,” Kunis said, “That’s the worst idea ever.” When he asked her to try the service out, she panicked. “I was like, ‘You’re going to put me in a car with a stranger? What is wrong with you?’ I was furious at him,” she recalled.

When he pitched the idea of bitcoin to her, Kunis said: “He sat me down and was like, ‘Hey, babe, I got to explain this thing to you, tell me if I’m crazy.’ He’s like, ‘There’s this thing, it’s like mining for money. It’s called cryptocurrency. And there’s this company’— this is eight-plus years ago — ‘It’s called Bitcoin.’” She continued:

I was like, ‘Well, I think this is a horrible idea,’ and he went, ‘Cool, we’re investing in it.’ So, he didn’t listen to me. I mean, this happens all the time.

The actress confirmed that she and Kutcher went into bitcoin more than eight years ago, admitting that initially, she was concerned that bitcoin was not FDIC-insured even though Kutcher tried to convince her that was the point.

She further shared that Kutcher would talk about what seemed “so ludicrous” to her. For example, she said, “Why would I want to sleep on someone’s couch and pay for it?” exclaiming:

It’s ludicrous and yet here we are. And, I Airbnb everything, I Uber everywhere, and I use cryptocurrencies. So guess what, I’ve never been happier to be wrong.

What do you think about Mila Kunis’ comments about bitcoin and cryptocurrencies? Let us know in the comments section below.