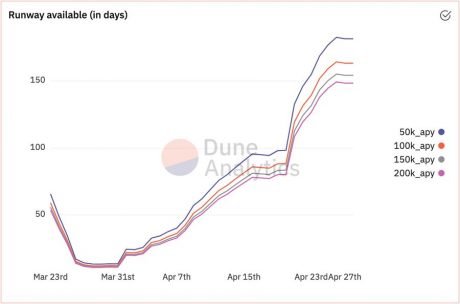 In only three weeks OlympusDAO native token OHM has gone from $812 to $1639, at the time of writing. In the 30-day chart, the token has a 74.2% profit and a 55% profit in the 7-day chart. The protocol’s fundamental continues growing at an impressive pace and could yield further gains.

Data shared by the OlympusDAO revealed an increase in the number of OHM holders. Under 1,000 at the end of March 2021, this metric has more than double in April and stands at 3,300. In the past 30 days, OHM holders have been growing exponentially.

The team also shows an increase in the Risk-Free Value of Treasury Assets metric, used to measure the minimum value of OlympusDAO assets. As the team said, “no matter where the price hoes; this goes flat or up”. The metric stands at 2,807,363 DAI, at the time of writing and has gone parabolic since April 21st.

The Market Value of Treasury Assets, related to OHM’s price performance, stands at $25,147,490 million and has seen similar growth in the last month. 90% of OHM’s supply, as the team said, has been consistently staked with the “3,3” as the dominant investment strategy.

In consequence, the protocols Total Value Locked (TVL) has increased after a dropped at the end of March. Since then, the metric rose with the last week seen the fastest growing. OlympusDAO registered $150 million in TVL. The team said the following on potential rewards for investors:

Things don’t look like they will let up for those stakers any time soon; OHM waiting to be distributed to stakers is now 20x more than OHM staked, securing >50,000% APY for the next six months at least.

OlympusDAO Liquidity On The Rise

Additional data points towards a liquidity accumulation on the protocol. The pool for trading pairs DAI/OHM and OHM/DAI have surged and gone from $3 million at the protocol’s launch to $28 million, at the time of writing. 83% of the pool’s liquidity is treasury owned, as the Team clarified. They added the following:

This ownership is to the point that external LPs should feel quite comfortable deploying into the pool. A significant risk on the part of a liquidity provider is that everyone else to pulls and they end up holding the bag. This risk is minimized significantly when the protocol holds a majority share.

Created as an algorithmic currency protocol, OlympusDAO has created a mechanism that employs asset backing as a supply constraint. Their native token OHM is minted by the liquidity provided in DAI or OHM-DAI LP send to the protocol. As anonymous user “Shadow” explained, the protocol has been designed to protect its investors:

OlympusDAO preserves your purchasing power by rebasing your staked OHM. Rebasing is nothing other than minting new OHM which is paid to the stakers. The rebase is shown as a % increase of the staked OHM per epoch (8h). The APY is just the auto-compounded rebase over a year.