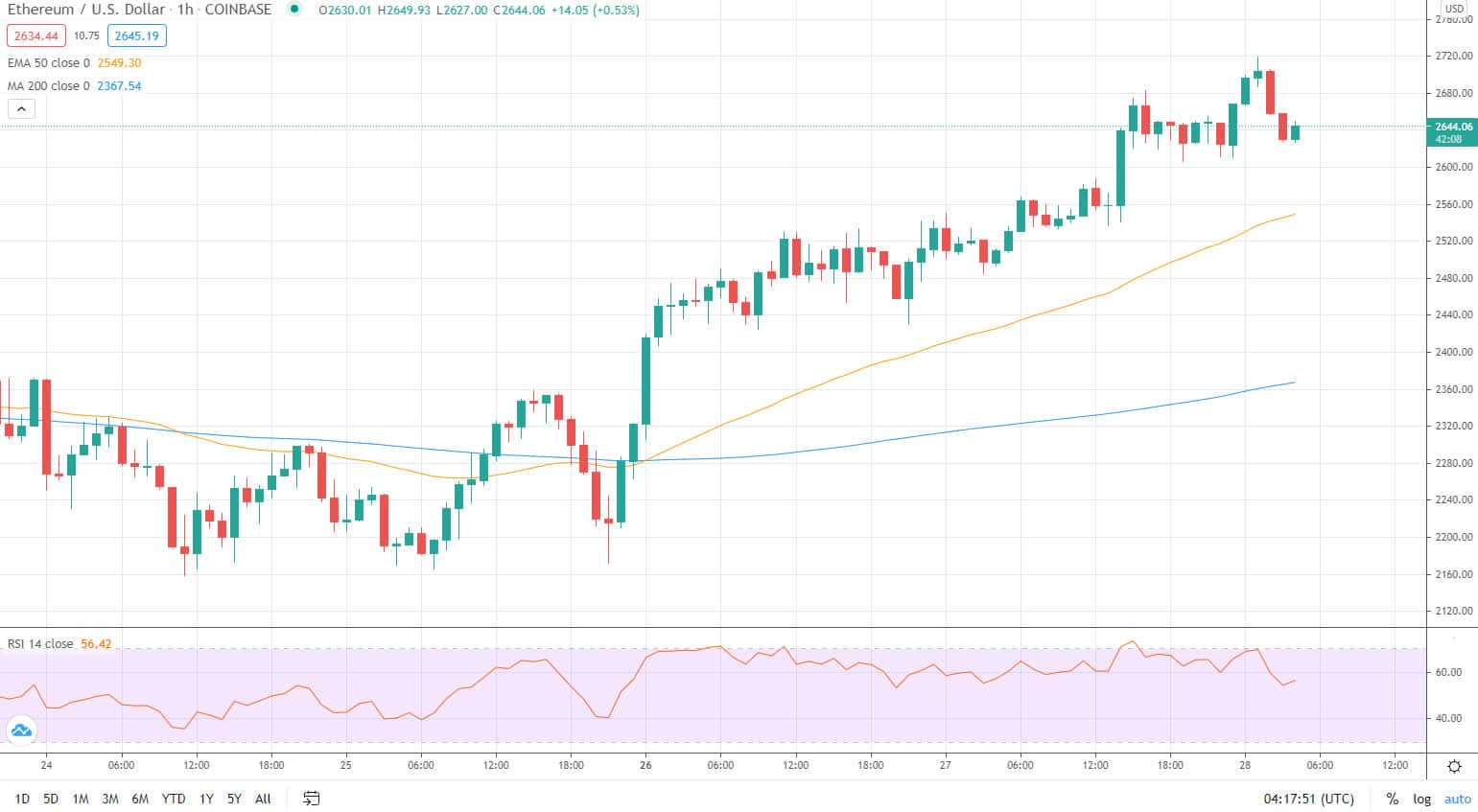 ETH prices topped $2,700 briefly during early trading in Asia on April 28 building upon momentum from the previous day’s trading session.

The move added 7% on the day to the price of Ethereum which has since pulled back to the $2,640 level according to Tradingview.

The new high has pushed Ethereum’s market capitalization over $310 billion which puts it on a par with PayPal according to CompaniesMarketCap.

Since the beginning of 2021, ETH has gained 258% to current prices whereas Bitcoin by comparison has made just 90% to its current price of $55K.

Banks and DeFi Drivers for Ethereum

The momentum for the latest push has come from an announcement from the European Investment Bank which plans to launch a digital bond sale on the Ethereum network.

The two-year 100 million Euro, or approximately $121 million USD, digital bond will be issued in a sale led by Goldman Sachs, Banco Santander, and Societe Generale according to a Bloomberg report.

The big bank backing has given Ethereum a boost but it is not the only thing driving momentum at the moment. As reported by CryptoPotato, decentralized finance is also a big factor as the Ethereum DeFi ecosystem hit a record 2 million users.

Other bullish on-chain factors include a decline in the amount of ETH being held on exchanges which indicates that holders are not preparing to sell. That Ethereum is being channeled into better-earning portals such as DeFi which now has a record 11 million ETH locked up according to Defipulse. This is equivalent to $29 billion at current prices.

Needless to say, there is a lot of bullishness on crypto twitter regarding Ethereum this morning with Messari researcher Ryan Watkins commenting on the sheer scale and ambition of the network:

“If Ethereum is successful, it’s economy may eventually grow so large its GDP surpasses that of the leading nation states. This would change everything we know about economics and politics.”

Bitcoin has managed a smaller gain of 2.7% on the day to reach resistance at $55K but Binance Coin has equaled Ethereum’s 7% gain with a push to $562 at the time of press according to CoinGecko.

Other big gainers in the world of altcoins over the past day include Cardano, Uniswap, Bitcoin Cash, and VeChain.