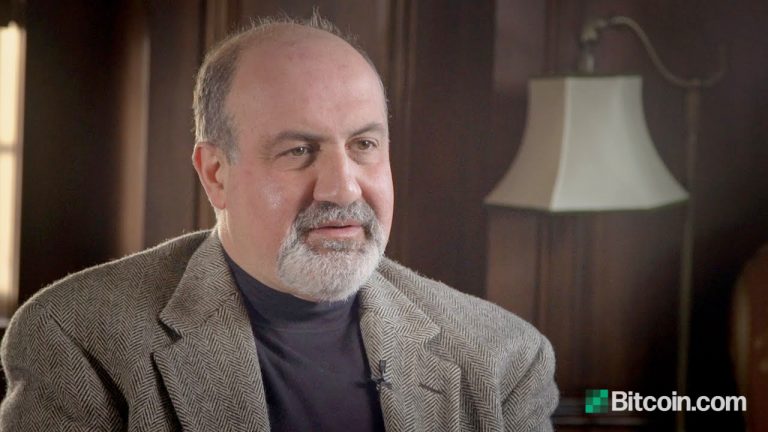 The famous author of The Black Swan, Nassim Nicholas Taleb, says investors should not buy bitcoin. To hedge against the current turbulent market, he advises buying stocks or real estate, emphasizing that bitcoin has no connection to inflation or “anything economic.”

Nassim Nicholas Taleb, the famed author of “The Black Swan,” has shared his view on bitcoin and on how to hedge against the current turbulent market in an interview with CNBC Friday. Taleb is a Lebanese-American scholar, mathematical statistician, former options trader, and risk analyst.

He was asked about cryptocurrency, particularly bitcoin, given that investors have been increasingly restructuring their portfolios with this asset class. Regarding bitcoin, “It has the characteristics of an open Ponzi scheme. Everyone knows it’s a Ponzi,” he claims, adding:

Admitting that bitcoin is “a beautifully set up cryptographic system,” Taleb insisted that “It’s well-made but there is absolutely no reason it should be linked to anything economic.”

“If you want to hedge against inflation, buy a piece of land,” he advised, adding that one can “grow olives on it. You’ll have olive oil.” He continued, “Of course, the best strategy for investors is to own things that produce yields in the future.”

While a number of analysts support Taleb’s theory that bitcoin is not an inflation hedge, some believe otherwise. Investment bank Goldman Sachs said in December last year that “bitcoin is the retail inflation hedge,” noting that it “is replacing gold as the inflation hedge of choice.” British investment management firm Ruffer wrote that bitcoin “acts as a hedge to some of the monetary and market risks that we see.” Deutsche Bank observed that there “seems to be an increasing demand to use bitcoin where gold used to be used to hedge dollar risk, inflation, and other things.”

Concluding Friday’s interview on how to hedge risk in today’s market, Taleb said:

Stay out of bitcoin. Buy stocks that are stable and buy things you understand.

He also reiterated that investors can also “Buy a piece of land” and grow something on it, like in his earlier olive example.

The famous author was initially a bitcoin proponent, believing that BTC can be used as a currency. However, when he saw that the price of bitcoin is very volatile and investors are using the cryptocurrency as a vehicle for speculation, he started selling off his bitcoin and began calling it a failed currency.

What do you think about Nassim Taleb’s advice about bitcoin? Let us know in the comments section below.