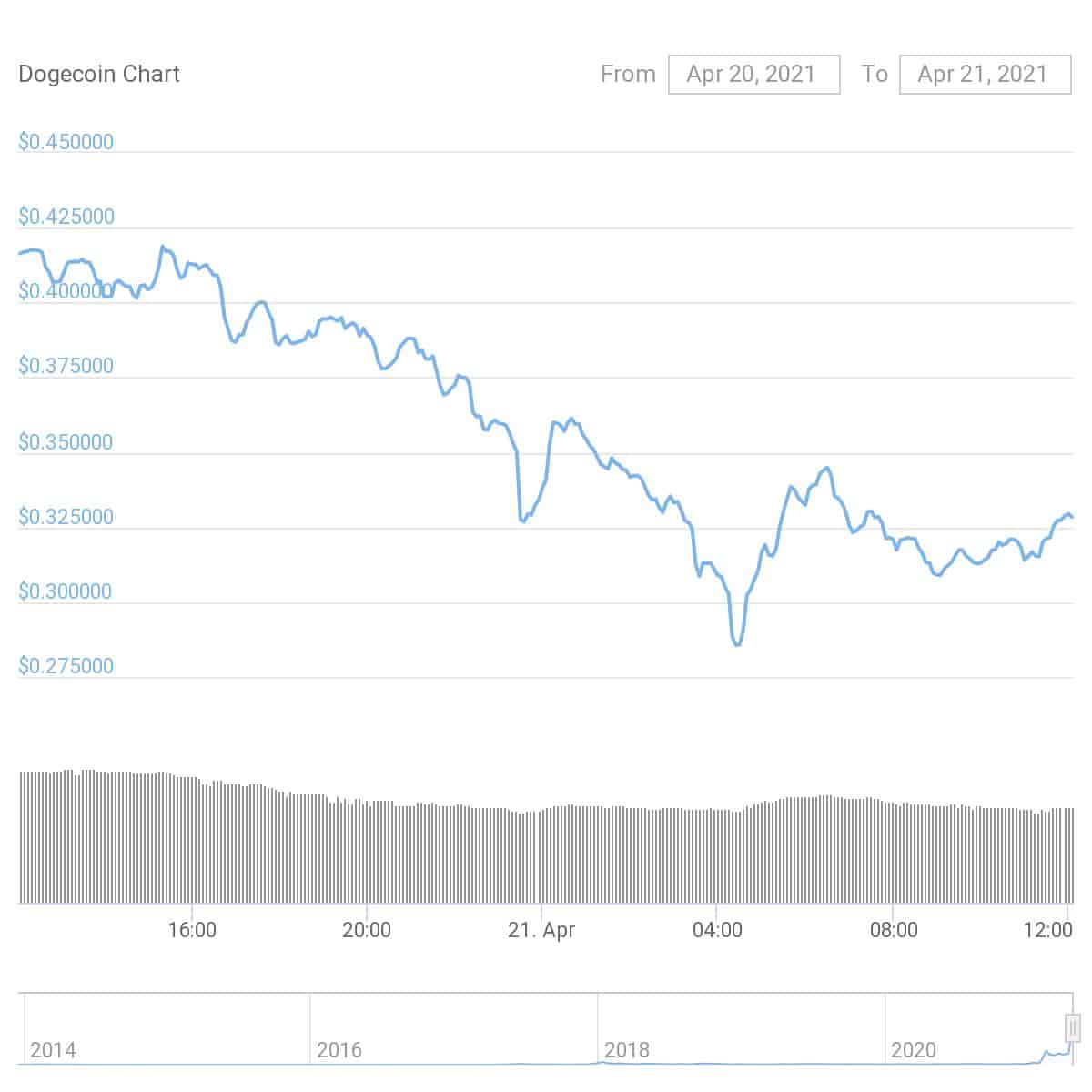 Granted, Dogecoin did crank to an all-time high yesterday hitting $0.418 for the first time ever as fans pumped the meme-flavored token amid a flurry of hysteria.

However, since that giddy peak DOGE slumped almost 32% to hit an intraday low of $0.285 in early trading on Wednesday, April 21 according to Coingecko.

Since then, the token has managed to recover slightly to trade at $0.340 at the time of writing. The big dump was inevitable following the token’s hype-fuelled pump of 250% over the past week.

DOGE is currently holding sixth in the market cap charts with $43 billion according to Coingecko.

As reported by CryptoPotato, April 20 was designated ‘DOGE Day’ following the initiation of DOGE-themed campaigns by community members on Twitter and Reddit. The trend spread outside of crypto circles and even confectionary brands Snickers and Milky Way joined the craze.

There has also been no shortage of surreptitious comments from Elon Musk over the past year which has added to the token’s momentum and speculator properties.

DOGE Day has been so large that mainstream media even picked it up with CNBC reporting that the joke coin has made “out of this world gains this year”.

According to CNBC, crypto bull and Galaxy Digital CEO Mike Novogratz stated that Dogecoin speaks to a lot of the same movement GME did. In late January Reddit group, ‘wallstreetbets’ pumped the GameStop stock off the chart as a buying frenzy mounted.

“There is a crazy excitement around very young investors around meme coins and meme ideas. It’s shocking to me $GME continues to hold any value.”

The goal among those pumping DOGE was to get it to a dollar, however, they fell short by $0.58.

Crypto trader KALEO predicted the massive pump and dump for DOGE but profited handsomely from the hype and FOMO.

Won’t lie – the “DOGE day” thing tomorrow is cool and all, but it gives me the same type vibes as XRP did back in late January. I was up huge leading up to the supposed pump, but got way too caught up in the hype and held holding for a huge loss.

DOGE is currently holding sixth in the market cap charts with $43 billion according to Coingecko. This puts the token that was created as a joke above solid real-world blockchain networks Cardano and Polkadot.

Crypto influencer ‘Ivy’ summed up some of the recent events in a tweet on the now infamous day: