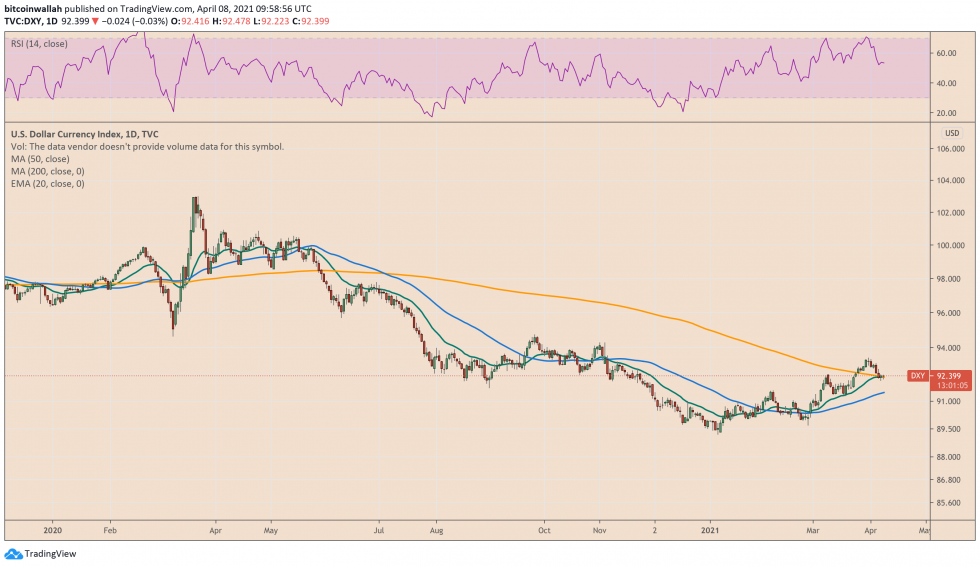 Bitcoin and the US dollar have stopped caring about their inverse correlation heading into 2021.

The flagship cryptocurrency closed the first quarter more than 100 percent higher as more and more institutions became accustomed to its safe-haven characteristics. For instance, US carmaker Tesla revealed that it replaced $1.5 billion of its cash reserves with bitcoin, stating that it considers the cryptocurrency as a store-of-value.

That was a clear example showing how a big firm chooses bitcoin over the dollar, especially under the impression that the latter would lose its value against other fiat currencies after closing the previous year down 6.80 percent. The analogy itself followed a flurry of sell-side predictions for the dollar, making Bitcoin an emerging safe-haven alternative, an attractive asset for investors.

But the strong consensus over a weakening dollar started crackling in 2021.

The US dollar index…

….which tracks the greenback’s value against six other major currencies, climbed 3.6 percent in the first quarter.

US dollar index rebounds 3.43 percent from its sessional low. Source: DXY on TradingView.com

It later pulled back by 1 percent, maintaining its yearly upside bias. The index rose primarily because of underperforming foreign currencies, coupled with a sharp rise in inflation expectations in the US, starred by President Joe Biden’s $1.9 trillion stimulus package.

The uptick prompted a sharp sell-off in the bond market. In turn, that pushed the yields higher, raising the government debts’ appeal among foreign investors, especially in Japan, whose yen fell 7.5 percent against the dollar in the first quarter. Nevertheless, many macroeconomic analysts remained convinced that the dollar would decline.

Zach Pandl, co-head of global foreign exchange, interest rates, and emerging markets strategy at Goldman Sachs, reiterated their earlier stance about a weaker dollar, saying a rebound in the euro would drive the greenback lower.

“I do have some concerns about the very near-term outlook . . . [but] we have stuck with the bearish view because I ultimately think that the dollar is more likely to weaken over the next few months,” he told the Financial Times.

Citi analyst Calvin Tse, who predicted a 20 percent crash for the US dollar index in 2021, also stuck to his bearish call, saying that the long-term outlook for the greenback has not changed. He noted that all the existing bullish factors that drove the yields higher — faster vaccine rollouts, global trade recovery, higher commodity prices — would still prove bearish for the dollar.

On the other hand, Bitcoin rallied from $20,000 in December 2020 to a little over $61,000 as in March 2021, showing that it remains a hot asset among hyperinflation conspirationalists.

One of the main reasons Bitcoin may have withstood a stronger dollar is foreign demand itself. Just recently, exchanges in South Korea reported trading volumes higher than what global crypto platform Binance processes. Other parts of the world, including Turkey and Nigeria, also saw a spike in demand for bitcoin and other cryptocurrency assets against weaker local currencies.

So it appears, Bitcoin emerged as a safe-haven also against wild cyclical trades between the dollar and other fiats. This year’s uncertain forex outlook further makes the cryptocurrency a safer destination to park, especially for corporates with excessive exposure to cash in their balance sheets.

Photo by Bermix Studio on Unsplash