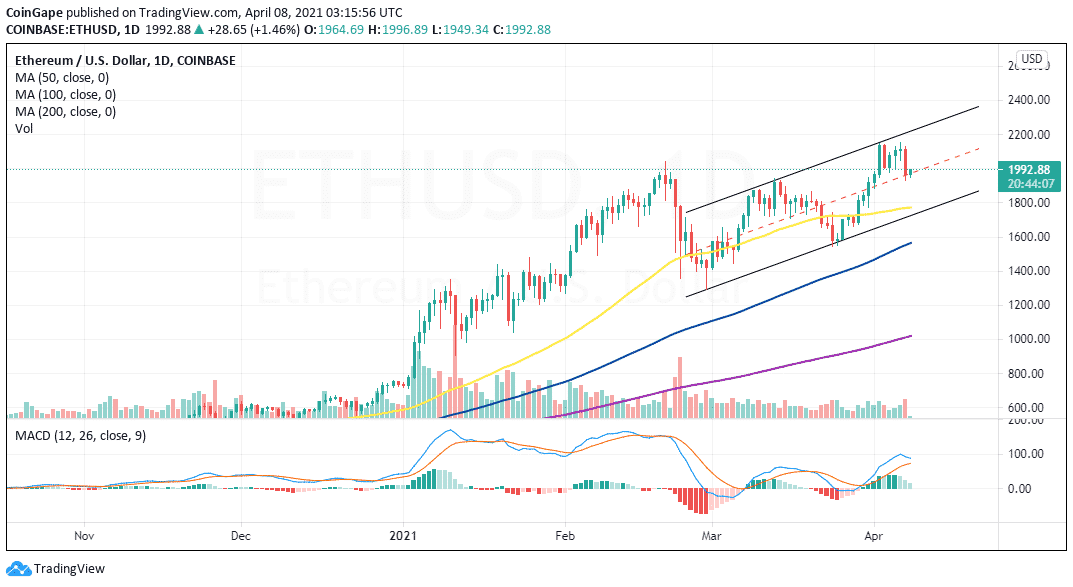 Ethereum has been on an upward role since the beginning of March, as observed on the daily chart. The pioneer altcoin rose from the lows traded at $1,292 toward the end of February and reclaimed the position above $2,000 in April’s first week.

A new record high was also achieved at $2,146 (on Coinbase) before the correction on Wednesday came into the picture. Attempts to defend the support at $2,000 were thwarted by increased overhead pressure, which affected most digital assets, including Bitcoin. The flagship cryptocurrency extended the bearish leg to $56,000 before finding stability.

At the time of writing, Ether teeters at $1,987 while holding onto the immediate support provided by the ascending channel’s middle boundary on the daily chart. If this support remains intact, Ether will likely gain market stability, allowing bulls to focus on stepping above $2,000.

The least resistance path appears upward based on the applied moving averages. The 50-day Simple Moving Average (SMA) maintains a gap above the longer-term 100 SMA and the 200 SMA to show that the trend still favors the bulls.

On the downside, it is worth mentioning that the Moving Average Convergence Divergence (MACD) has a bearish impulse. This shows that the expected uptrend is in jeopardy and ETH may resume the downtrend, especially if the MACD line crosses under the signal line. Other support levels have been highlighted at $1,800 and $1,600 if declines extend.