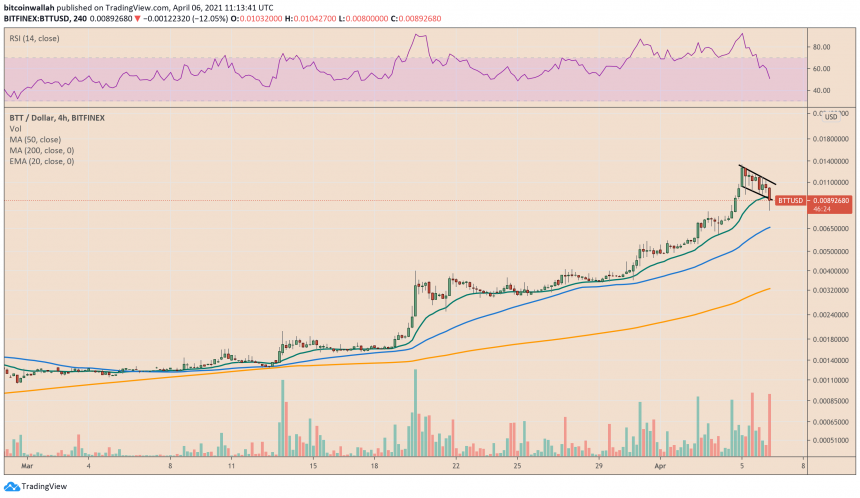 Traders who bought BitTorrent at its top, believing that the Justin Sun-backed token would keep on pumping, are now facing huge intraday losses.

The BTT/USD exchange rate crashed by more than 40 percent after setting up a record high of $0.0134, questioning catalysts that prompted BitTorrent’s explosive upside move in the first place. Earlier, NewsBTC has raised alarms about an absence of concrete fundamental factors that should have been backing the BTT’s price rally. Excerpts:

“Traders might unload a portion of their BTT holdings to secure maximum profits. That could push the token towards its next downside target that lurks near its 20-4H exponential moving average (the green wave). If profit-taking intensifies, BTT will fall towards the blue wave target — the 50-4H simple moving average. That would wipe out almost most of the BTT’s 2021 profits.”

Except, one factor, the so-called altcoin season, or altseason, attempted to justify BTT’s gains to a certain degree. Altseasons point to a growth in digital assets that rival the top cryptocurrency, Bitcoin. BitTorrent, an alternative cryptocurrency, gained almost in sync with other altcoins, including Ethereum, Binance Coin, Litecoin, XRP, and others, indicating that bulls were merely riding the upside craze.

BitTorrent’s downside correction did little in offsetting its long-term bullish bias. The BTT/USD exchange rate was still up more than 3,000 percent on a year-to-date timeframe. While that made the pair extremely overvalued — according to its one-day Relative Strength Indicator readings, the ongoing craze in the altcoin market indicated that it would find sessional support in the short term.

The BitTorrent official Twitter channel attempted to underscore the BTT’s bullish bias by announcing a flurry of development updates. It noted that the BitTorrent File System would increase network decentralization by guarding testing on both client and server ends.

What now appears possible is that BitTorrent finds support either in its 20-4H moving average or its 50-4H moving average. If the token manages to sustain above those levels, its possibility of bouncing back will remain higher. Else, it would risk falling to near $0.001, the Feb-March support level.