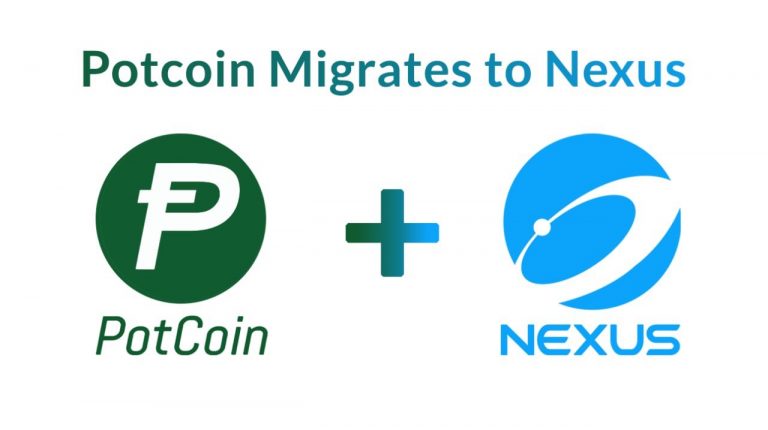 PRESS RELEASE. PotCoin (Ᵽ) is migrating over from their legacy blockchain to Nexus (NXS). PotCoin has made Nexus their platform of choice, with the confidence that together they will best serve the growing cannabis industry. The recreational and medical cannabis market in North America already accounts for roughly $17.7 billion in 2021 and is forecast to reach 47.3 billion by 2027 [1], an estimated 44% annual increase. As cannabis continues to be decriminalized and legalized around the world, the potential for economic growth is exponential. After much consideration, PotCoin recognized Nexus as being the best suited platform to support their ambitions in this rapidly growing industry.

“With the huge growth predictions for the industry, we required a platform that could handle future transaction volume. A scalable architecture, DApp development through APIs, the replacement of static private keys with One-Time Signatures (OTS), and use of leading post quantum cryptography were all driving factors in our decision to migrate to Nexus. The $POT community is extremely excited and appreciates the warm welcoming from Nexus. With this partnership and the fantastic tech that is now available to us, we are fully prepared to build out solutions that will change the future of the cannabis industry!” – Josh Inthecity

The migration will take place through a decentralized swap module built for Bitcoin based coins. At which point the PotCoin community will enjoy free transactions using $POT as it was originally intended: a currency for the cannabis industry. The $POT team plans to extend the use of tokens as incentives to dispensaries and as customer rewards.

Future DApp development for $POT includes supply chain management, to verify certification standards and quality assurances, from seed to sale (S2S). The technology will be built with Nexus Assets and Tokens which are easily configurable through the Nexus API. Assets are a data storage system that can maintain an immutable record and history of any digital item, including its current and previous states. By design, the transfer and claiming of an Asset between blockchain accounts (SigChains) provides a history of a chain of custody, and any modifications to the Asset. Tokens on the other hand, can provide fungible representation of batches of goods, such as a recent harvest. Therefore, the Nexus platform is able to record supply chain data without having to maintain a complex state and history in a single contract as do other blockchain technologies. Naturally, the DApp will replace existing S2S tracking systems such as MJ Freeway, which currently has maintained monopolies in states such as Utah [2].

Founded in 2014, PotCoin (Ᵽ) was the first cryptocurrency designed to provide financial services for the cannabis industry, which at the time was considered unserviceable by traditional banking. PotCoin, like Nexus, is a community-driven project, operating as a decentralized organization through which the community ultimately influences the project’s development and direction. PotCoin combines extensive industry knowledge with key partnerships, a committed community and broad marketing reach in their efforts to promote cannabis awareness.

Contracts: Nexus supplies a 64 bit register-based virtual machine as the heart of its smart contract engine. A suite of APIs gives developers access to numerous ready-made contract functionalities. This relieves DApp developers from the burden of learning a smart contract language.

Tokens & Assets (NFT’s): Basic token creation is simple for even non-technical individuals with the Nexus desktop wallet. Arbitrary data can be stored on the Nexus blockchain in the form of assets. Once established, assets can be transferred to other accounts optionally with specified contract conditions.

Ease of Use: Nexus’ SigChains addresses a primary blockchain limitation — private key management. Users can login to their Nexus wallet with a username, password, & PIN, providing access to all accounts, tokens, and assets. This eliminates the need to backup wallet.dat files and manage private keys.

Database: Unlike most other blockchains that rely on Google’s LevelDB or Oracle’s BerkeleyDB for blockchain storage, Nexus has developed the Lower Level Database (LLD) that outperforms most storage engines by orders of magnitude and remains constant time, meaning it doesn’t slow down as you add more data to it.

Security: The Nexus security model uses many layers of redundancy to provide security to the system. The primary methods include using uniquely generated private keys for every transaction (attack window reduction), and the secondary use of Quantum Resistant (QR) cryptography such as FALCON and SABER.