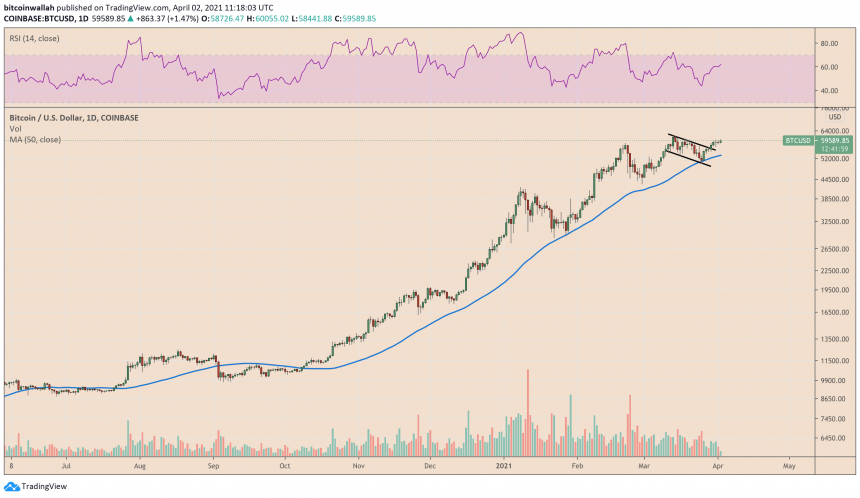 Bitcoin prices climbed above $60,000 for the first time in two weeks, raising prospects that the cryptocurrency would keep rising into the new quarter after closing the previous one almost 100 percent higher.

Nevertheless, analyst Robbie Liu noted that the recent Bitcoin rally has resulted from “overheated retail action.” The OKEx researcher highlighted rising premiums for the quarterly contract BTCUSD0625 that jumped from $3,000, or 5.7 percent, last Friday to its current $5,200, or 8.7 percent. The level was almost the same last month when Bitcoin had established an all-time high above $61,000.

“Following the rise in premiums are the funding rates for perpetual swaps, which began to rise midweek and have now reached over 0.15% per eight hours,” explained Mr. Liu. “These figures are certainly entering a more dangerous range.”

“If the price does not break out to the upside in a short period of time, then traders attempting to chase the rally high with high leverage will have to close their positions, thus putting downward pressure on the price,” he added.

In retrospect, it is spot market trading data showing the ratio between users borrowing USDT versus borrowing BTC in USDT value over a given period of time. This week, it fell from 9.5 to 8.2, which indicated that leveraged spot traders are beginning to unwind their positions after securing profits.

“The current overheated bullish sentiment is already visible in several indicators from OKEx trading data,” added Mr. Liu. “If price cannot break the $60,000 psychological mark quickly, it is likely to form a bearish divergence on the RSI indicator for the four-hour chart, prompting a correction.”

The latest rise in the Bitcoin market indicated stabilization after a strong upside rally earlier this week.

Traders grappled with the prospect of Joe Biden’s new government spending plan worth $2 trillion. They also took cues from PayPal’s decision to add a crypto-checkout option on its legacy platform and Morgan Stanley’s SEC filings that showed the investment banking giant revealing that it might allocate 25 percent of its institutional funds’ portfolios to cash-settled bitcoin futures and Grayscale Bitcoin Trust.

“The ~$57,500 area rejected BTC in February, but it looks like BTC turned this exact same level into support a couple of days ago,” said a pseudonymous market analyst. “Now it’s about follow-through from here. And we’re seeing some follow-through today.”