The Laser Eyes Meme: Not a Coincidence That This Marked a Local Top for Bitcoin (Opinion) 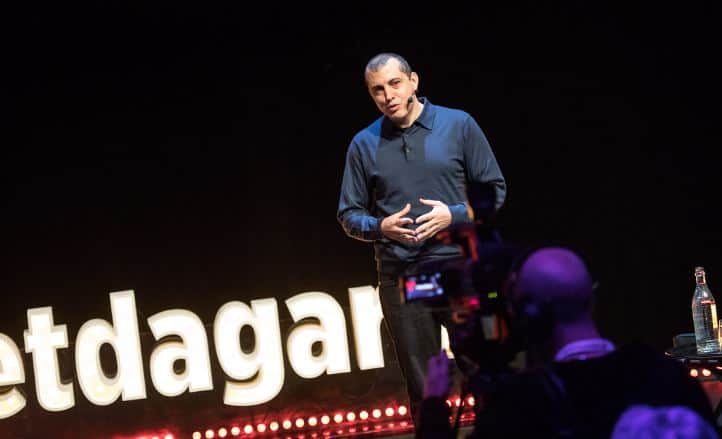 Bitcoin plunged. It lost somewhere around $13k, or 25% in the past couple of days. It’s not alone. The entire crypto market is bleeding.

Data from CoinMarketCap shows that the capitalization lost around $365 billion since Sunday. For reference, last year, on this date, the total market cap of all cryptocurrencies was $283 billion. There’s no sugarcoating it – the crash is substantial, and it might not be over yet.

But what led to it? Well, there’s no telling, but if one thing is for sure, the euphoria is definitely peaking.

Back in 2017, we witnessed a historic bull run that took the prices for many cryptocurrencies to peaks never before seen. Bitcoin peaked at about $20,000 – a number that the entire community will remember, despite the fact that we’re more than twice above it now.

However, the joy was somewhat short-lived. In retrospect, it’s easy to see some of the top signals. Retail investors flooded the market, heavily promoted by mainstream media. At one point, CNBC even did an ‘educational’ bit showing people how to buy Ripple’s XRP.

Guess what price was XRP trading at that time? If you said $2.25 – you were right! That was on January 2nd, 2018, and XRP almost doubled 2 days later before the market took a turn. The price has never been as high since a few days later, and many, MANY people lost their money.

That’s just one example. We saw celebrities starting to publicly endorse initial coin offerings, many of which turned out to be sold entirely illegal.

If you’ve been around since before 2017, and even if you didn’t have any crypto holdings until then, it’s almost 100% guaranteed that you heard about Bitcoin’s epic ascend to $20,000. This was peak euphoria. Everyone was talking about crypto. Everyone.

What followed was a brutal bear market where BTC dropped to a low of around $3K, and most altcoins lost more than 95% of their value. Some of them never recovered. Many of them disappeared completely. People lost a LOT of money.

Fast forward a few years, and the bear market is over. We’re currently in another bull market that is perhaps even more impressive than the last one. Bitcoin marked a new all-time high just a few days ago, and this time, it was almost $60K!

But the market has never been programmed to go “up only.” It corrects. And when BTC sells at $58K a pop, a 20% correction means a five-digit decline. That’s where we are right now.

One good way to measure the retail interest in Bitcoin (and, by extension – the crypto market) is to check out data on Google Trends. The search volume for “bitcoin” doesn’t seem to be anywhere near the peak of 2017.

And yet, I’m sure all of you reading this have received a phone call from your friends, family, or even people you haven’t heard in years asking you about Bitcoin. Euphoria is starting to settle.

Another clear example of peaking euphoria is the #LaserRayUntil100K trend that started a few days ago on Twitter, right when BTC’s price was ascending towards its all-time high.

The trend spread like wildfire. A good representation of its reach would be the fact that Elon Musk did it, as well as the US Senator Cynthia Lumis. Disclaimer – we did it too. Our Potato is now staring at you with its laser eyes on Twitter.

Is there something wrong with this undertaking? Absolutely not! The community is united under a common banner is definitely a positive.

However, perhaps we should unite under something else rather than bitcoin against the USD. I just feel like retail euphoria isn’t exactly where it was in 2017 in terms of regular folks, who are outside of the industry. But it’s definitely here among those of us who’ve been waiting for this bull market for quite some time.

But could that be a signal for a local top? After all, we did see a major correction in Bitcoin’s price, which is down $13k in less than a couple of days. Perhaps. Why, though? Well, there are a few reasons.

The Price Became a Dominating Factor

The truth is, regardless of whether you want to admit it or not, that price is all everyone talks about.

In retrospect, the hardcore Bitcoin community has always been represented by modest people who tend to stay away from the headlights, quietly waiting for their moment.

Crypto Twitter, where a large part of our community is, is dominated by price conversations. Everyone is obsessed with it. Bitcoin’s price suddenly became its measure for success.

In other words, it suddenly started to feel as if euphoria is within all of us. And that’s usually when the market takes its share.

The question remains – was this maximum pain? Well, if we look at history, it probably wasn’t. In 2017 we saw plenty of corrections where the price crashed by more than 30% and the one we saw (are seeing) right now was barely above 20%. But every cycle is different, so it may as well have been.

Don’t get me wrong. I’m not calling a market top here. I’m just saying that the attention seems to spin in a wrong direction. Bitcoin’s worth in USD is as far from its value proposition as it can be.

1 BTC = 1 BTC. Let’s remember this if we’re truly here for it. Perhaps it’s just time to stick to what we all do best- work and build for this space instead of fixating on price.

Breaking news! Bitcoin dropped to a price not seen since 10 days ago. Bull market canceled.

I couldn’t have NOT said this.