The environmental idiocy of Bitcoin investment. 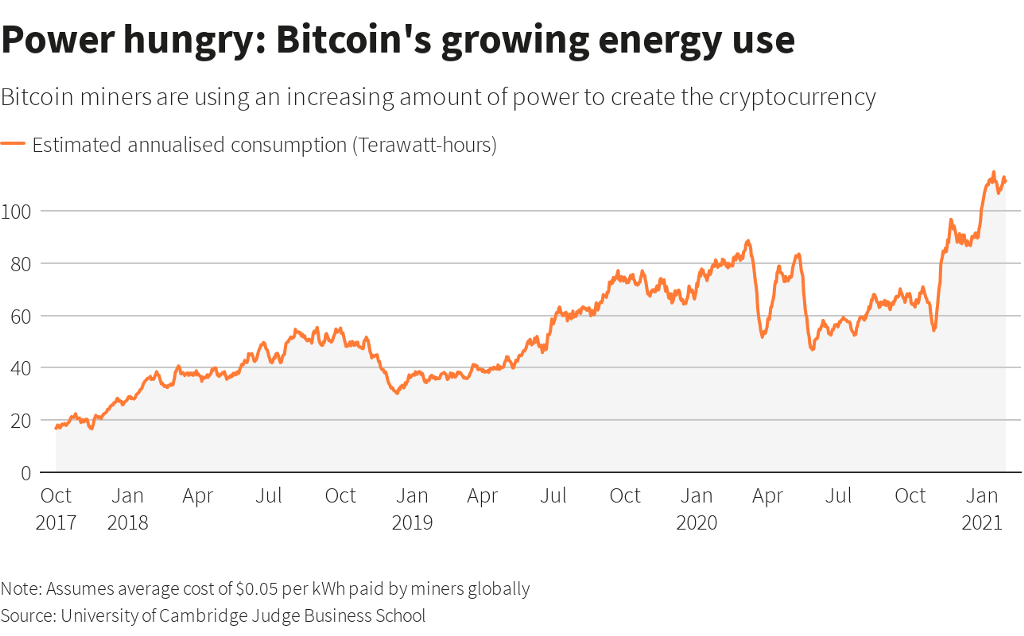 As most are well aware by now, Bitcoin is killing the planet. Tesla is widely derided for their Bitcoin purchase, while whataboutisms from Bitcoin holders are repeatedly shared on Twitter. Despite the whataboutisms claiming Bitcoin incentivises green energy, multiple coal plants reopening for Bitcoin mining (1)(2) seem to disagree with this statement. Bitcoin mining is helping slow down the transition to green alternatives by increasing revenue on gas mining (3)(4). In other countries, miners are getting access to cheap, clean energy, funded by the EU. Great news for the miners, bad news for the locals, the plant was supposed to help (5)(6). All in all, 61% of Bitcoin mining is powered by fossil fuels, famously leading to CO2 emissions equal to that of all 5 million of New Zealand’s inhabitants and leading to many papers concluding, Bitcoin might push us over the brink.

Through all this gloom we may forget that these Bitcoin miners do not necessarily enjoy polluting the planet. Miners mine Bitcoin because they are incentivized to do so, through fees paid and more importantly through mining rewards. These rewards amount to tens of millions of dollars per day. More importantly, these rewards increase linearly with Bitcoin prices (through block rewards) and exponentially with Bitcoin usage (through transaction fees).

Increased rewards lead to further competition for these rewards, meaning additional miners entering, causing more pollution. In other words, every person or institution buying Bitcoin directly contributes to this pollution.

Tesla’s decision to put Bitcoin on its balance sheet pushed Bitcoin’s price up, which made it more profitable for miners to mine Bitcoin, and therefore increased total mining emissions. To make the ridiculousness of Tesla’s decision even more apparent — on average, a single Bitcoin transaction uses as much energy as driving 5000km in a Tesla does.

Right now, this energy waste amounts to the CO2 emitted by New Zealand. If Bitcoin’s price goes to $1 million, it will still only be doing 7 transactions per second while emitting more CO2 than Pakistan, the Netherlands, Argentina, and Nigeria combined.

What can we do to stop this?

A Bitcoin holder would tell you that the solution is in more sustainable sources of electricity. Since Bitcoin can be mined from anywhere in the world, this is hard to enforce. If green energy was the cheapest source of energy overall, many of our problems would already be solved.

Crypto, while keeping our planet liveable

The world is moving from ICE cars to electric cars. We do this because transport is valuable to have and electric cars are becoming an increasingly feasible alternative. Likewise, we can look at what Bitcoin was designed to do and see whether there are alternatives that would function as well or better as a store of value and a decentralised currency.

Ethereum is doing research into a different consensus algorithm that would use far less energy, with implementation planned for approximately 2 years from now. Additionally, Ethereum is slightly more scalable than Bitcoin, though Ethereum is also seeing transaction fees of well above $20.

Bitcoin Green was a different implementation promising to be green but seems to have faded into obscurity with the website https://www.savebitcoin.io/ returning a 404 nowadays.

Nano seems the most promising of the bunch, improving on Bitcoin by offering secure, instant and feeless transactions, while being able to run at many times Bitcoin’s maximum capacity on the energy output of a single wind turbine. It inherently works better as a store of value, and can cut down the CO2 emissions of both Bitcoin and gold mining.

If we want to be serious about fighting the climate crisis, we need to take the easy wins where we see them. Using a cryptocurrency like Nano which is 6 million times more energy-efficient than Bitcoin, or using Ethereum when they’ve finished their redesign, is a no-brainer. We can have non-custodial censorship-resistant global store of value to protect against the devaluation of government currencies while eliminating the CO2 emissions of a medium-sized country.

We can all help here. If you know a business accepting Bitcoin, point them towards these greener, cheaper alternatives. If you hold Bitcoin personally, consider divesting some of it into Nano. If you’re an institutional investor, consider using green crypto such as Nano as a store of value rather than contributing to climate change.

As is the case with the fossil fuel and oil industry, the vested interests in Bitcoin are huge and will do whatever it takes to suppress new technology that would make current solutions obsolete. While miners are bound to their position, I would ask large Bitcoin holders to critically consider their position. If not for the future of the planet, then at least for the value of their own holdings.

The environmental idiocy of Bitcoin investment. was originally published in The Capital on Medium, where people are continuing the conversation by highlighting and responding to this story.