Bill Gates Claims People Investing in Bitcoin Should Watch Out As Bitcoin Price Slumps Below $50,000 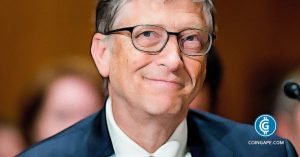 Bill Gates in his recent interview with Bloomberg said he is not bullish on Bitcoin as a commodity and believe people investing in the top cryptocurrency should watch out given the recent price volatility has led to a price crash of over 20% from its all-time high of $58,457 recorded just a couple of days ago.

Gates was responding to a question about Bitcoin’s price volatility and how a tweet from Elon Musk has sent the price up by nearly 10% last month. Gates believes for someone like Elon Musk the price volatility should not matter much, but people following the frenzy and buying into the trend should watch out.

Only a couple of days back when Bitcoin was soaring new all-time-highs, Gates in an interview with CNBC had said that he is neither bullish nor bearish on Bitcoin and maintains a neutral stance. However, the recent price slump seems to have led to a change of mind for Microsoft’s founder.

Tesla stock prices also slumped to a new record low reaching levels lower than its S&P 500 listing price. Elon Musk had also received a lot of flak for his bitcoin investment and tweets that many believe have led to price fluctuation.

$TSLA briefly rallied after announcing its Bitcoin purchase and since then its down 14% pic.twitter.com/NoZes9USm0

Musk had to clarify his stance that his actions are not directly reflective of the company’s stance.

To be clear, I am *not* an investor, I am an engineer. I don’t even own any publicly traded stock besides Tesla.

However, when fiat currency has negative real interest, only a fool wouldn’t look elsewhere.

Bitcoin is almost as bs as fiat money. The key word is “almost”.

Bitcoin price today tumbled below $50,000 registering a new daily low of $45,500 and Musk’s reaction seems to be more based on the current market trends. However, many veteran crypto traders would differ with Gates as a pullback of 20%  in a bull run is considered normal. Bitcoin registered a similar price crash last month after topping $42,000 and crashing to $30,000 and remained under $35,000 for most of January.

Bill Gates also seems to be not much aware of how the Bitcoin market behaves based on his comments during the interview as he reiterated claims often put forward by naysayers suggesting Bitcoin does not have any intrinsic value. He also claimed that even though Bitcoin has brought decentralization and digital payments to the forefront, price volatility is an issue for newcomers.

The post Bill Gates Claims People Investing in Bitcoin Should Watch Out As Bitcoin Price Slumps Below $50,000 appeared first on Coingape.