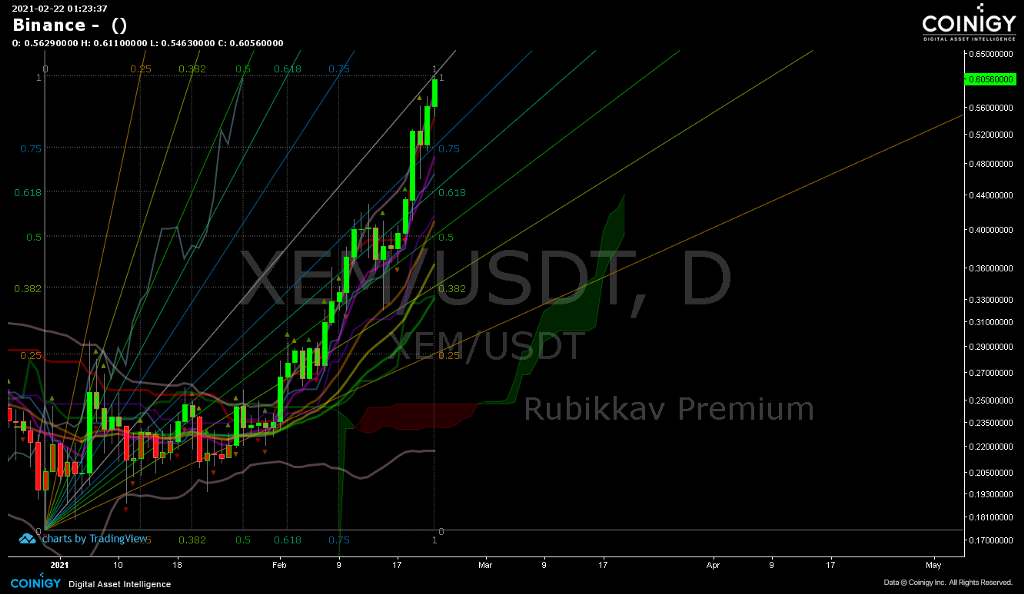 Over the course of the week of February 14–21, 2021 and according to criptonoticias, the market is mostly bullish, largely driven by the growth of bitcoin. The price of more than 90% of the altcoins registered advances that exceed 140%.

The most appreciated cryptocurrencies in these seven days are headed by Stratis (STRAX), whose wrapped token can already be traded on the Ethereum testnet. They are followed by Dash (DASH), which made alliances with several companies throughout the week; and Polkadot (DOT), which is advancing the process of integrating its blockchain networks.

The weekly hit closes with Lisk (LSK), which has an account update process underway; and NEM (XEM), which is moving forward with testing transactions for its Symbol blockchain.

After some corrections, the value of BTC rose significantly from February 16, to reach almost $ 55,000 per unit that same day. On February 19, the cryptocurrency reached a new important milestone in its bull cycle, surpassing 1 trillion dollars in market capitalization.

Optimists will fight to maintain current price levels, but those who have missed many opportunities to buy cheap can simply take advantage of that next wave of correction.

On the other hand, many attribute the breakout of $ 50,000 to the announcement that MicroStrategy, one of the companies leading the wave of institutional investment in bitcoin, will seek to raise another $ 1.05 billion to invest in the cryptocurrency. Although some analysts had already considered that the breakdown of that brand was a matter of time.

Ether (ETH), on the other hand, also increased in value substantially. Their average progress was 12%. The price ranged between USD 1,698 and USD 2,036 in these seven days. By breaking the barrier of $ 2,000 for the first time in its history, the cryptocurrency registered an increase of more than 170% in one year.

This week, the total deposited in the staking of the network’s validators already reaches 3,100,000 ETH, according to data from the Launchpad Ethereum portal. This represents 2.7% of the total supply of ethers.

The above on the positive side. It is worth noting then that we will soon see Ethereum under the great dominance that it has with the correlation with Bitcoin and in a correction phase within the Elliot ABC wave or perhaps accumulation ABCD and long before reaching the next diagonal resistance of the $ 3569.56.

Basically, and in case that correction occurs, we can see the price retracing to approximately $ 1359.59 and the support of the breakout of the previous ATH.

According to information published on his Twitter account, wSTRAX, a wrapped token that will be launched on the Ethereum network on March 8. The announcement was made on February 13, shortly before the network’s cryptocurrency, STRAX, will start to rise in price significantly. On average, it appreciated 140% in seven days.

The plan is for the wrapped token to be used in DeFi applications, and decentralized exchanges that operate on the Ethereum blockchain.

According to the release schedule, the masternode for the trial version of the wSTRAX wallet was set up between February 14–15. On the 16th, the Stratis Interflux chain was tested for interoperability between blockchains, which allowed transactions with the token on the Ethereum Ropsten testnet.

Shortly after this announcement, the value of STRAX peaked at $ 2.51 on February 19. Price growth remained constant throughout the week.

Additionally, Stratis established an alliance with the online travel agency Travala, through which STRAX becomes part of the list of cryptocurrencies that can be used on the website’s platform. Since February 17, holders of the cryptocurrency can make discounted reservations at a large number of hotels and airlines in various countries around the world.

The market capitalization of STRAX is USD 278 million and the daily trade volume is USD 94 million.

The last post on Dash’s Twitter account announces its partnership with OIN, a platform for altcoin betting, rewards and insurance. The team’s idea is to soon launch a Dash-backed stablecoin or pegged cryptocurrency solution, in order to venture into DeFi product development.

The spread of the event coincided with a growth in the value of the cryptocurrency that went from USD 206 to USD 284 on the same day. Average growth was 53% for the week.

Other information related to the cryptocurrency was released the following days and notes that the Dash Investment Foundation invested $ 100,000 in Quadency, a professional trading and automation platform.

Quadency said they are in the process of rolling out an update that will allow merchants to interact with the FastPass payment service through a unified instrument.

The price of DASH remained more or less stable the following days, increasing its value again on February 18, when it was quoted at USD 291. It reached a maximum of USD 329 on February 20.

On February 18, Dash established a third alliance, in this case with the UK-based real estate fund, London Digital Bonds, which operates the SolidBlock platform. This will allow the owners of the cryptocurrency to invest in real estate.

In an update of its roadmap for this 2021, the Polkadot project explained the parameters for the activation of its small networks blockchains or parachains (parachains), which are the essential components of this platform. The publication of the document coincided with the growth of the value of DOT, which this week had an average advance of 46%.

According to the document published on the official site and reported in CriptoNoticias, the parachains will first complete a trial period on the Rococo testnet. They will then go to the Kusama network, operated by the same team, and then join the Polkadot code base once they pass the audits.

So far, about 7 parachains have been attached to Rococo, the team notes on Twitter.

In a note posted on their blog on February 15, the Lisk team urges cryptocurrency users to transact to restart their accounts. Additionally, they explain that the step is required after making updates to the portfolio.

They assure that due to the constant increase in the price that has been observed in LSK for a week, these actions are necessary to keep the account safe and protected.

The value of LSK has been on the rise since last week, when the cryptocurrency also ranked at the top. Lisk entered AirTM’s list of new cryptocurrencies and joined BitFlyer’s staking service, we reported. In these last 7 days his average rise is more than 44%.

According to Lisk’s post, the developers decided to make some changes to the desktop wallet, including the mandatory step of re-registering and transacting. “A new application for account reset comes with desktop version 1.28.0, which will be released next week,” the note clarifies.

All of this occurs while working on a series of changes already announced in the 2021 roadmap, which includes an improvement proposal for a new address system, along with the release of Lisk Core 3.0.0.

LSK’s market capitalization is $ 474 million and the daily trade volume is $ 86.3 million.

The testnet of NEM’s new Symbol blockchain completed a stress test of 400 transactions per second (tps) on February 18. According to the information published by the NEM team, the test worked well and the network maintained complete blocks throughout the process. The definition of the schedule for the launch of Symbol is still awaited.

In the framework of this announcement, the price of XEM, NEM’s cryptocurrency, increased more than 10% in 24 hours to reach the top of CriptoNoticias. In seven days the price went from a low of USD 0.329 to a maximum of USD 0.556 on February 20, for an average weekly advance of 40%.

The cryptocurrency also entered the list of crypto assets for margin trading on the Indian exchange CoinDCX, and on the Malta-based exchange Bequant, according to other tweets released this week.

As of this writing, XEM’s market capitalization is $ 4.789 million and its daily trade volume is $ 358 million.

The Most Weekly Valued Cryptocurrency Market Hits was originally published in The Capital on Medium, where people are continuing the conversation by highlighting and responding to this story.