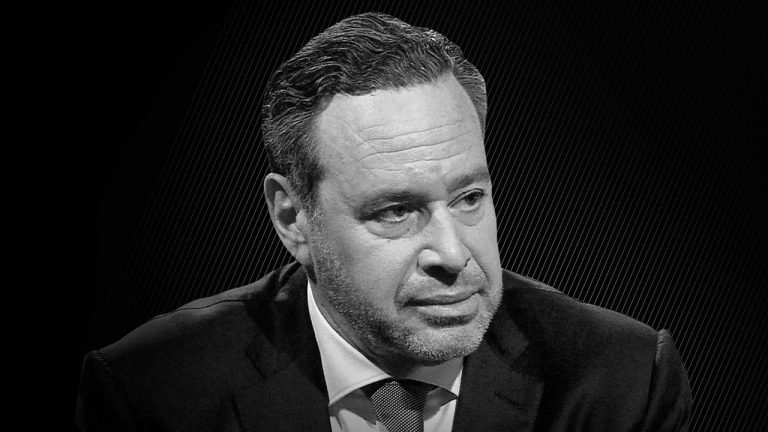 In comments made via Twitter, Frum, who regurgitates the BTC mining inefficiency claims, also attacks the crypto asset’s store of the value proposition. He states that of “all the pro-bitcoin arguments, surely the worst is the store against inflation.” 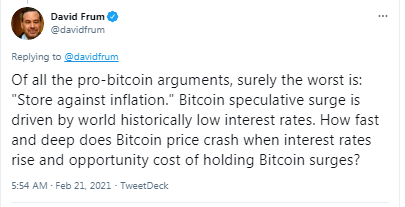 Still, despite this criticism, the crypto asset continues to gain support from institutional investors and large companies. For instance, electric carmaker Tesla, which recently amended its investment policy, revealed it had bought BTC worth $1.5 billion.

Furthermore, according to bitcointreasuries.org, the website that tracks companies or institutions that have exposure to BTC, over 1.3 million coins or 6% of the total circulating supply is held by large corporations.

The True Value of BTC

In the meantime, Frum’s remarks about bitcoin have sparked a debate on Twitter concerning the crypto asset’s true value proposition. For instance, in his response to the remarks, Alex Gladstein, the chief strategy officer with the Human Rights Foundation (HRF), reminds the former speechwriter about BTC’s human rights implications. Gladstein, who recently endorsed the crypto asset, said:

Only 13% of humans live under a liberal democracy with a reserve currency. The other 7 billion+ live under authoritarianism or a weak currency. Bitcoin is a powerful tool for them.

Also, another user named Unfettered Nic Carter shares with Frum the other likely outcome of rising interest rates. The user explains that “if interest rates rise, the corporate sector and the government will be insolvent.” Carter then asks: “What do you think is more likely – we bankrupt everything, or we print our way out?”

Meanwhile, other Twitter users like Lepton939 said they were in agreement with the assertion that BTC provides “immunity from inflation.” Nevertheless, this user expresses concern at the crypto asset’s volatility saying:

“Since the price fluctuates so wildly I’m afraid to hold it. But I’m guessing its real value is the scale of illicit transactions it accommodates.” 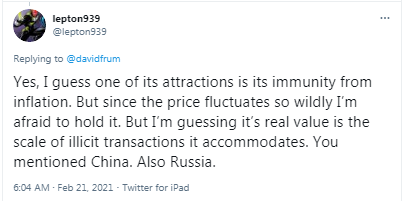 Still, other users like Jeffrey Smith are praising Frum for making these remarks about bitcoin. In his tweet, Smith remarks:

Exactly. Zero intrinsic value (which is related to your interest rate observation); 100% speculative value (= bigger fool theory); & environmental mess to mine. What’s not to like?

While Smith suggests that “gold is very similar” he is however quick to explain that unlike BTC, the precious metal can be used for making jewelry. He then concludes by saying: “There’s no Bitcoin jewelry as far as I know.”

Do you agree with Frum’s assertion that BTC value will crash once interest rates start to rise? Tell us what you think in the comments section below.