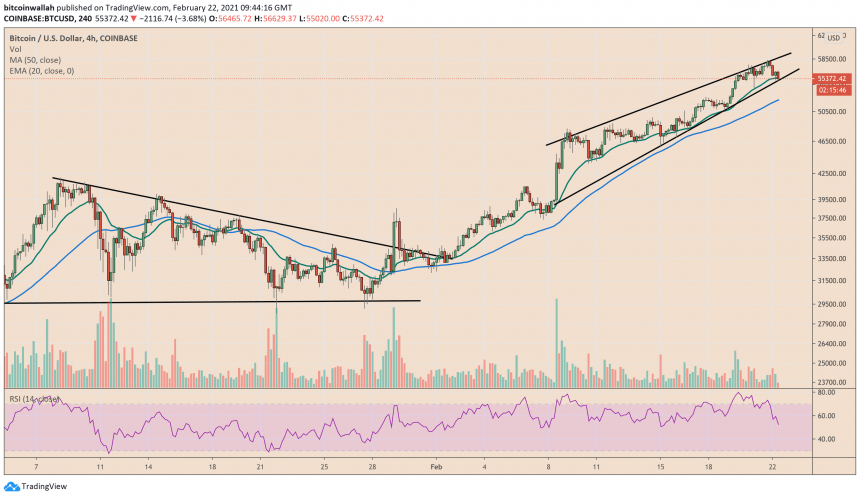 Bitcoin (BTC/USD) sold off heavily throughout the Asian and early European session on Monday after achieving a new record high of $58,367 in the previous session.

The flagship cryptocurrency was down by up to 5.5 percent after the London opening bell, flirting with short-term technical support near $55,550 for an extended bearish breakout move. In doing so, BTC/USD targets the $52,000-54,000 as its next downside target.

Looking from a broader perspective, the pair appeared to have been testing an upward sloping trendline that acts as a price floor to a Rising Wedge pattern. Technically, a break lower risks sending the Bitcoin price lower by as much as the Wedge’s maximum height (which is about $10,000-long).

That puts the cryptocurrency on a corrective course to $45,000—about 20 percent lower from the latest peak.

There is a massive possibility that Bitcoin locates a support area above $50,000 before it resumes its upward momentum. The reason remains its corporate/institutional adoption against the long-term risks brought by inflation and fiat depreciation.

Tesla, MicroStrategy, Square, Stone Ridge Holdings, and many other corporate firms have added billions of dollars of combined Bitcoin worth to their balance sheets in the last few months.

This is not a bear market, just a healthy reset of the markets and actually quite organic for the contiuous growth of the #crypto markets.

Crypto economist Ben Lilly noted in his latest report that the bitcoin accumulation spree among Wall Street firms outran the cryptocurrency’s supply. That led to a liquidity crisis, which persisted amid higher exchange BTC withdrawals and upped retail demand.

Mr. Lilly added that investors have flocked into the Bitcoin market as a means to escape the falling US dollar market. He further noted that those investors would not need to sell the cryptocurrency to realize their profits. Instead, they would collateralize their BTC holdings via decentralized finance services to earn yields.

“In doing so, investors can potentially side-step capital gains tax on their bitcoin while enjoying its price appreciation,” said Mr. Lilly. “And when bitcoin is six figures, it begs the question.”