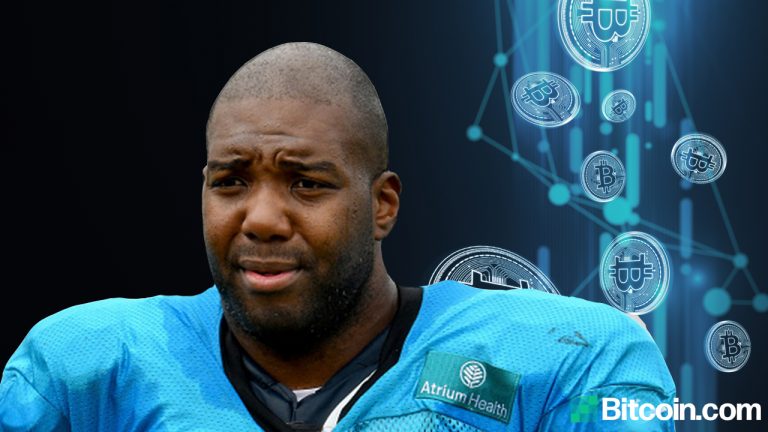 At the end of December, the Carolina Panthers offensive lineman, Russell Okung told the public he would be getting half of his 13 million-dollar salary paid in bitcoin. Moreover, Okung made the decision at the right time, as the National Football League (NFL) just capped the league’s salaries at $180 million. Looking at it from a different perspective, some people think that Okung is now the highest salaried NFL player today because of his decision to stack satoshis.

The professional football player, Russell Okung, is well known for his stance toward bitcoin and well before he was paid in BTC, he relentlessly asked to receive his salary in crypto. At the end of December 2020, Okung shocked the world when he announced he would be getting half of his $13 million salary paid in BTC. As bitcoin has continued to climb higher in value week after week since then, a number of people have noted that Okung has made a lot of money so far choosing to be paid in BTC.

For instance, when BTC hit $44k, the half of his contract that is paid in BTC climbed to $10.59 million, at $56k+ his half turned into more than his entire quoted salary. As far as 2020 NFL salary stats are concerned, Okung has entered the top five position. However, the NFL has recently decided to cap the league’s salaries at $180 million and a ball player’s contract could change in 2021. Because the Carolina Panthers’ offensive tackle (OT) gets half of his salary in BTC, many proponents think of him as the highest-paid player in the NFL and not just ahead of the highest-paid OTs.

“You are the highest-paid player in the NFL,” an individual said to Okung recently on Twitter. “Simply by taking your salary in a different unit of value. Amazing. [It] will not be long before your peers catch on,” he added.

Interestingly, Okung chose the perfect time to be paid in bitcoin, as the NFL informed teams on Thursday that there will be a salary cap this season at $180 million. In professional sports, a salary cap (or wage cap) is a standard guideline that creates a limit ball clubs can spend on a players’ salary. There are also other rules the NFL leverages like first-year players get a minimum of $610,000 annually. Seven-year NFL vets earn a minimum salary of $1 million last year.

Even though Okung is already very much ahead of all the other NFL players, he may be years ahead of the game going forward. “Russell Okung is a genius,” another person tweeted recently. “He’s made so much money from just one check,” the individual added. Okung seemed to have known this was a good decision when he said “getting paid in bitcoin is the first step of opting out of the corrupt, manipulated economy we all inhabit.”

Moreover, Okung said on Thursday that he continues to accumulate bitcoin no matter the price. “I receive a ton of questions about my price entry point into the BTC,” Okung tweeted. “I stack sats, [the] price goes up, I stack some more, [the] price goes down and stack again,” he said. “This isn’t financial advice,” Okung further insisted.

What do you think about Russell Okung’s decision theoretically making him the highest-paid NFL player in the league? Let us know what you think about this subject in the comments section below.